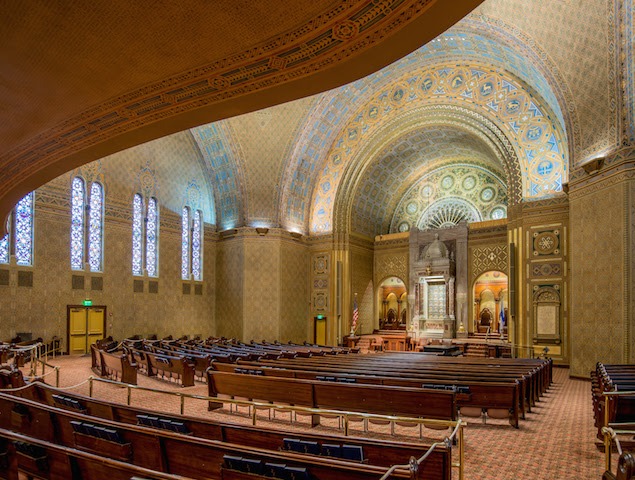 Founded in 1795, Rodeph Shalom is the oldest and largest Jewish congregation in Philadelphia. Its historic building in the heart of the city, built in 1928, has recently undergone major renovation, including a new sound system featuring Renkus-Heinz Iconyx IC Live ICL-FR steered arrays and IC212S-FR subwoofers.

Rodeph Shalom’s sanctuary seats approximately 1,400 and includes a large balcony area. The walls are gorgeously painted with gold leaf dating to the building’s original construction, and soar to a domed ceiling towering 60 feet above. The synagogue hosts a wide range of speakers and events, from small ceremonies to packed High Holidays services. Sabbath services are contemporary, with nine or more musicians and sometimes a choir. So the new system had to deliver full-range music as well as clear, intelligible speech. “The biggest challenge was the shape of the space and the dome,” explained Acentech Senior Consultant, Perry Artese.

“The room is very live, and we had to deal with cancellation under the dome and a lot of flutter echo. We studied the acoustics, and the reverb time was not bad but the speech transmission index ranged from 0.51 to 0.55, which is just fair, so it was hard to discern speech.”

“The old horn-loaded sound system created too much splash and echo,” added Philadelphia Sound’s, Walter Mosetter, who handled the system programming and interfacing. “We weren’t looking for volume so much as clarity and consistent coverage, without over-energising the room.”

Because of aesthetic and architectural considerations-the building is on the National Register of Historic Places-acoustic treatment was unfeasible. Fortunately, beam steering provided the solution.

“We tested several systems,” recalled Walter. “What we found with the Renkus-Heinz IC Live was that not only did it sound better, but the beam-steering technology gave us much more control.”

“We could place the sound precisely, eliminate reflections, reduce overall volume, and get clarity and coverage everywhere. The team opted for a pair of Renkus-Heinz ICL-FR triple stack arrays. The acoustic models showed us we could achieve a considerable SPL throughout the sanctuary,” recalled Perry.

“The triple stacks gave us more than enough power and even more control over the beams than a double stack. The two IC212S-FR subwoofers are used for some events but often the arrays are more than sufficient.” DSP is provided by a BSS Soundweb London system.

The loudspeakers are mounted to steel columns. “The columns provide enough offset that they look like the speakers belong in the space instead of being stuck on a wall,” noted Walter. “This worked with the aesthetics of the architecture so everyone is happy, and it let us place the speakers optimally, making tuning the system easier.”

The team’s hard work and research paid off for Rodeph. Walter summed it up: “It was a challenging project and a challenging space, but the Renkus-Heinz IC Live system was really an ideal solution.”