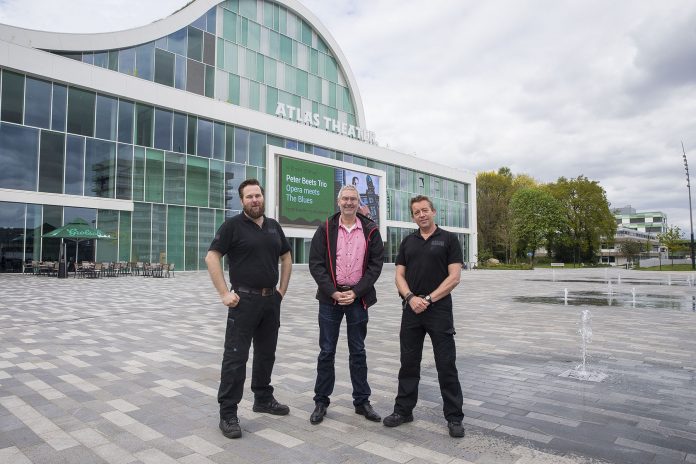 The newly built and inaugurated Atlas Theatre in Emmen, Netherlands is a multifunctional performance space in the heart of the city and part of a €250 million development.
In addition to the two Atlas auditoriums, with capacities of 822 and 300, the complex also includes a full convention centre, catering outlets, offices and is an access point for the Wildlands Adventure Zoo.

The plan to replace the old De Muzeval theatre in the city actually took around 40 years to come to realisation. The construction eventually commenced in 2014 and was finished in 2016, with its spectacular, gleamingly modern architectural style, the state-of-the-art facility opened in autumn of last year. In the meantime, the technical specifications had been completed by acclaimed Amsterdam based theatre consultants Theateradvies and the bid to supply lighting was won by Controllux.

Twenty four moving lights were on that space, for which Controllux proposed 12 x Robe DL7S Profiles and 12 x BMFL Spots as the most practical and flexible premium-brand options for the theatre. The project was managed for them by Kuno van Velzen.
The construction company completing the build is also responsible for the building’s maintenance for the next 20 years, so reliability was key to choosing kit.

The technical team led by Koos Maris and including Nick Unij and Jan Honouwer, both of whom were involved with the old theatre, were delighted with the choice of Robes. The original plan was to have 24 x BMFLs but they hadn’t seen the DL7S Profile at that point as it had not been launched. However, when they did at PLASA 2015, explained Nick and Jan, they decided to test them thoroughly and were pleased with the results, able to then tweak the spec so the equipment could be included.

Specially designed for theatre and television applications, low noise was a feature making the DL7S an attractive choice, especially for classical events where you can hear a pin drop. So quietness together with the excellent colours and the framing shutters, handy from anything from a conference to a live art performance, plus the LED lightsource being sensible from a longevity aspect all helped. “It’s an adaptable fixture that consumes very little power” says Nick, adding that they also find the colour temperature correction very useful.

The BMFLs on the other hand hand, are well respected for their brightness, colours, smooth and even output, striking gobos, etc. and the fact that it can double as a wash fixture. The BMFLs and DL7Ss have already been used extensively on a wide variety of events and they are a “great combination” confirms Nick.

The Atlas Theatre is a busy receiving house for theatre shows and tours whilst also hosting numerous major conferences, amateur and community productions as well as an annual singing contest which is televised locally. It’s in use almost every day of the year. The new Robes are the envy of many of the guest crews, and right now the Atlas theatre is one of the best equipped in the Netherlands. They also have cutting edge audio, video and rigging kit and facilities making them totally self-sufficient in all the production elements.
The technical team provide the full lighting service to any show that does not have its own LDs or technicians which accounts for around 20% of the incoming work, whilst also working closely with the 80% which do have their own touring crew, who will also generally be using the house equipment including the moving lights.

The Atlas is a stellar improvement technically on the old theatre which had a low ceiling, no flying facilities and seriously restricted creativity however, now they can offer clients and visiting artists as well as companies the very best. The old house did actually have some old Robe fixtures as well, ColorWash 250s which were purchased second hand 6 years ago and are still going strong and in ‘very good shape’.

Jan, who’s worked at the Emmen theatre for 25 years can remember even further back than that when they had fixtures badged as other brands which were made by Robe back in the days when they were an OEM manufacturer. “Their units were always exceptionally well made and it’s great to see the way things have developed, the growth and the commitment to quality continuing. As a brand, Robe is always innovating and there is never a still moment,” he stated.

They are also seeing increasing amounts of Robe coming in with visiting productions on their touring packages and especially in the last couple of years with leading rental companies like Ampco Flashlight and Rent-All making large investments in the brand.