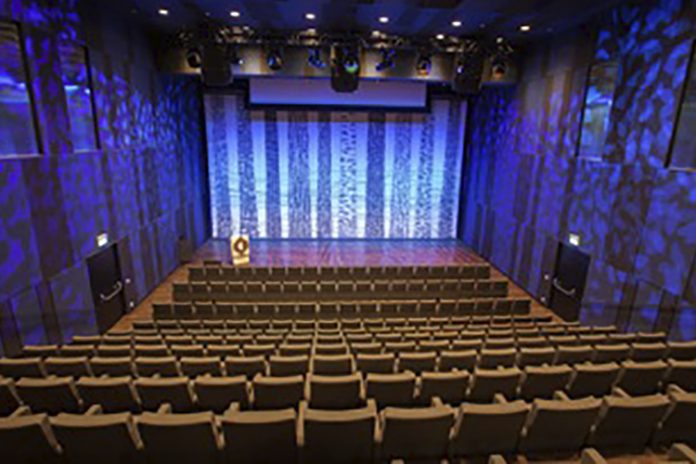 The brand new Eesti Rahva Muuseum (Estonian National Museum) in Tartu has recently opened in a fabulous new single story state-of-the-art 350-metre long architectural masterpiece resembling a portion of a runway lifting upwards, built on the former Raadi Air Base just outside the cultural hub and second city of Tartu, and near to the site of the original Muuseum at Raadi Manor.

Around 100 Robe LED fixtures – a mix of DL4S Profiles, DL4X Spots, LEDBeam 1000s and CycFX 8s have been specified and supplied for the Muuseum’s three main performance, event and conference spaces.

A government tender was issued for all the various technical elements. Andres Sarv, head of lighting at Tartu’s Vanemuine Theatre was brought in as a consultant for lighting and visuals, and he recommended the choosing of Robe after having an excellent experience with various Robe moving light and LED products at Vanuemuine’s three busy venues.

“Our Robe fixtures have been installed for three years now and are working every day! They have proved super-reliable as well as excellent creative tools,” he commented.
He and the Muuseum’s deputy director Viljar Pohhomov looked closely at their different venues and the activities planned for them, and based on this information, Andres also suggested the type and style of the fixtures together with Olev Luhaäär from Robe’s Estonian distributor, Tallinn based E&T.

The Muuseum is a beautifully streamlined modern space carefully designed to maximise natural light by French based DGT (Dorrel.Ghotmeh.Tane) Architects.

Sustainability is central to all Estonian new build projects, so the choice of LED fixtures fitted all the “green” requirements as well as being practical and dynamic to meet all the demands of a modern theatre, performance, conference and event venue.

The Rahva Muuseum project has been ongoing for over 11 years, so the very first provisional specs for around 200 conventional lights was modified more recently as the newest LED technology came on-stream!

The Robe lights are divided between the three areas although they can be moved about as necessary and also utilised elsewhere in the building if needed.

The Conference Hall can accommodate around 250 people for presentations and lectures and this currently has 10 LEDBeam 1000s, 10 DL4X Spots and eight CycFX 8 units installed in the roof.

There is an adaptable event space in the middle of the building with glass walls and four overhead trusses, so available lighting here currently includes 24 of the DL4X Spots and 20 LEDBeam 1000s.

The third space is the Theatre Studio, a fully flexible space that holds between 160 and 200 depending on the configuration, and this usually has about 11 LEDBeam 1000s and 29  DL4S Profiles in the roof, hanging below a tensioned wire grid.

E&T also supplied lighting consoles to all venues as part of the deal. The lights are being looked after day-to-day by Karl Marken heading the lighting department and one of a technical team of seven employed by the Muuseum.

He previously worked at one of Tartu’s theatres with lots of tungsten sources. While he had not used LED extensively before taking up this post at the Muuseum, he had some experience with Robe products as they are very widespread in Estonia thanks to the hard work of E&T which sees them in numerous venues and key rental companies.

Karl thinks the LEDBeam 1000s are very powerful and that the zoom is “amazing”. He likes the brightness of the DL4X Spots and DL4S Profiles along with their smooth dimming.
The Muuseum opened at the end of 2016 and is already accommodating an average of four events a day across the central event space, Conference Centre and Theatre.

The new Eesti Rahva Muuseum is a building of great national pride and significance and it is a huge honour for Robe to be the moving light brand of choice there.

The original main museum building at Raadi Manor was opened in 1922 and destroyed in the Tartu Offensive when the Russians recaptured Estonia from the Nazi’s in the Second World War.

What was left of the culture and artefact collection (that had resided in the museum) was hidden in various spaces in and around the city, and the airfield became a secret Soviet bomber base, effectively closing Tartu off to foreign visitors.

All that has now changed radically. The essence of the building design – DGT won an international competition organised by the Estonian Ministry of Culture and Union of Estonian Architects – makes it a continuation of the airfield with the roof lifting and expanding towards ‘infinite space’ … inviting visitors to simultaneously enter the landscape and the heart of the Muuseum.

The project is central to the regeneration of the area and a bold testament to how Estonia is looking forward to the future as a modern, young (it gained independence from the former USSR in 1991) and well developed democracy with high expectations and aspirations.