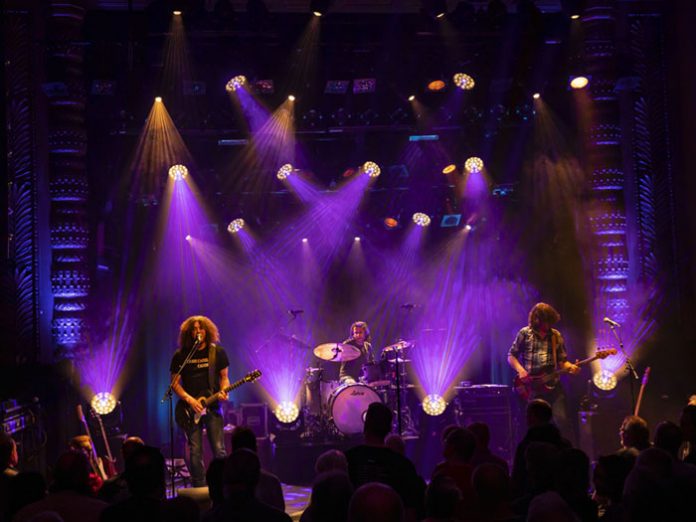 Luxor Live is a funky music and performance venue in central Arnhem, the Netherlands with a colourful history that started in 1915 when it was opened as a film theatre. Architect Willem Diehl was responsible for its spectacular art deco look and features, which has also earned it ‘listed’ status. It was purchased by the Municipality of Arnhem in 2002, fully renovated and re-opened in its current format in 2008.

The main hall capacity is a cosy 700 including the balcony, and the stage is scalloped out of an elegantly curved auditorium which features an individually pixel-controlled LED architectural lighting scheme that highlights the interesting shape and original ceiling art and sculptural features. There is also a small hall on the first floor with 200 capacity.

The venue is currently operated by a not-for-profit organisation (Luxor Live) and subsidised by the city of Arnhem, and the DL4Xs and DL4Fs were their second recent Robe addition following the Spiiders and LEDBeam 150s.

When the venue was first reopened in 2008, some Robe ColorSpot and ColorWash 250 ATs – 10 of each – were installed. They served really well, but after 10 years of hard labour it was time to upgrade and modernise.

Fon and his team started thinking about what they wanted in a modern fixture.

LED was high on the list to reduce power and maintenance. They needed brightness, good colour mixing and a proper zoom, but most important was that any fixtures had to be truly versatile and properly multifunctional to deal with the extremely eclectic programme of shows. These include concerts and dance events/club nights encompassing every genre of music – techno to trance, acapella to alternative rock, reggae to R ‘n’ B – also including spoken word events plus conferences and presentations. You name it … they do it!

Fon was impressed with how versatile and dynamic Robe fixtures are generally. “There’s definitely a lot of thought going into how the lights can be practically used in different scenarios,” he commented.

Fon had used various Robe products before working at Luxor Live five years ago, but not any of the ones that they have bought.

For Fon, the DL4X is a flexible spot producing a nice solid beam when irised down that also functions well as a stage wash with a frost filter applied. “We needed to have cool gobos for club nights but enough refinement to be able to light theatre shows appropriately.”

They considered other options as well but kept returning to the scalability and breadth of the Robe ranges which allows an incremental stepping up of products.

Onstage, the lights are rigged on three trusses, the upstage of which can be trimmed at up to 4.5 metres and the front two if necessary up to 7 metres, although it’s not standard to have them that high.

With a compact amount of available stage and roof space, small fixtures were needed. Anything above the audience has to be rigged by the crew on a genie lift, so they wanted lightweight units as well to make this a practical task to handle.

Taking all these overall requirements into consideration, Robe ticked all the boxes every time!

“It’s a great rig for this venue and we keep getting lots of positive comments from visiting LDs,” said Fon with a big smile.

While most artists will bring their own LD or operator, Fon still enjoys lighting interesting concerts and techno parties, and there is a pool of regular freelance LDs called on for most events as required. For lighting control, there is an Avolites Arena and a Pearl Expert Pro in the main hall and an Avo Quartz for the small one.

Luxor Live has worked with Robe’s Benelux distributor Controllux since 2008 and has developed an excellent relationship for service and support which is such a vital part of the equation for any busy live music and show venue.