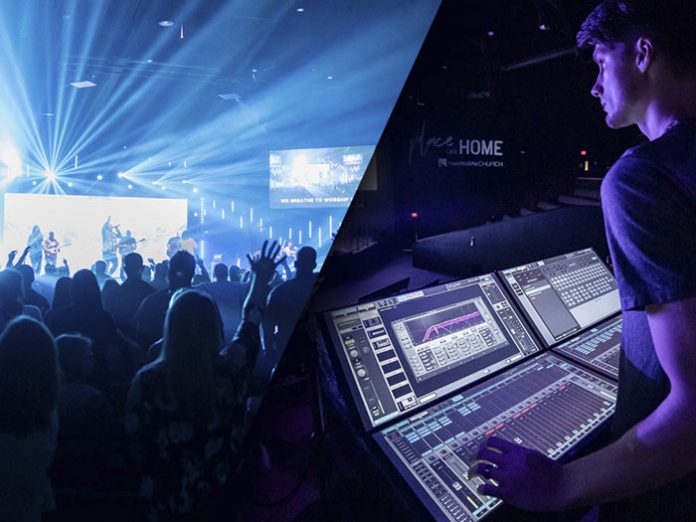 Road to Life Church, an evangelical Christian megachurch located in Michigan City, Indiana, led by pastors Dave and Vanessa Gargano, has chosen Waves products for its FOH, monitor and broadcast stations, including the eMotion LV1 Live Mixer. Road to Life’s main campus in Michigan City seats 1,500 and is equipped with three eMotion LV1 consoles. The church’s smaller campus in Chesterton, which seats 300, is served by a portable A/V setup that is loaded in and torn down every Sunday.

Trevor Wright, Technical Director of RTL, described the setup at the main church campus: “We are running a 64-channel eMotion LV1 mixer, a Waves SoundGrid Extreme Server, a DiGiGrid D SoundGrid-compatible audio interface, and a switch at a mixer. All three LV1 mixers are connected to three DiGiGrid IOX audio interfaces on stage, and to a DiGiGrid MGB (a coaxial MIDI interface). We run keys and Ableton off Waves SoundGrid drivers, going into the MGB to split to the other two desks. The FOH board has four monitors screens, the monitor mixer has two monitor screens, and the broadcast board has two as well with an Icon Platform M fader controller with a D2 display screen. The monitor console is the master and shares all the I/O-out to the other mixers. At the FOH station is an Alienware X51 desktop, and the other two computers for Broadcast and Monitors are ThinkCentre i5. At our portable A/V setup (loaded on Sundays at our Chesterton campus), we run an additional eMotion LV1 mixer (64 stereo channels) with two Dell P2418 HT touch screens, connected to one DiGiGrid D and two DiGiGrid IOX audio interfaces.”

Trevor explained Road to Life’s decision to go with eMotion LV1: “We wanted to update to a larger-format console from our X32, and I wanted to separate FOH, monitor and broadcast. We have always had issues with the bands’ in-ear monitors as well as at front-of-house — not enough gain, EQ issues because of frequencies we had to cut due to room sound, gating on drums (drummers hate gates!), over-compressed in-ears… We wanted a system that would help us solve all that. Being able to share I/Os across all three consoles, without extra hardware, was also very important.”

“For me, eMotion LV1 had three main selling points: First, being able to use eight plugins per LV1 mixer channel, available from within the mixer itself. The plugins are amazing, and I find myself spending less time changing EQ and compression week to week. Second, the SoundGrid drivers. These drivers are so simple yet so powerful and easy to set up. No I.P. addresses, just download the driver, plug-in Ethernet, and it’s there and works without hassle. We use the Waves SoundGrid Driver to connect our keyboards, Ableton and ProPresenter, as well as for recording. And, third, the price. I was able to get all three consoles for less than the cost of one large-format digital console from other companies!”

Trevor added: “Sound checks have been so much faster. One of our campuses is load in/out, and we used to spend about 20 minutes just EQing and compressing drums each week because they never sounded the same with the X32. With the LV1, I set it up the first week and I haven’t had to think about it since. It helps create a consistent sound. Also, training volunteers on it has been really easy. The layouts make it very user-friendly even for people who have never mixed before. The sound quality is unmatched; especially at 96k, it produces incredible sound. The main feature that makes it unique is that it combines a digital soundboard with a DAW. Anything I can do in Pro Tools I can do on the LV1, and anything I can do on a digital/analogue mixer I can do on the LV1 as well.”

He remarked, about using Waves plugins, “We put the Waves V-Series on everything. The musical sound of the V-EQ4 equalizer is absolutely amazing: it really helps us shape our sound. And the V-Comp compressor keeps everything tight: it works wonders on our vocal group, pushing the vocals forward and sitting where I want them to be in our mix. We also use the C6 Multiband Compressor on vocals to compress any frequencies that peek out or that we don’t want to cut completely out of the mix.”

“The plugins that are included in the eMotion LV1 channel strip are fantastic too. The eMo D5 Dynamics’ gate/expander is incredible: we use it on drums and vocals. Being able to side-chain to any channel or group is amazing. We also use the eMo D5 to side-chain to the snare for a gated reverb effect. The eMo Q4 Equalizer has a really nice EQ, which we use in order to fix any problem frequencies. Another favourite is the Waves SuperTap delay plugin. It’s incredible to have stereo slap delay, short delay, and a long delay in one plugin, at different volumes, mono or stereo, and any pan position you want. We often use it on mono guitars panned left or right, which are sent to an aux with SuperTap 2 on it. Through the SuperTap plugin’s panning option, we then pan the other way while setting it to 80ms turn off direct, which makes a very spacious feel in the mix. When it comes to reverbs, we use the H-Reverb Hybrid Reverb on vocals; it does an amazing job. Waves TrueVerb reverb has very low DSP, and we use it on everything from vocals to drums and guitars.”

He continued: “We use the Waves SSL G-Master Buss Compressor in a couple of different ways. We use it as a master bus compressor, which works great at glueing a mix together. At broadcast we use it on our groups as parallel compression; we group everything individually—drums, bass, guitar, vocals, keys—and we then slam the compressor and continue to fade it to help fill the mix. It brings everything forward and adds a lot of spread and depth to the mix while keeping everything at an acceptable volume. It makes our mix sound way larger. We also use it on our vocal reverb side-chained to our vocals, so it keeps the verb lower while there’s singing, bringing up the tail of the reverb at the end of phrases.”

“Many more Waves plugins are our go-to’s. We rely on the H-EQ Hybrid Equalizer for very precise EQ; the RTA (Real-Time Analyzer) works wonders pinpointing problem frequencies. We place the L1 Ultramaximizer on our master bus to keep everything at the volume we want and to protect our gear. The F6 Floating-Band Dynamic EQ, when used in a side-chain, is incredible. We put it on our guitar bus and dynamically EQ 1.5–2k every time the vocals come in so that it leaves room for the vocals. We also use it on our bass guitar at 60 Hz, side-chained to our kick so that the kick can come through and we are only subtracting that frequency instead of the whole bass guitar.”

“Waves Tune Real-Time is a remarkable plugin, too. It keeps everyone in tune, and the way the vocals blend is unbelievable. We use it on all our vocal channels at 50%. What’s great about it is that at 50% you can hear the difference that it makes on the vocals when they are singing, but when they talk it isn’t noticeable. This saves us from constantly turning them on and off throughout service.”

Trevor summarised: “We have a rotating band which means different singers, different guitar players (not to mention guitar rigs!), keyboard players, drummers, and bass players every week. With Waves’ eMotion LV1 mixer and Waves plugins, I’m able to quickly and easily dial everybody in at the beginning of rehearsal. There are very minimal tweaks that we have to do when singers change—and that has been a lifesaver for me and the team.”