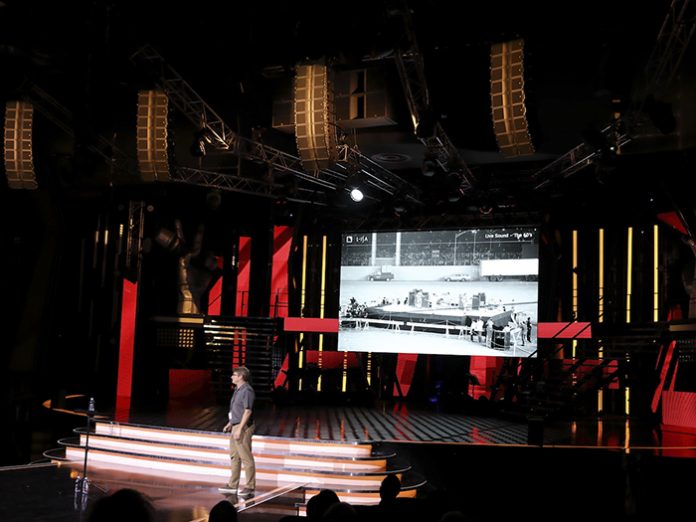 DWR Distribution presented an exclusive L-ISA technology demo experience at the Mosaïek Teatro in Fairlands, Johannesburg, home to The Voice South Africa, which was attended by over one hundred innovation-seeking industry leaders from rental companies and television studios, as well as creative luminaries on 18th June 2019.

The new L-ISA technology from L-Acoustics was used for the first time in South Africa by Multi-Media for the live edition of The Voice South Africa 2019 and the industry were keen to hear how object-based mixing and immersive audio could benefit audiences. The demo was presented by Tim McCall, Regional Sales Manager and Tony Szabo, Head of Touring Applications at L-Acoustics, along with Chris Pugh, Technical Support at DWR Distribution and Adriaan van der Walt, Audio Engineer at Multi-Media who specified L-ISA technology for The Voice.

“I think it’s awesome that L-Acoustics have invested so much into South Africa,” said Duncan Riley of DWR. “We are one of their smaller markets, yet they treat us no differently to the larger players. Their passion is contagious, and it really does feel like a family. We received an overwhelming response at the demo from the entertainment industry and I would like to thank everyone for being there.”

L-Acoustics, a France-based company, is a world leader in professional audio. “L-Acoustics is a technology company, whose greatest investment and pride are the people who work there and who contribute to constantly moving the industry forward,” explained Tim McCall.

With 24 per cent of the L-Acoustics team in R&D and application engineering across disciplines beyond pure audio, such as mechanical and fluids engineering, software, embedded electronics, and material science. When you buy L-Acoustics, you can be assured that you are investing into research and development.

L-Acoustics are at the forefront of the industry shift to immersive audio. “Over six million spectators have enjoyed over two thousand performances in L-ISA so far, and we have sent out people to gather information from the audience to see if they enjoyed the production and noticed a difference,” said Tony Szabo. “The feedback has been overwhelming, from people commenting that they felt closer to the performance, to artists saying that they receive a greater response from the audience.”

L‑ISA technology enables artists and productions to deliver new multidimensional sound experiences to audiences of all sizes. The technology offers a new creative palette to artists and their teams. Whether seeking expansive realism or unbridled imagination, the sonic possibilities are unprecedented and infinite.

Without knowing what to expect, the South African industry leaders were greatly impressed by the L-ISA demonstration.

Seed Obia, a third-year ASE student who has just started his own company called Seed For Sand said: “It’s pretty amazing. To me, I call it wide stereo imaging. Because when they were switching from stereo to L-ISA you hear the spread. When they switched to L-ISA it’s more like spread images.”

“What stood out for me was how suddenly all the instruments and the different channels all came out separately… a great separation between channels. Music in itself affects human emotions so essentially when you get to clarify, or make more clear the different instruments so that you can hear it better, instead of it being one muddled mush, it has no choice but to affect you emotionally.” said Llewellyn Reinecke from Gearhouse South Africa

Llewellyn’s colleague, Stuart, agreed: “The demo was special, quite amazing and makes you rethink audio. Gearhouse were the first in SA to have L-Acoustics. We shall inevitably have to go this route too because it’s too clever not too.”

“It’s exciting to see where we can go with this. We are going to get to a point where we can only be limited by your imagination. Where we are currently faced with ‘The PA can’t hang there because there needs to be screens and lights, it is going turned around, to say the speakers are going to be hung there and your stuff can be around that.” said Petru Palmer, Festival Sound.

Lester Constance from Crystal Church said: “I’m in the church industry and we have an L-Acoustics system and I think with choir and band and backing vocals we have a big array of musicians and this would be ideal because it changes your mixing style. You can pull the vocals further out, the choir coming in on the back and so forth. Very, very interesting.”

“The demo was truly impressive, the amount of depth and width added to the whole performance,” praised Chris Serfontein of Thrive Productions

Alex Van Dyk from Solid Group said: “Looking online at what the system does and how it creates a space for each channel, you think coming here that you would know what to expect – but it really blows you out the water. It was impressive. The amount of definition and clarity is what stands out for me, which you just don’t get out of the stereo mix.

Chris de Lancey, Director at Multi-Media, summed up the benefits of L-ISA technology: “Having done 7 seasons of The Voice locally, Adriaan van Der Walt and I  agree that, audience participation in the live show was noticeably more enthusiastic than previous seasons. We cannot wait to deploy this groundbreaking technology to the local industry at large.”

DWR were overwhelmed with the interest and number of industry leaders who attended the demo. “To be honest, I knew the demo would be well received and that people would like it,’ said Chris Pugh of DWR. “But it’s still a nice feeling watching people experience L-ISA for the first time. I was very proud to be part of this journey.”