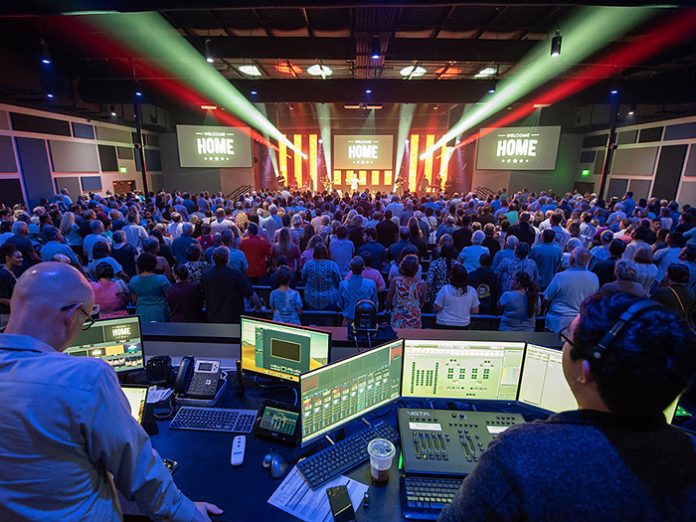 Bayside Community Church is a vibrant and growing multi-site church with eight campuses across the central Gulf coast of Florida. After many years as a mobile church meeting in a local school, Bayside’s West Bradenton location opened its own dedicated facility last fall. Featuring an 800-capacity main auditorium, alongside separate kids and youth spaces, the large worship centre has been equipped with an extensive lighting system comprised entirely of fixtures from ADJ and sister company Elation Professional.

The job of designing and installing the whole audio, video and lighting system for the new facility was given to the Crown Design Group, which is headed up by Ben Graham and Garrett Walker. Ben and Garrett have a long-standing relationship with the church that goes back many years as they actually first met while both working as part of the in-house production staff. As the size and influence of Bayside Community Church grew, they began increasingly to be approached by other churches looking for help and advice for their own technical systems. This led to the founding of the Crown Design Group in 2012, which has itself enjoyed phenomenal growth. The company now supplies and installs equipment at many churches throughout Florida, while still remaining the preferred supplier for all Bayside campuses.

West Bradenton is one of Bayside’s longest-established locations, however, up until last year, it didn’t have its own building, instead, meeting in a local school. This meant setting up and tearing down their audio, lighting and video system every week; this not only meant a lot of work for the tech team but also limited the creative potential of what could be achieved. Despite seeing sustained growth, the church struggled to find a suitable building in West Bradenton. As a well-established commercial area that was already fully built out, land for a purpose-built worship centre was not available and finding an existing building available for sale that would fit the church’s needs proved to be a long process. However, eventually, they were able to acquire a large building on a strip mall that had previously housed a grocery store. This building was completely gutted and retrofitted for use as a worship facility, including the installation by Crown Design of a full professional audio, video and lighting system.

Having previously installed ADJ lighting equipment in other Bayside Community Church Campuses – including the large kids’ room at their East Bradenton location – Ben and Garrett specified more than 120 ADJ fixtures for the new West Bradenton facility, alongside a number of other products from ADJ’s sister company Elation Professional. These fixtures are spread across the main sanctuary and also the youth and kids’ halls, which both also benefit from full professional-standard production. Power draw was kept to a minimum by relying fully on LED-based fixtures, which also have the additional benefits of keeping the temperature down on stage and removing the need for regular lamp replacements.

Front lighting in the main auditorium is covered by eight of ADJ’s potent Encore FR150Zfixtures. Each featuring a 130W warm white LED engine and a large 8-inch Fresnel lens, they produce a wide, soft-edged beam that is ideal for illuminating stages. “For the money, these really are great Fresnels,” commented Ben. “They produce a really nice output and have a useful, manual zoom range [8 to 50-degrees] which helped with carrying out the initial install but also means that the church has plenty of flexibility if they want to move things around in the future.”

In addition to the FR150Zs the Crown Design team also installed eighteen of ADJ’s Encore Profile 1000 Color LED-powered Ellipsoidal fixtures in front of the stage. Offering a manual zoom range of 12 to 30-degrees and harnessing the power of a 4-in-1 RGBW 120W LED light source, this is a versatile stage washing tool. “The guys at the church really like the Encore Profile 1000 Colors because they don’t just do white,” explainsdBen. “As well as lighting up the stage for the sermon they can ‘double-dip’ and use the same fixtures for washing the stage with colour during the pre-service or portions of the worship time where they want specific colours.”

For the rig’s main moving light, ADJ’s Vizi BSW 300 was selected. Powered by a specially-designed 300W white light LED engine, this versatile fixture offers true hybrid beam, spot and wash functionality. “The church wanted a versatile moving head fixture and, after doing some research, we found that the Vizi BSW 300 was the brightest light we could get for their budget. It’s output really is impressive, as is its versatility; being a hybrid, the same fixture can be used for aerial beam effects, GOBO projections and colour washes. They are used to silhouette members of the worship band and also to add movement and energy during worship sets.”

The church’s children’s ministry, Bayside Kids, has a variety of classroom spaces for bible teaching divided by age group. However, for some portions of each session, all of the children come together into the main kid’s hall. “When they come into this room,” explained Ben, “it’s all about visual craziness. The music is pumped up and the kids can dance around, play games and generally have fun. It’s almost a nightclub vibe, with lots of colour and light beams shooting everywhere.”

While all of Bayside Community Church’s campuses are different in terms of their technical equipment, they do strive to create a common aesthetic and that is particularly evident in the kid’s space. One of the signature themes is exposed aluminium truss and for West Bradenton, Crown Design supplied and installed a large floor-standing structure made from Global Truss America F34 quad trussing. This features a distinctive front archway, which almost touches the ceiling, and is all illuminated using ADJ’s 5P HEX LED par fixtures.

The moving heads installed in this space are ADJ’s Vizi Hex Wash7 and Focus Spot One fixtures. Each Vizi Hex Wash7 features seven 15W 6-in-1 LEDs and offers motorized zoom for a variable beam angle of between 5 and 55-degrees. Meanwhile, the Focus Spot One is an incredibly compact and affordable LED-powered moving head spot that offers a host of advanced features including motorized focus and replaceable GOBOs. “We had custom ‘Bayside Kids’ GOBOs made for the Focus Spot Ones,” explained Ben, “and they look very effective. Despite only having a 35W LED, this little head is really quite bright and holds its own alongside all the other lighting in the room. We put four on the stage and two more on a lighting bar further back in the room which allows us to hit the floors and walls with the logo on a slow spin and it really sets the mood for when the kids come into the room.”

The space also features ADJ’s Saber Spot RGBW compact colour mixing pinspots, which are grouped together in clusters of four and used to create midair ACL-style beam effects across the stage. “I really like the Saber Spot,” enthused Ben, “because it has a really intense beam that looks great in a haze, but also because it has those trailing DMX pigtails so that if they are positioned together they can be linked without the need for any extra signal cables.”

The stage’s repertoire of effects is rounded out by four of ADJ’s Penta Pix units as well as two of Elation Professional’s ACL 360 BARs. “I really like the Penta Pix for creating eye candy beam effects,” explained Ben. “We can throw it in one area and then angle each beam individually. The beams are so tight they create a cool look in haze and the RGBW colour mixing and individual control means that we can create some nice chase effects.”

Stage washing duties in this room are again covered by ADJ’s Encore Profile 1000 Color, this time paired with the smaller Encore FR50Z Fresnel fixture. With a 6-inch lens and a 50W warm white LED engine, this compact fixture is the ideal choice for illuminating smaller stages while offering all of the same features as its bigger brother.

The final worship space in the facility is the dedicated Youth room where the church’s teenagers gather for their own high octane worship sessions and dedicated bible teaching. In this space, which sits between the main auditorium and kid’s room in terms of size, stage lighting is once again handled by a combination of ADJ’s Encore Profile 1000 Color Ellipsoidals and FR150Z Fresnels. Meanwhile, warming of the six upright trusses which make up the stage set, as well as additional stage colour washing, is taken care of by further ADJ 5P HEX fixtures.

Midair beam effects are generated by eight ADJ Saber Spot RGBWs, grouped into two clusters of four on the outside vertical trusses, as well as four Elation Professional E Spot III moving head spot fixtures positioned on the stage itself. In addition, four Vizi Q Wash 7s are positioned on top of the four largest vertical trusses to provide additional beam effects as well as stage washes. “Whenever budget allows,” explained Ben, “we like to throw in dedicated wash fixtures to create a different type of moving light effect to sharp spot/beam projections. Thanks to their motorized focus, the Vizi Q Wash 7s can either be used to create tight shafts of light for another aerial effect or broad washes of colour for the stage.”

As the accompanying photos and video show, the Crown Design Group have managed to give each of the three spaces within Bayside Community Church’s West Bradenton campus a distinctive lighting setup that is both impactful and versatile. This hasn’t gone unnoticed by Mark Childers, the Campus Pastor, who commented: “For us, it’s important that we have what we call the ‘Bayside Experience’ for those new folks who come in; through the Crown Design team’s help we have that wow factor. It turned out way better than I could have imagined. I definitely would work with them again in the future; these guys are professional, they have integrity and they are really committed to the project at hand. I also know they have a heart for us, they want the church to succeed.”

With testimonials like that, it’s clear that the Crown Design Group is destined for continued success, both supplying Bayside Community Church as it continues to expand and a growing client base of other churches. And, since Ben told us that the installation of all the ADJ products on this job went without a hitch and, six months later, everything is still running flawlessly, we look forward to supplying our professional lighting products for many more successful installations.