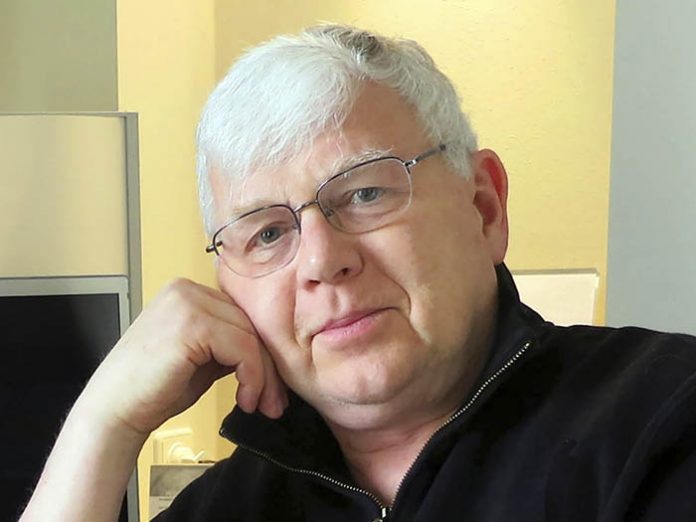 Renowned audio engineer Robert Schulein, beloved son of the late Arthur and Jeanette Schulein, peacefully died in his home on New Years’ Day 2019 after a valiant, seven-year battle with cancer. The Fellow and Past-President of the International Audio Engineering Society and prolific inventor, with a wealth of patents to his credit in the fields of acoustics and electroacoustics, is survived by his wife, Joyce, and two daughters, Heather Davis and Jennifer Yoder and their son, Max Yoder, brother Thomas Schulein, nephews Michael and Robert and their daughters Harriett and Eloise. He was 76.

Born in 1942, Robert was raised in Rockford, Illinois and showed early on a knack for technical tinkering. He went on to receive BSEE and MSEE degrees from the University of Wisconsin, Madison, where he did research on piezoresistive semiconductor transducers. It was right out of college in 1966 when Robert landed what would become a thirty-year career at Shure Brothers Inc. in Evanston, Illinois. Achieving the title Staff VP & Director of Business Communications & Industrial Products, his responsibilities included research & development of microphones for automotive cellular telephone systems, R&D of microphones for land, mobile and related communication systems, as well as R&D of microphone systems for speech recognition applications. In 1977 he was elected to Fellowship in the Audio Engineering Society and that same year also won the Audio Engineering Society Publications Award. In 1990 Robert was awarded the Audio Engineering Society Board of Governors Award.

His earlier work at Shure was in the area of condenser-microphone research, development and design. He led the group effort to introduce Shure’s first professional condenser microphone, the SM-81. While at Shure, Robert managed the Home Theatre Sound (HTS) division, which pioneered the development of the first enhanced matrix decoders emulating the professional Dolby products in theatres. This work led to the development of a complete line of processors, power amplifiers, and loudspeakers for high-end home theatre systems, predating the introduction of THX performance concepts. The HTS division also developed and pioneered the use of enhanced matrix encoders and decoders for professional applications. He also introduced matrix surround-sound encoding to baseball television broadcasting, episodic television, Saturday Night Live, The Grammy Awards, and Super Bowl XXIV in 1990.

After his time at Shure, Robert held positions at Etymotic Research, Inc. (now Lucid Audio), in design, research and development. During this period, his focus was in areas of consumer electronics, professional audio, telecommunications systems, audiology, and hearing-aid component development.

At the time of his death he was owner of RBS Consultants, an international consulting firm, which provided consulting services in areas of acoustics, product research, product design and development, project management, and audio/video recording engineering and production. His areas of specialisation included professional and consumer audio products and applications, telecommunications and the hearing-health industry.

Robert took great pride in staying active in a number of professional organisations within the audio and hearing industries. He was a Fellow and Past President of the International Audio Engineering Society, where he received the Publications Award in 1977, the Board of Governors Award in 1990 and the Bronze Medal in 2013.

At the time of his death he was serving as a Vice-Chair of the AES Technical Council, and as Chair of the AES Technical Committee on Hearing and Hearing Loss Prevention. He was proud of his implementation of the Richard C. Heyser Memorial Lecture series, which was established in 1999 and remains active to this day. He was a member the American Auditory Society, as well as the American National Standards Institute working group on hearing-aid measurements.

Many may also have been aware of his passion project, ImmersAV Technology – a patent pending audio technology and high-definition video process to create “you-are-there” musical experiences. He finally was able to achieve his dream of becoming a music producer, having the opportunity to work on recording projects with many talented musicians of Chicago.

Robert was a loving son, husband, father, brother, uncle and grandfather. He was very proud of his girl’s accomplishments and he enjoyed being a mentor and teacher to his grandson, Max, to his two nephews, Robert and Michael, and to many others.

Never taking a day off from his engineering efforts, Robert worked up until his decision to enter hospice care at his home. He passed away peacefully on New Year’s Day.

There will be no formal service at this time, but a celebration of his life will be held for him at a later date.

Donations in his name may be sent to the North Shore Foundation Kellogg Cancer Centre:
https://foundation.northshore.org/donate