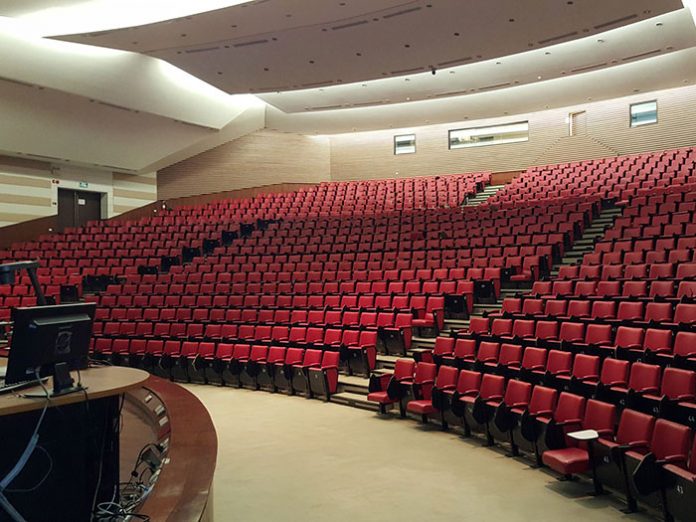 As one of Thailand’s oldest institutions of higher learning, Bangkok’s Thammasat University has long inspired its staff and students to honor the school motto and ‘be the finest’.

But such lofty ambitions can be hard to meet when technology fails to live up to expectations. Such was the case until recently within the university’s multipurpose lecture theatre, where a six year old line array was struggling to make itself heard. Now the problem is solved courtesy of an innovative Renkus-Heinz solution.

Founded in 1934, Thammasat boasts a rich history intertwined with that of Thailand itself, having produced the majority of Thai political leaders. Hence it was imperative to achieve clarity of reproduction within the lecture theatre, which is located within the university’s largest campus, Rangsit.

The venue measures more 6,000 square feet, with a sloped seating configuration that rises from the stage to the rear of the auditorium. Yet a previously installed system, completed in 2010, had failed to adequately serve the space. Unfortunately thought, the existing loudspeaker system had problems with speech clarity. There were uneven sound pressure levels and coverage problems.

Called upon to propose a solution, the installation team turned to Renkus-Heinz Iconyx, with two IC16-RN columns mounted at either side of the lecture theater’s stage – not replacing the existing line array, but augmenting it.

Renkus-Heinz Application Engineer, K.K. Tan added the following: “The primary purpose of the IC16-RN columns was for the all-important speech intelligibility during lectures, while the existing line array would be used for music playback, but even with the additional loudspeakers, the venue was hard to tame, particularly when it came to the rear seating.

“There simply wasn’t enough SPL in the room for a hall of this size when we used traditional multi-beam coverage, so instead we decided to try our new UniBeam format.”

Drawing on Renkus-Heinz’s beam-steering expertise, RHAON software was used to set the IC16-RN to UniBeam (Universal Beam) mode – a cutting-edge feature of Iconyx Gen5. Unibeam counters the limitations of traditional point source enclosures, in which optimal coverage is achieved with a trade-off between distance and accuracy. In contrast, UniBeam makes it possible to deliver Half Horn coverage, with digital beam steering allowing the user to shape their ideal coverage pattern.

Within the Thammasat lecture theatre, the results were dramatic as K.K explained: “we achieved an additional 6dB. The additional power of UniBeam meant that for the first time coverage was achieved across the entire area. Most importantly, it’s a solution built to last.

Using UniBeam means that there’s no undue stress on the system, while the lecture theatre now benefits from consistent and clear speech; from the front to the back of the hall.