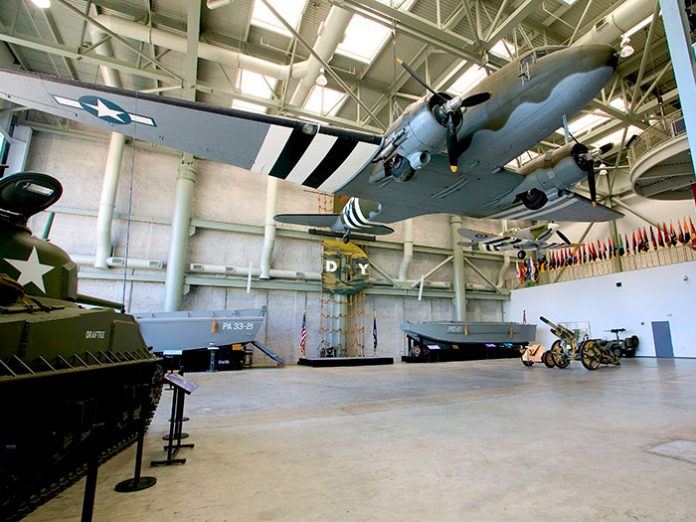 The National WWII Museum tells the story of the American Experience in ‘the war that changed the world’ – why it was fought, how it was won and what it means today – so that generations will understand the price of freedom and be inspired by what they learn.

Those words epitomise the tour that awaits visitors to the historic site in New Orleans, and serve as an AV journey guide. Indeed, we’re entering a new dimension of sound and sight.

The museum’s multiple AV projects have evolved over several phases, with more in the works, thanks to a $370 million capital expansion that will quadruple the size of the original facility.
A key attraction is the 250-seat Solomon Victory Theater, home of the 4D cinematic experience, Beyond All Boundaries, which literally moves and shakes the audience. The theatre is equipped with a 120-foot-wide perforated curved projection screen and left/centre/right audio courtesy of six PNX151T loudspeakers.

Multiple consultants and integrators have been involved in the project. Rob Pourciau, Director of Artistic Engineering/Audiovisual at JBA Consulting Engineers in New Orleans commented: “We spent more than 24 months on designing the Solomon Victory Theater. I believe we had 36 discrete channels of audio. We were very mindful of the cinematic application because we had 4D where objects were flying in-and-out within the space. We needed to place speakers within very unique spaces to get very specific coverage for the audience. Renkus-Heinz provided a wonderful solution.”

Nine PNX82 loudspeakers provide front fill to the first three rows, while four DRS18-2B subwoofers add the essential impact to accompany the experience. Although the subs were not put in a typical location, due to structural limitations, they were placed directly above the catwalk. The subs were then placed to couple with each other, so the sound energy was directed right down on the patrons.

Another popular spot in the museum is the U.S. Freedom Pavilion/Boeing Center, a multipurpose exhibit space. Three diagonal screens cover the walls, with more than a dozen vintage planes suspended overhead. Five Iconyx IC16 arrays and 13 CF61 point-source systems enable the system to be easily reconfigured based on the exhibit in the space.

Rob stated that the whole idea of a museum of this scale is to have spaces that are constantly changing, with new exhibits coming in. So Rob and his team needed a very flexible audio system with a lot of control that could be reconfigured for a multitude of uses.

Elsewhere in the museum, the Stage Door Canteen is a classic 250-seat, 1940s-era venue offering evening and matinee performances of headline acts, signature musical productions, big bands and dancing. The space pays fantastic homage to life in the war and has a main floor and a balcony with seating. It can be used as a restaurant with live entertainment. There’s a proscenium stage like a small theatre. The space is outfitted with left and right arrays of three TRX121 loudspeakers each, along with six SGX41 boxes for front fills. A pair of BGS15 subwoofers provides low frequency coverage.

Renkus-Heinz looms large in other areas of the museum as well, including a pair of Iconyx IC16 steered arrays in the atrium of the Louisiana Memorial Pavilion, a challenging space that supports large events and banquets, including multi-media and live entertainment.

The museum offers a wide range of other exhibits and spaces – with continued expansion over the coming decade, the National WWII Museum’s future looks bright, and Renkus-Heinz will continue to be a part of it.