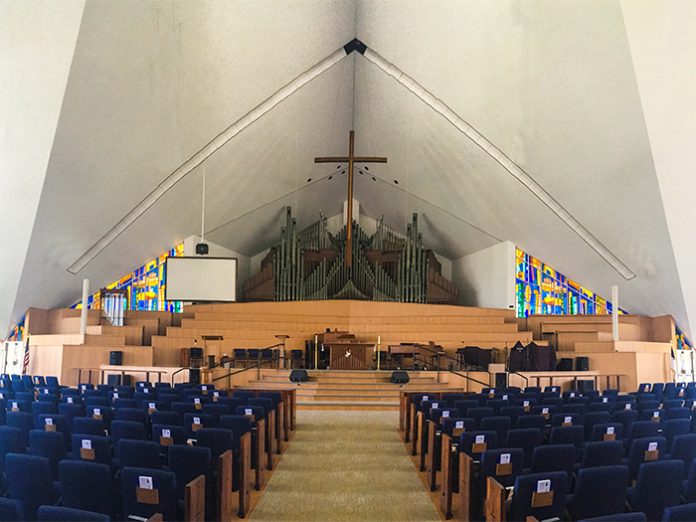 Built in the late 1960s, Pasadena Community Church’s multifaceted sanctuary presents numerous acoustical challenges. The room’s unusual shape offers multiple reflective surfaces at assorted angles, plenty of concrete and glass, and a ceiling that peaks at about 75 feet above the floor. A recent renovation included reducing the seating from approximately 1,100 to about 800, updating the wooden flooring, and more, further altering the acoustics. Most of the seating area is in an expanded fan shape. Spoken word intelligibility and clarity for musical performances proved significant issues with which the church’s out-dated sound system couldn’t cope.

Chris explained: “It’s an oddly shaped space; all those angles you see from outside are there on the inside. When sound hits those surfaces, they throw the sound back at an angle down into the room. It’s a tough room. Once I saw the inside, Renkus-Heinz IC Live steerable arrays immediately became the front-runner. I can’t see anything else getting the job done.”

He chose a pair of Renkus-Heinz IC Live ICL-F-DUAL-RN arrays, taking advantage of the Iconyx digital beam steering technology to put the sound on the audience and away from the room’s complex reflective surfaces. The ICL-F-DUAL-RN can deliver up to eight separate beams, with software-definable opening angles and aiming, so Chris could direct the sound with great precision. Output is flat from 80 Hz to 20 kHz, and the integrated Class D amplifiers provide more than enough muscle to easily support the Pasadena Community Church’s praise band. “I have the ICL-F-DUAL-RNs running about 20 dB down from zero,” Chris noted. The speaker locations are white, so the slender, low profile white ICL-F-DUAL-RN enclosures blend in without requiring custom paintwork.

To manage the Renkus-Heinz arrays, Chris installed a Symetrix Jupiter 8 DSP. “We were told to piggyback on the old wiring,” he recounts, “and we didn’t need Dante for this system. The Symetrix Jupiter 8 is a good, effective processor with analogue outputs. We ran fresh wiring from there to the speaker locations, and we equipped each speaker with an RDL TX-AT1S isolation transformer. We also put in a couple of SurgeX FlatPack SA-82 surge protectors. The church already had a Behringer X32 digital console and Shure ULX-series wireless mics.”