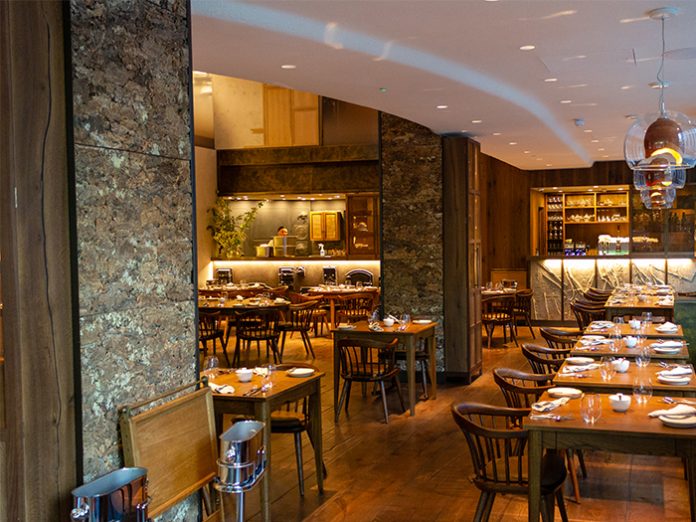 The three floors are linked visually by a spectacular pressed-oak spiral staircase, and audibly by background music, routed by BSS Soundweb, delivered by an array of JBL cutting-edge ceiling speakers and processed in Crown’s advanced multi-channel DCi network amplifiers. Two amp racks are connected via BSS’ proprietary BLU-Link, with all channels fully assigned.

Working to a design conceived by Tatiana and Hedonism’s Evgeny Chichvarkin, along with These White Walls studio and Lustedgreen architects, Penguin’s Director of Operations, Dylan Thompson has not only equipped the two main restaurants and basement Bar with JBL but also five private dining rooms, corridors, toilets and other service areas.

Located in the subterranean vaults, three private booths known as The Broken Room, The Shadow Room and The Reading Room, contain two JBL AC15 and Control 50S subs, which are concealed behind machined grilles and hidden in walls. Wall modules allow connection of customers’ third-party devices via Bluetooth or line-in.

Powering the final three zones on the Mezzanine is a second amp rack comprising two more DCi 8|300N network amplifiers and 2|600N. While the latter runs the subs in the private dining room the 8|300N’s power the auxiliary speakers. Finally, in the toilets and service areas Penguin have specified JBL 16C/T ceiling speakers.

“There was a fairly basic consultant spec which we adapted, “ said Dylan Thompson from Penguin. “The key was for the speakers to be heard but not seen, so surface-mount was not an option.”

Soundweb served largely as a matrix router, with 24 ins and 34 outs and different level control presets stored for the different trading hours. “A bonus was that we were able to do all processing in the Crown amplifiers so we could not only save money but also rack space.”

Such has been Penguin’s attention to detail that all speakers have been RAL matched in different whites and bronze/brass hues. They have also offered 3.5” jack plug-in points and cabled the stupendous cellar for future expansion.

Dylan concluded: “All the trades were brilliant to work with. Once the Apps Team at Sound Technology Ltd had demonstrated the ceiling speakers as the best solution everything else fell into place.”