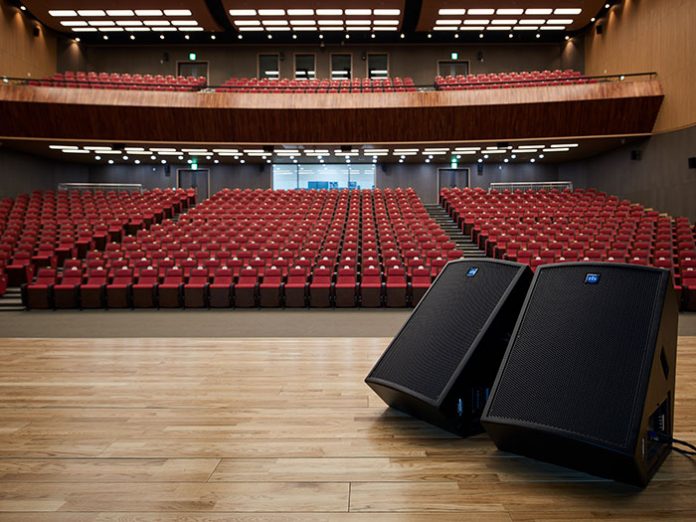 It’s rare that a project is so essential that even its identity has to be protected. Yet near to Gyeongju, Gueongsang province in South Korea, the recently opened headquarters of one of Asia’s largest power companies is so important that its name can’t even be printed. Yet even the largest projects can run into familiar challenges, and like thousands of less secretive installations, when this facility encountered acoustic problems, it turned to a name it already knew – Renkus-Heinz.

Opened at the beginning of 2016, the headquarters includes a large auditorium, a number of conferencing rooms and even an outdoors sports arena. Each is equipped with its own Renkus-Heinz system, supplied by local distributor DK Vascom. But the decision to choose Renkus-Heinz was thanks to another problem-busting project.

DK Vascom’s Patrick Han explained further: “Some time ago, the company had a problem with the pubic address system within its employee apartments. They couldn’t solve the problem, but a company named Sein Co Ltd – our local partner in Gyeongsang province – looked at the issue and fixed it immediately. Since then the supervisors have recommended Sein and Renkus-Heinz to everyone.”

The relationship led to Sein being brought into the construction of the new headquarters, with the company’s owner, Munbum Kim, taking a personal interest in the design of the high-profile project. Working with him was Project Manager Jinwoo Park, while Chansun Choi from DK Vascom offered support throughout the construction. Towards the end of 2015, the team addressed the unique challenges of the project, perhaps the most dramatic of which was a reduced schedule that required all work to be completed over the Christmas and New Year period.

Patrick recalled the demanding installation: “We were scheduled to undertake the installation and tuning after the interiors and electrics were completed, but it was decided that the project had to be completed much sooner than originally planned. So we supplied all of the equipment at the beginning of December and the installation was completed by December 14th, with tuning due to take place on the 22nd and 23rd, just before Christmas. Then we discovered an acoustic blind spot.”

The auditorium’s balcony was unusually high, meaning the first four rows of second-tier seating were not covered. It was the kind of problem that could have set back many projects with such tight timeframes, yet through the use of RHAON software, only four hours were required to reconfigure and recalibrate the Renkus-Heinz solution.

Elsewhere in the complex, the facility’s four conferencing rooms also benefit from the same high fidelity. Three are served with pairs of TRX82 enclosures, but a high ceiling within the largest of the four caused reverberation issues. DK Vascom and Sein have once again demonstrated a unique solution in the shape of IC8 digitally steerable Iconyx columns.

Finally, the facility’s outdoor sports arena offered another opportunity to impress, when an unexpected rainstorm proved the water-resistant credentials of the two TRX 81/9W and four TRX121/9 enclosures that serve the area.

Patrick concluded that on the date of January 4th a New Year kick-off meeting took place with the company’s president, management and all of the employees, which ended in triumph as everyone was incredibly delighted with the performance of the system.