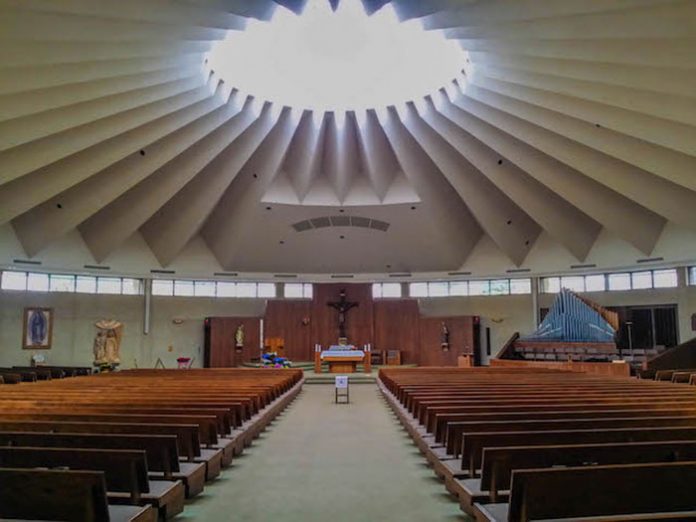 Founded in 1946, St. Bridget Catholic Church dedicated its current building in 1988. The 1,000-seat sanctuary’s original sound system, installed behind panels above the altar area, failed to address the hall’s acoustical challenges. With a new installation of Renkus-Heinz’s Iconyx system, the church has overcome its past sound issues.

“The room is about 124 ft in diameter, with a high ceiling and windows around the perimeter,” explained Jon McDowell, Owner of Rockford, IL-based systems integrator Jonny B Enterprises. “The views are lovely but reflections were a critical issue. Ceiling reflections are not as bad as you might expect but the windows are incredibly reflective. Also, there were acoustic dead spots in the room. The old system was hidden behind panels, which was like trying to fire sound through a tank driver’s window. On top of that, service was a nightmare: You needed 20 feet of scaffolding just to get to the grills and an extension ladder on top of that to get to the speakers. It was time for a change.”

Having seen and heard Renkus-Heinz Iconyx systems at trade shows, Jon anticipated that an Iconyx steerable array would be the best choice for the church. Steerable beams could focus sound on the congregation while keeping it off the hard surfaces, including the windows, thus minimising reflections and other acoustical issues. Jon recommended a system based around left and right Renkus-Heinz Iconyx-series IC24-R-II steerable arrays.

“Gene Williams from Frequency Sales came in with a demo system and set it up,” recalled Jon. “The architect was present as well. Between the demo and what we had learned at the trade shows about using steerable beams to keep sound off the reflective surfaces and on the congregation, we quickly realssed that a pair of IC24-R-IIs, with one column on each side of the altar, was the right choice. The system was tuned with Renkus-Heinz RHAON II system management software, and it all went perfectly.”

The parishioners are very pleased with their new Iconyx system. “I have gotten no negative feedback and a lot of positive comments,” said Jon. “Several people told us, ‘that’s the first time I’ve been able to hear everything.’ We also got comments like ‘I didn’t even see the speakers until you pointed them out,’ and ‘It’s just those two columns?’ I’m so happy with Iconyx that I got Renkus-Heinz to qualify me on the product for future installs. I thank Renkus-Heinz for great service and for a great product that solved acoustic issues in a difficult room.”