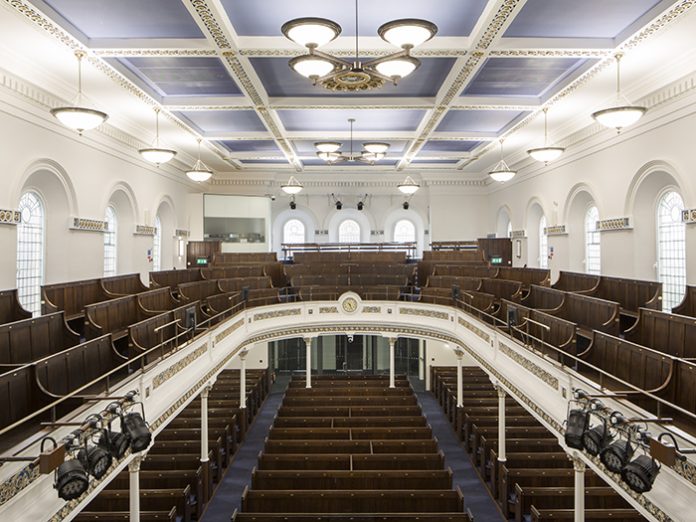 From Wesleyan Chapel to Synagogue and now University Hall, Grade II listed 48 Shakespeare Street in Nottingham has enjoyed a rich history since its construction in 1854 to designs by Thomas Stimpson. The building was acquired by Nottingham Trent University (NTU) in 2016 and has since been the subject of sensitive refurbishment works aimed at creating a facility suitable for ceremonial occasions including graduation days. The hall will also offer a multi-functional space suitable for a variety of internal and external lectures, talks and small-scale music performances. A new foyer has been created and the former chapel has been opened up by the use of glass to replace solid screens. A newly created glass vestibule at the back of the hall will act as a lobby, whilst the large rear extension added in 1976 have been developed to provide a Music Centre and dance studios.

NTU required a system to provide sound reinforcement, signal processing and lecture capture for the main ceremonial hall, as well as further audio provision for the ancillary spaces. The listed status of the main hall demanded that all works be undertaken with great sensitivity towards the Victorian interior. NTU’s AV Team Leader Stuart Loughran asked POLAR to design a system to meet its requirements and Roche Audio Visual was appointed to install the systems. The main ceremonial hall is divided between a ground floor and a surrounding first floor mezzanine. The nature of the architecture conspires to produce a highly reverberant space, complicated by low-ceilinged areas beneath the mezzanine. Flexible wireless microphone systems were required to cater for a wide range of uses in both the hall and the music centre.

Having worked with POLAR on previous schemes, Stuart Loughran and his team were familiar with the Renkus Heinz ICONYX range of beam steerable loudspeakers and Mark Bromfield of POLAR was in agreement that these sophisticated, compact, powerful and discreet units would be an ideal fit. Each ICONYX module controls its own built-in digital processor and amplifier, that enables tailored performance for venue and audience in a way that could not be achieved using conventional technology. The ICONYX speaker places sound only where it is required, avoiding reflective surfaces that create problems. Not only does the ICONYX range deliver exceptional performance in challenging spaces where intelligibility is problematical but its profile also blends seamlessly into the background, giving it another huge advantage in heritage spaces that are being used for contemporary applications.

Two Biamp TesiraFORTE DAN CI digital audio servers with 12 analogue inputs, eight analogue outputs and Dante digital audio networking, were installed to control all audio processing, including signal routing, mixing, filtering, EQ and delay. POLAR’s design specified a beyerdynamic TG1000 digital wireless system. This extremely flexible 24-bit system covers an impressive 319MHz of the UHF bandwidth and combines a wealth of user-friendly features designed to enhance performance. In the ceremonial hall, six beyerdynamic TG1,000 DR dual receivers with Dante interface were seamlessly integrated into the network. A combination of seven beltpack transmitters for use with TG H57C earhook microphones, four handheld transmitters with TG V50w capsules and two beyerdynamic Classis GM 315 gooseneck microphones cover the broad requirements of the venue. In a setting such as this, where performers or presenters are out of necessity in front of the the PA loudspeakers, when compared to a lavalier, the H57C earhook microphones enable more gain, due to the proximity of the capsule to the mouth.

In the Music Centre extension, a different Renkus Heinz system was specified, this time based on two CFX121, two CFX81 (delays) driven by one MC2 T1500 and one MC2 T1000 amplifiers and two x self-powered CF12S 5R. The Renkus Heinz CF/CFX Series is a compact, high performance main PA, ideal for music and speech reinforcement in a multi-use space such as this. A further two Biamp Tesira FORTE DAN C1 servers were put in place along with a Dante compatible Mackie DL32R mixing console, controlled wirelessly using the Master Fader iPad app. Another TG1000 beyerdynamic wireless system was installed in the space, comprising in this instance six TG1000 DR dual receivers, six TG1000 beltpack transmitters and six H57C earhook microphones.

The final part of the installation saw the Dance Studio equipped with a pair of Renkus Heinz CFX 121 speakers driven by one MC2 T1500 amplifier. A beyerdynamic TG 534 Headworn microphone set was the perfect choice of wireless microphone for the needs of this single-use space. Stuart Loughran, audiovisual and Media Services Team Leader at NTU was very pleased with the outcome, “Our principal aim was to enhance the graduation ceremony experience by providing an audiovisual solution that could be streamed to other venues in the university, as well as to our dedicated YouTube channel. The beyerdynamic gooseneck microphones assist the Vice Chancellor, Registrar and other dignitaries addressing the guests and graduands, whilst the beltpack and handheld mics act as back up or for use in other events. The Renkus Heinz Iconyx loudspeakers were an easy choice to make – we’ve had a lot of experience with them and they provide excellent coverage to a large area of the hall. The Cornered Audio C5TRMs provide the necessary infill for further into the room, managed by a couple of Biamp Tesira Forte DSPs in the control room.

“The audio within the hall across both floors is crystal clear and provides the right amount of voice reinforcement required to make ceremonies enjoyable from a practical and technical point of view. The system inputs in a very straightforward way to our broadcast system and we’ve already received an excellent response from people all over the world who have been unable to attend ceremonies and have instead enjoyed our YouTube transmissions. The support we received from POLAR has once again been exemplary, from the pre-sales meetings with Stuart, Will and Mark through to the configuration of the equipment with the POLAR engineers.”

The installation at 48 Shakespeare Street was expertly handled by Roche Audio Visual throughout and Darren Stratford and Jason Spooner of POLAR Integrated Solutions commissioned the systems. Mark Bromfield, Business Development Manager at POLAR commented: “NTU and Roche have successfully rolled out a number of schemes using Renkus Heinz loudspeakers, so there was a pre-existing appreciation of just how effectively the Iconyx can handle potentially difficult spaces. The main challenge at 48 Shakespeare Street was the fact that it was on two levels. Very careful consideration had to be given to the speaker placements, not only in terms of achieving the highest standard of intelligibility but also to meet the aesthetic needs of the heritage architecture. The project team has succeeded in both respects, creating a visually discreet system that delivers exceptional audio.”