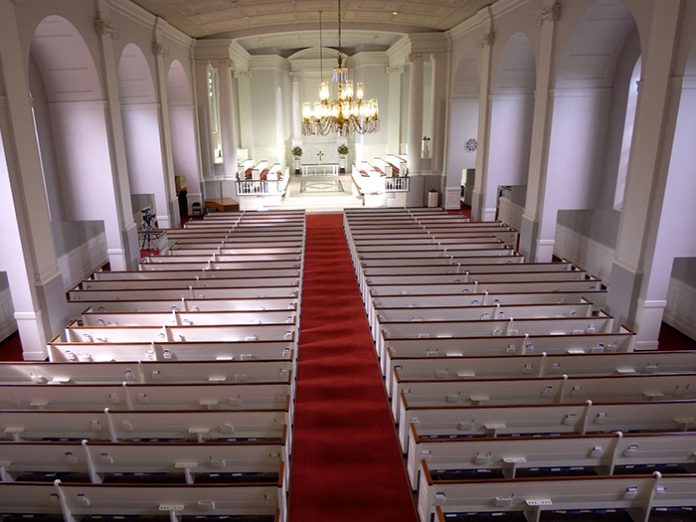 First Presbyterian Church was born when now-mighty Houston was a dusty, two-year-old town in the Texas Republic, so it is fair to say the city and the church grew up together. Today’s First Presbyterian resides on a sizeable campus of a dozen buildings in Houston’s Museum District. Unfortunately, the acoustics of the church’s main sanctuary turned the spoken word into an unintelligible mess, so First Presbyterian turned to acoustician Wade Worley of Worley Acoustics, who turned to Renkus-Heinz ICONYX digitally steerable arrays.

Wade described the acoustics of the main sanctuary in classic terms: “Here we have a shoebox room, widely acclaimed as a great organ room. They have a very nice pipe organ, and a lot of Houston-based organists love to come and play in this room because it’s got such a long reverberation time, especially in the low frequencies.”
Sadly, what is good for the organist is not so good for intelligibility, especially in the back of the room. “They were using pew-back speakers that had fallen into poor maintenance,” Wade recounted. Rory James, First Presbyterian’s Media Coordinator, saw the problem up close. “Some of the pew-back speakers worked, some didn’t,” he detailed. “Some sounded different than others.”

Without reliable local coverage for worshippers, the church was playing to its weakest suit, acoustically. “They were just using a pair of point-source speakers up front to cover the entire room,” recalled Wade. “With the reverberation, that just wasn’t working well at all. It always felt like we were trying to force this room that was designed for one application to do something completely different,” described James, “and the room was just kicking back against us constantly.”

Clearly, intelligibility had to be improved, but not at the cost of destroying the beauty of the building’s construction. “In wonderful traditional rooms like this, with long reverberation times, you really don’t want to ruin the acoustics for traditional worship,” Wade counselled. “You need a product like the Renkus-Heinz ICONYX that’s going to give you a very tight beam of sound down to the listeners and keep the sound off the walls and the ceiling. That’s the way that we improve speech intelligibility.”

In fact, this is precisely the kind of challenge the ICONYX series loudspeakers were designed to meet. In ICONYX speakers, multichannel audiophile amplifiers power arrays of purpose-designed coaxial transducers, each with its own triple-tweeter high-frequency array. This triple-tweeter “array within an array” design reduces the distance between high frequency sources for greatly improved performance, with consistent, broad horizontal dispersion. Multiple beams can be independently aimed and contoured using software-controlled DSP.

“The room really took to the product, and the product was perfect for the room,” observed manufacturer representative Native Media Sales president/CEO Michael Austin. “The Renkus-Heinz ICONYX really solved the issues they were having with intelligibility in this space, While taking a minimal footprint.” James agreed, adding: “The ICONYX has made listening and mixing in this room a whole lot easier.”

Jay Bole of Hi Fi Doc, AV integrator on the project, appreciated the manufacturer’s direct involvement in making everything work. “Renkus-Heinz, as a company, is very good to work with, from the president all the way to the shipping clerk. One of the things that we, as an integrator, are very keen on is support from the manufacturer. Renkus-Heinz ranks right up at the top.”

Wade had the last and most important word: “The Renkus-Heinz product has been well accepted, after being seen and heard in the room. The church is very happy with the results.”