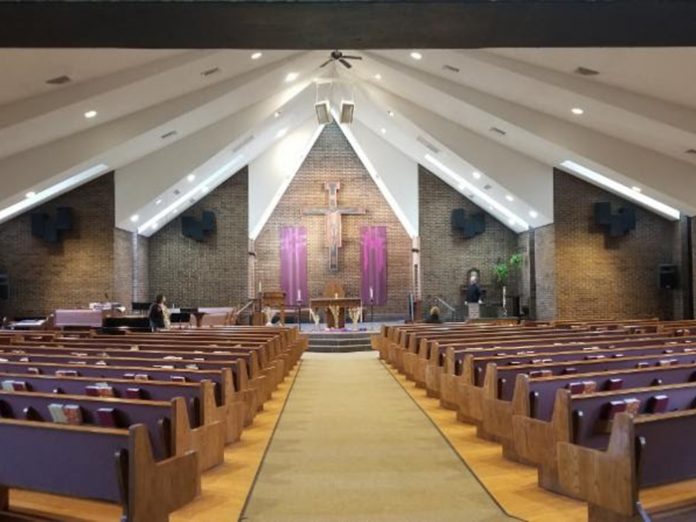 St. Augustine Catholic Church sits in the diocese of Richmond, in North Chesterfield, a suburb just south of Virginia’s capital city. The church’s sound system had been expanded as attendance grew but not in a particularly methodical fashion. Deciding it was time to rectify the situation, the church’s Rev. Wayne Ball, known affectionately as “Father Wayne,” made the same call he’d made several times over the previous 20 years in his positions at other churches when they needed audio services: to Dave Cooke, owner of DC Engineering. When Dave arrived, he knew his work was cut out for him. “It was somewhat of a mess that had been patched and added to and reworked for years, and it sounded like somebody holding their nose and speaking into a tin can,” he reported.
The main sanctuary has a capacity of around 250 seats, and the church holds two services on Sundays: a traditional one, which tends to be fairly lightly attended, and a Hispanic mass with amplified music, which always draws a huge crowd. “They pack the place for the Hispanic service,” reported Dave. “People are literally out the doors and into the lobby, where the overflow speakers are, and sometimes into the fellowship area.” When the church started doing more amplified music for the Hispanic mass, it had added a pair of “rock ‘n’ roll” speakers and a powered mixer, which was cascaded with the original mixer in the system. “With all the cascaded mixers and patching things around in circles, it was chaos,” Dave said.
Dave determined that the room would be better covered by point-source loudspeakers than a line array, so he designed and installed a small but potent system of point-source loudspeakers from Renkus-Heinz. The existing centre cluster was replaced by two Renkus-Heinz CX121 two-way complex conic loudspeaker systems, painted white and mounted 24 feet off the floor. Two more CX121 cabinets, painted black, were mounted on the walls, about 18 feet off the floor, putting them in the same vertical plane as the centre speakers, ensuring a consistent enough time signature that time alignment wasn’t required. “There’s an array of dedicated organ speakers on each wall, so we arrayed the CX121s to match the upward sweep of the organ speakers,” Dave noted.
The CX121 pairs a 12-inch, heavy-duty woofer with a 2-inch titanium HF driver loaded by one of Renkus-Heinz’s Complex Conic Horns, which exhibit a 90-degree by 40-degree coverage pattern that provides constant directivity without the problems of conventional rectangular horns, and can be rotated 90 degrees within the cabinet for wide or deep listening spaces. “The CX121s are just superb sounding, and those Complex Conic horns are amazing. They really are smooth,” marvelled Dave.
Dave wanted to improve the sound of the system while avoiding increasing its footprint or making it more intrusive than the previous system, and the CX121 fulfilled both criteria. “The CX121s were powerful enough and had the frequency response we needed,” he affirmed. “They were also about the right physical size to be a very close match to the speakers that they replaced.” Dave ensured that the praise band could make a sufficiently joyful noise on the low end by installing a pair of CX112S subwoofers, which use a single, high-performance 12-inch driver to supply frequencies down to 40 Hz. “They’re not putting on a rock concert but having some low end is a good idea,” Dave pointed out. “The CX112S subwoofers fill in the low end really nicely.”
In addition to the sanctuary, St. Augustine has a 300- to 400-square-foot chapel that is used as a cry room. Here, Dave installed a pair of CX41 compact four-inch coaxial two-way loudspeakers, driven as a 70-volt system. Equipped with a single four-inch extended-range coaxial loudspeaker, the CX41 is capable of producing from 100 Hz to 20 kHz (±3 dB) and translates up to 50W of program power into peaks up to 115 dB SPL. “It just made sense. The CX41s are fabulous little things,” stated Dave.
The previous system had employed passive loudspeakers, so speaker wire runs, but not power connections, were in place. Cooke decided to stay with passive loudspeakers and analogue connections, so he added two Crown amplifiers to the existing pair of QSC amplifiers. The cascaded mixers were replaced by a Roland M200i 32-channel live digital mixing console. A ProCo 8×4 snake was run from the console to about 15 feet behind the organ console, where the choir is, and Father Wayne received a new Countryman B2D directional lavalier microphone.
Dave thoroughly modernised the core of the system. For routing and processing, Cooke installed a Lectronsonics Aspen SPN812 digital signal processor. An Audioengine B1 Bluetooth receiver added an easy connection from smartphones, and an iPad was supplied for the M-200i console. A Wi-Fi router enables mixing from the iPad anywhere in the building.
Dave had confidence the Renkus-Heinz loudspeakers would serve Father Wayne and the congregation well. “In the realm of PA speakers, either point source or digitally steered, Renkus-Heinz is my go-to,” he proclaimed. “I love the quality of their stuff; they just make good products.” Getting the job done on time was not an easy proposition. “It was a very intense installation,” Dave recounted,” because, with churches, I always try and make sure they’re up and running for Sunday, even if the install is not quite finished and we have to do a temporary system. This was a one-week install, so we started early Monday and finished it on Friday. We worked our butts off.”
The effort proved more than worthwhile. “The coverage and sound quality are night-and-day different,” affirmed Dave. “Father Wayne and the congregation loved it. As soon as we started bringing the system up, people started coming out of the woodwork to hear it.”
renkus-heinz.com
dc-engineering.biz