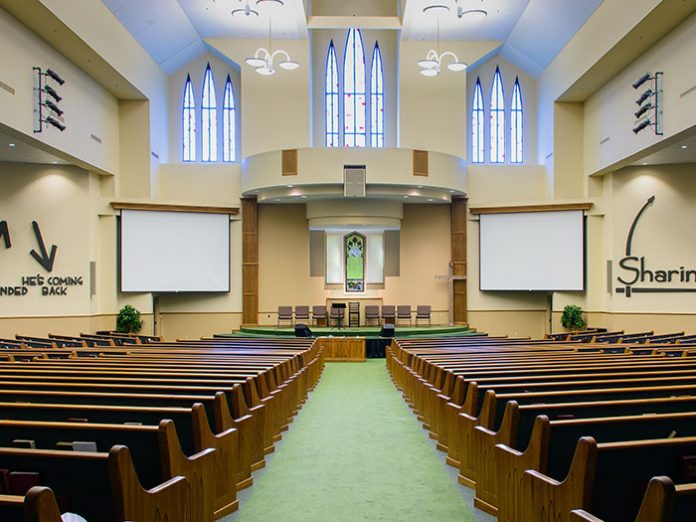 Sunday services at East Sunshine Christian Church are all about singing along. The church’s contemporary worship style is based around four part acapella harmonies, led by the group onstage and accompanied by anyone in the congregation who cares to join in.

East Sunshine’s 1500-seat sanctuary is big, bright and welcoming, and Sunday services are well attended, but the church had struggled for some time with an inefficient sound system. As Worship Minister Randy Wray explained: “Poor sound and inconsistent coverage had an impact on the congregation. We rely on people in the congregation being able to hear their part. When it’s muddled and there’s no distinction, it’s very hard to sing and appreciate the four-part harmony.”

That all changed thanks to a major renovation of the sanctuary, including a new sound system featuring Renkus-Heinz ICONYX Gen5 digitally steered array loudspeakers, designed and installed by Sensory Integration AV of Springfield, Missouri.

Sensory President, Darren Smith commented how the room presented some interesting challenges: “It’s a very wide room, with a 60-foot peak in the middle and a very large rear wall. The previous system really didn’t provide the vocal intelligibility they needed, and coverage was very inconsistent. We’ve actually done multiple demos of different line arrays in this room, and could never really achieve the coverage we needed.”

Randy agreed and stated that the best way to describe the old system was ‘muffled’ and that there was really no intelligibility. Where the audience were seated was also taken into consideration; some people complained they couldn’t hear, and others said it was too loud.

Sensory Integration’s solution was to create a left-centre-right system using a pair of IC Live ICL-FR-N columns to the left and right of the stage and a dual IC2 array with two IC2-FR systems in the centre, cut into the top of the proscenium. The Iconyx beam steering gave Randy and his team the ability to steer the sound away from the back walls, dramatically reducing reflections and increasing intelligibility. The L-C-R configuration also gave us excellent, consistent coverage. It allows great sound anywhere in the auditorium.

Randy Wray concluded with the following: “With the previous system, we could actually get away with weaker singers onstage. As soon as I heard the new system, my first thought was that we need to get better onstage, because people are going to hear everything.”