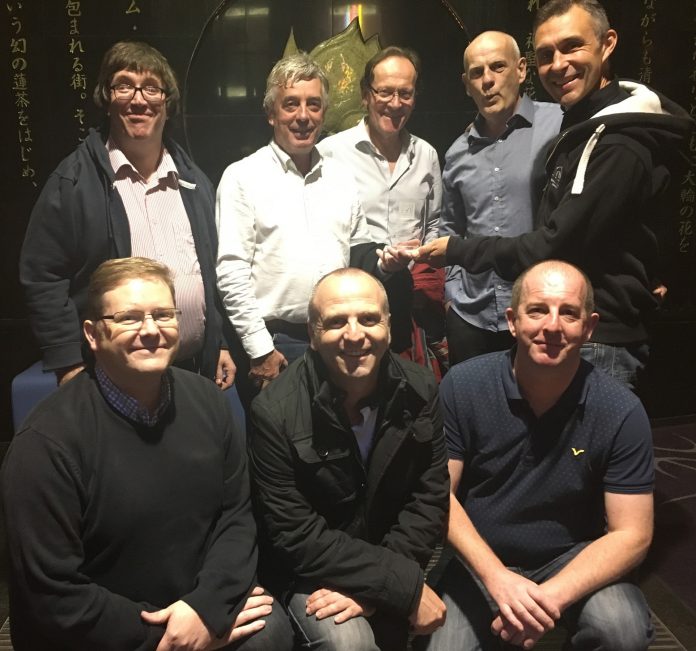 Back in 1982, Martin Rea and Sean Gallagher of Rea Sound visited Messe Musik in Frankfurt with the intention of securing an audio dealership in Ireland.

They had a number of brands in mind, and had already arranged several key appointments. While there, however, they happened to walk onto the Martin Audio stand and were immediately impressed with the product and philosophy behind it from Dave Martin. It was also the first time they met with the company’s charismatic founder. A deal was done and the first system was bought and shipped to Ireland.

Thirty-five years later the relationship continues to flourish, and this month Martin Audio presented their long-serving Irish based partners with a plaque to commemorate this milestone.

Working with Dave Martin was always colourful, recalls Sean, “On one memorable phone call to Dave, we spoke with him on why we thought his new speakers might not sound right. He listened to all the concerns that we had and asked which desk we were using. Upon hearing the answer, he said, ‘Great, this is what you need to do: head outside with a spade, dig a large hole and stick the desk into the hole and bury it’. It was one of the funniest technical support calls we ever had!” Over the 35 years Rea Sound has worked on many special projects with Martin Audio solutions. “Some stand out,” admits Sean, “including Cork Opera House, which springs to mind as being one of those dream enquiries.

“During a trip to the Martin Audio stand at the PLASA Show in 2004, a gentleman from Cork approached and said they were interested in a new PA for the theatre. Within three weeks of this discussion a new W8LM system for the main house system, Blackline infills, Cinema system, monitor system plus amps and control had all been designed, installed and commissioned. Thanks to the close relationship with Martin Audio we were able to turn around the project quickly and professionally to the client’s request all from a simple chat.”

There have been other memorable projects including a current project to fit out the church of the world famous author CS Lewis, or previous work like the church located beside the Dark Hedges in Game of Thrones and supplying the PA for the President of United States during his visits to Ireland.

Rea Sound has also been fortunate enough to supply some of the hardest working hire companies in the industry. The most recent large-scale sale was to PHG in Belfast with the purchase of the MLA system. “Certainly, it was the largest sale in Ireland with Martin Audio, coming in our 35th year of partnership,” stated Sean.

Why has the relationship between the two companies been so enduring? Sean says that the partnership forged between Dave Martin, Martin Rea and himself at the inception set a strong foundation which has been maintained. “The product quality and range have grown year on year and we have certainly seen in recent years some great ranges covering all sectors of the industry.” However, as with all relationships, it’s the people that help to sustain it, he acknowledges, pointing to the memorable nights out in London during the PLASA Show. “Meeting with the team and their other distributors was always a great way to build those relationships,” he continues.

“Over the years we have worked with some great people in Martin Audio. As time goes by people change as they move on or retire and new relationships are built. But it is great to stay in touch with these guys even after they move on. The entire team from dispatch, marketing, sales support, R&D and technical and senior management have always been supportive and available which helps to cement the overall bond.