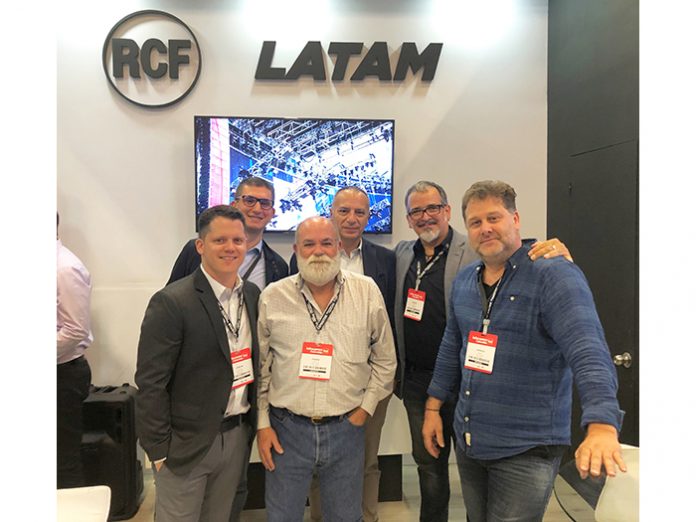 RCF spa has appointed the newly-created RCF LATAM as its distributor for Central America, Colombia and the Caribbean.

The company has strong roots in the professional audio industry, boasting more than 20 years’ experience. Stated RCF LATAM director, Jose M. Gonzalez, “Our company is fully committed to the distribution and positioning of RCF as a leading brand within the designated markets.

“The owners of RCF LATAM have successfully distributed the RCF brand for several years, and their aim is to develop the brand in the weakest markets and support its presence generally in Latin America.”

This was backed up by RCF Export Sales Manager, Luca Agazzi: “We wanted a new company focused 100% on RCF, that comprised experienced audio industry professionals.”

He confirmed the enduring relationship with RCF LATAM’s Frank Peruyera (via Tropical Music and All Music) and Jannios Jiminez (via Italian based Art Music Group). Jose Manuel Gonzalez has also been in the business for many years, he said, representing both RCF (during his time at All Music) and other premium audio brands.

“This move makes the business neater and more systematic,” continued Mr. Agazzi. “Colombia has always been influenced by trade coming from the US, so gathering the business in one company will ensure improved control and stability in the area.”

The new company marked its debut at InfoComm Colombia (October 23-25) in Bogotá, receiving a positive response to the new initiative. Stated Mr. Gonzalez: “We were welcomed with great enthusiasm by RCF’s customers, as they had been waiting for a change in the brand’s distribution in Colombia. Customers are now showing considerable interest in the new lines that have been developed.” These include, in particular, the HDL, HD and NX series as well as the transducers.

Although RCF LATAM’s main office is located in Miami, collaboration with new commercial partners in Colombia will now ensure full availability of inventory.