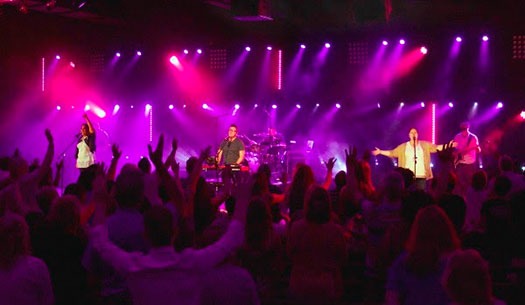 Like many audio system design projects, the biggest challenge in specifying sound for a house of worship is often overcoming the limitations of the physical space. That was the situation that featuring: Wayne, IN-based Custom Sound Designs Group, faced in a recent project for First Assembly Church of Raleigh, NC, and a system based on L-Acoustics’ Kiva and ARCS WiFo product lines controlled by a Yamaha CL5 digital audio console was its solution.

For a millennium or more, worship spaces have traditionally been works of high art in architecture-soaring spaces featuring the finest materials and designs to inspire a sense of awe and wonder. Today, however, especially in the rapidly growing evangelical world, new churches are often likely to be former retail locations or spaces in commercial parks rather than sites purpose-built from the ground up as houses of worship.

A perfect example of this, Raleigh First Assembly acquired a 58,000 sq-ft space that had the advantage of being located right in the middle of its mission zone, but the abandoned industrial property presented challenges as massive as the space.

“This is not just a case of it being a large and acoustically unfriendly space,” explained CSD President, Doug Hood. “In some ways it was closer to a new-construction project than a typical renovation, but the nature of the construction limited what could be done. The site was originally a manufacturing facility, so it was a large and almost completely open environment. Things like support beams are central to the structure and therefore had to be worked around in terms of the design.”

CSD turned to the L-Acoustics Kiva and ARCS WiFo ranges for the loudspeaker end of the equation, deploying a dozen Kiva modules in L-R arrays of six, then extending that coverage to the sides with an ARCS Wide and ARCS Focus paired together on each side for outer fill.

The room is much wider than it is deep-one of the overall design challenges by itself-and so the system deployment is wide enough that a centre fill is needed. CSD took the novel and cost-effective approach of flying a single 115XT HiQ enclosure, typically billed as a stage monitor, in the centre position for its high directivity and SPL, while a total of seven compact 5XT coaxial enclosures are spaced out across the stage lip in recesses as front fills.

In order to completely cover the cavernous space without the volume from the main system overwhelming those sitting close to the stage, four 12XTi modules from L-Acoustics’ architectural line were deployed as delays to cover the back portion of the main worship space.

Low end is filled out with a quartet of SB15m subwoofer modules flown in pairs adjacent to the Kiva arrays and four SB18i subs installed in recesses in the face of the stage. Seven LA4 amplified controllers power the system.

A Yamaha CL5 digital mixing console fed by RIO digital stage boxes drives the L-Acoustics system, and in-ear monitoring relies on a mix of Sennheiser transmitter-receiver packages along with Aviom personal mixers. Using almost all in-ears and only two small wedges virtually eliminates stage volume, which is crucial in this venue.

“One of the reasons we chose the Yamaha CL5 was that we wanted this system to be rider-friendly,” Doug shared. “We knew that the console is widely accepted as a standard of quality so we felt very comfortable with selecting it. Furthermore, we wanted to run a digital snake from the stage to the mix position, so by using the RIO boxes we were able to accomplish that goal. We also wanted seamless integration to the IEM system, and by using Dante we created a great signal flow to the Aviom personal mixers on stage.”

Doug reported that before any audio or staging gear went in, a total of 118 custom acoustic panels made by Golterman and Sabo were installed. “It was a very unfriendly space to start with, but we treated most everything except the ceiling-the side walls and the back wall-and it is all very well behaved now.”

That ceiling was part of the reason that Kiva and ARCS WiFo were chosen. “Raleigh First Assembly brings in national touring acts pretty regularly, so, again, we knew from the start that we needed something rider-friendly and L-Acoustics is a very widely accepted brand,” said Doug. “Also, although the building itself is very large, the ceiling is not super tall, so we needed something that could fill this enormous room with power and clarity and still keep a relatively small footprint. The Kiva and ARCS WiFo combo did that really well.

“From a relationship standpoint, RFA was the perfect client. They put a lot of trust in CSD. Basically they said, ‘Here’s this great big building. What can we do to make it special?’’ The L-Acoustics system was the best choice for them based on rider needs, physical size, sound quality and budget. All of those points had to be hit and this system does it. The end result is a great room that the church is just crazy-happy with.”