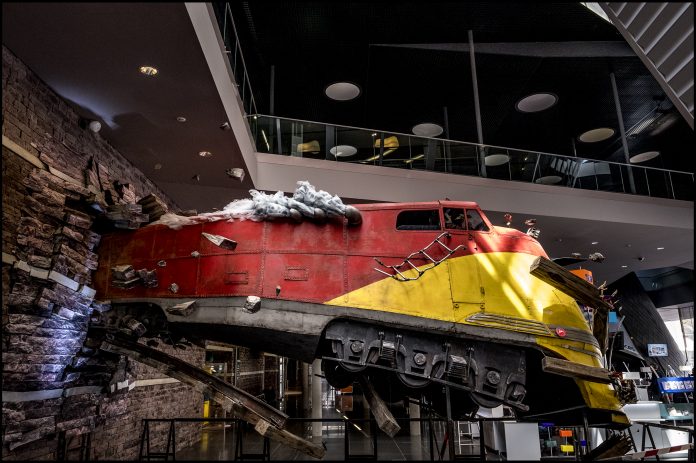 Situated in Rennes, Les Champs Libres is not only the main city library (Rennes Métropole) and Museum of Brittany but it also incorporates a science museum with planetarium, a conference room and exhibition hall. Designed by architect Christian de Portzamparc 11 years ago, this cultural centre recently hosted a highly progressive multipoint sound system installation that would permit six sound designers to ‘sculpt’ artworks that could be moved in space.

At the hub of the system is an ingenious ‘engine’ in which advanced Powersoft tools communicate with QSC Q-Sys integrated AV technology control over an AoIP platform. This enables the designers to play out FLAC files audio samples compressed with the FLAC audio encoding algorithm over AES67 which these devices support.

With eight Amadeus Audio PMX-5 loudspeakers and two ML-12 subwoofers distributed in the exhibition hall, a Q-SYS 110F core along with a pair of Powersoft Ottocanali 4K4 DSP + Dante 8-channel amplifiers and a Luminex GigaCore 12 managed Gigabit Ethernet switch allow the sound creations made by these sound designers, and mixed in 8-track to be played optimally with linear and circulatory spatial features. Two Q-Sys AES67 transmitters send dedicated streams to both 8-channel Powersoft amplifiers via the Luminex GigaCore 12 switch, while the recent AES67 compatibility of QSC’s Q-Lan audio router and Powersoft DSP + DANTE amplifiers not forgetting the Q-Sys plug-ins enable a perfect system integration.

The spatial and sonic ambience in which the amazed visitors find themselves immersed is redolent of trains, particularly fitting since it coincides with the arrival of the LGV (high speed train line) to the city this month bringing Rennes just 1hr 25 from Paris. The brain behind the idea is the facility’s Conference & Exhibition Hall Production Manager, Dewi Seignard. The installation was undertaken by his in-house team, with equipment supplied by local AV system specialists, VIDELIO-IEC to meet the exacting timeframe and technical requirement of this multipoint installation. Created within their busy events cycle (conferences, exhibitions, installations) it was originally intended to be a temporary exhibition. “However it quickly became evident that it would remain for future events,” stated Dewi.

He had been contacted ahead of the project by the venue’s director and asked to come up with a design solution to meet the artistic requirement and Dewi took responsibility from conception to fulfilment in the venue hall, which links to all other areas of the complex. As for the selection of equipment Dewi informs that Powersoft had been recommended by Amadeus Audio’s Gaetan Byk and scientist Michel Deluc as representing the best integrated amplification and processing solution. “Also, there was the possibility offered by the Armonìa suite, as well as its ease of use, which completely convinced me,” he confirmed. “As for Q-Sys, one of the main advantages of this system is that it allows non-experts (with a sufficient IT background) to make a management system with various access levels while the Q-Sys designer interface allows the system architecture to be designed to suit their every need.”

The production manager made sure he had plenty of system headroom opting for two Ottocanali 4K4 DSP + D amplifiers. “Because we were unsure of the future usage for this installation when we chose the products, it was essential that we made as much provision for the future as possible. We were already aware of the possibilities offered by AoIP (Audio over IP) as well as the AES67 standard since we already chose this last year for our conference rooms, while my colleague, who manages the AV for exhibitions also bought Amadeus Audio PMX8D speakers and ML15D sub which hosts Dante cards. “Another factor when we chose the gear was the possibility for the installation working autonomously once programming was completed. Q-Sys manages the power on and off for the amplifiers as well as monitoring, thanks to a plugin dedicated to the Powersoft amps.”

However, at the time of choosing the gear the AES67 interoperability of the Q-Sys system and Powersoft Dante module had only just been announced and they needed to wait for firmware integration. Remaining confident throughout however, despite having analog/AES cables available as backup (the Powersoft amps automatically switching between the sources in the event of a Dante/AES67 network failure). There are obvious advantages of this design solution. “In a venue like ours, it isn’t always easy to avoid the electromagnetic disruption which can interfere with the audio signals over long cable distances. The two Powersoft amplifiers are located around 25 metres away and so an IP infrastructure allows us to be to free of this distance issue. We can also envisage future interconnection of the different areas in the venue with a standard IT network infrastructure.

Summing up, Dewi reports that the sound designers could not have been happier or more appreciative of the way in which their creations had been realised and reproduced. “During the final mixing stage, they were able to acknowledge the full dimension of their artworks. Finally, despite the challenging nature of the venue for accurate sound reinforcement the combination of Q-Sys, Powersoft and Amadeus Audio has worked wonders. “Going forward we can see that having such a high level of integration will allow us to answer future needs and consider interconnections that were until now impossible. Furthermore, we have a proper system monitoring solution from a simple tablet or PC situated on the other side of the building thus enabling us to take appropriate action within the actual audio processing architecture.”

“We worked very closely with Powersoft’s highly responsive team through the whole duration of the project. The processing and monitoring efficiency coupled with the flexibility of the amplification, the quiet cooling system and the AES67 interoperability of the Powersoft Ottocanalli DSP+Dante amps allowed us to make a reliable installation, which sees us perfectly placed for the future.