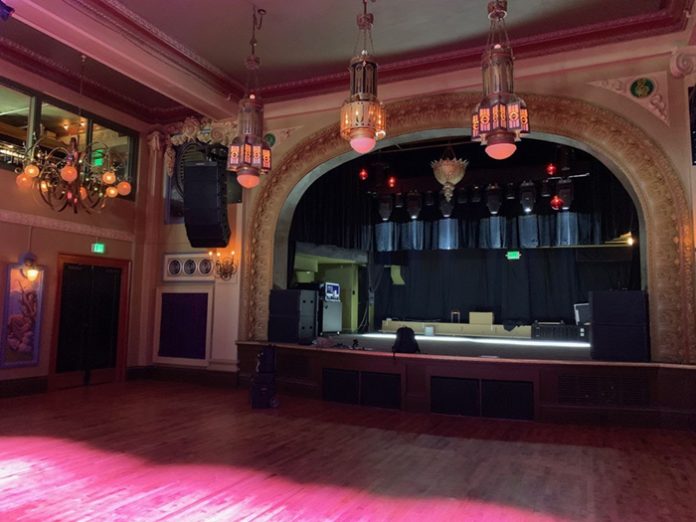 Since it opened last April, McMenamin’s Elks Temple Spanish Ballroom has become a go-to stop for artists touring the Pacific Northwest. Now a destination venue with Powersoft’s Quattrocanali platform, the Spanish Ballroom once served a different purpose but now hosts a wide variety of events.

Housed in a century-old Tacoma landmark listed on the National Register of Historic Places, the city’s Elks Temple was designed in the second Renaissance Revival style by Édouard Frère Champney and built in 1916 to house the local Elks fraternal organization. But, in the years since the organization moved into a new location in 1965, the abandoned temple fell into disrepair, until McMenamin’s — an Ashland, Oregon-based craft brewery that has built a chain of bars, restaurants and hotels with a series of successful real-estate revival projects — completely renovated the structure and turned its Spanish Ballroom into a fully up-to-date live music venue, powered by Powersoft Quattrocanali 4804 amplifier platforms.

Tone Proper AV owner Nick Moon, who also installed the sound system at McMenamin’s Crystal Ballroom in Portland, based the Spanish Ballroom’s rig on an update to his earlier design. “The Crystal Ballroom is a staple in Portland, where pretty much everybody who’s anybody plays,” Nick said. “The Spanish Ballroom is basically an extension of that idea, but in Tacoma. Now, when bands are touring across the country, they can hit Portland and Tacoma and keep going. So, the bands’ engineer can walk in, play the Crystal on a Friday night, then drive up to the Elks Temple Spanish Ballroom the next night. They can just drop in their USB drive and load in on the console, and they’re basically going to get the same experience, consistency-wise.”

McMenamin’s Spanish Ballroom employs 12 Fulcrum FW-15 monitors powered by four Powersoft Quattrocanali 4804 amplifiers. Using three channels per amp to power all 12 monitors – with the additional channel on each amp powering the sound system’s ancillary equipment – Moon made the best of what would have otherwise been a much more difficult load-in and installation process had it not been for Powersoft’s high-density amplification platforms.

“With Powersoft’s Quattrocanali platform, you can get a lot of amp channels in a small space,” Nick said. “The big thing for me is amp density – and, of course, sound quality. What Powersoft is doing with its amplifier platforms is pretty revolutionary. A lot of companies will sacrifice something in order to go for a smaller form factor, but what I like about Powersoft is that we don’t have to give up something to get it.”

After deciding to use the new monitors on the Spanish Ballroom, Moon needed to be able to get 12 individual 1250-watt processed channels of monitor mixes in four rack spaces. “For a lot of other manufacturers, that would be a two-channel amp with two rack spaces, so you’d need three times the amount of rack space to do what just four Powersoft Quattrocanali 4804s are doing. The processing is super powerful. You can put a ton of juice into one rack space and run the Quattrocanali 4804s full-out, and they’ll barely have their fans running. And, of course, they’re super efficient. When they’re in an idle mode they run on extremely low power, so you don’t have to worry about heating up the room if you’re using the system all day.”

Moon completed the installation by inputting the tuning file provided by the monitor manufacturer into Powersoft’s ArmoníaPlus System Manager software and making his adjustments to the EQ within ArmoníaPlus. “If you make adjustments directly on the console, then a front-of-house engineer can mess with it,” Moon said. “But if you do it in Armonía and save it as a preset, somebody walking into the venue doesn’t have the ability to change any of the house curves.” Using ArmoníaPlus, he increased the high pass settings on the original tuning file to mitigate any potential low-end problems in the historic ballroom. “We made our own high pass, because there are already four 18-inch speakers on the stage, and we wanted to take a little bit of low end off the stage.”

Renovating the Tacoma Elks Temple required a significant effort on the McMenamin’s part, and turning the Spanish Ballroom into a destination venue was no exception for Tone Proper AV. “Any time I walk into a building that’s really unique, I instantly get heartburn, because I know it’s probably going to be an engineering nightmare,” Moon said. Without ramps available to wheel equipment into the venue, Moon needed a lot more manpower than usual to muscle the pre-built rig up the venue’s steps.

”There was no loading dock, and we had to carry everything up and down stairs; and, since we pre-build a lot of the cable looms and do all the soldering our shop, we basically bring a working rig that we deploy and plugin, so it’s a lot heavier than just taking individual pieces up and then racking them. It required a lot to get everything in.

“McMenamin’s takes these old buildings and turns them into awesome venue’s, hotels and bars. It’s what they do. But, because they’re old buildings, and they’re not really designed with monitor engineers in mind, everything has to fit into a small footprint. And since monitor desk consists of the main 52-channel split, and right next to that are all the monitor amplifiers, to be able to have all the monitor amplifiers take up only four rack spaces for 12 mixes is amazing. The Quattrocanali 4804 is a juggernaut.”