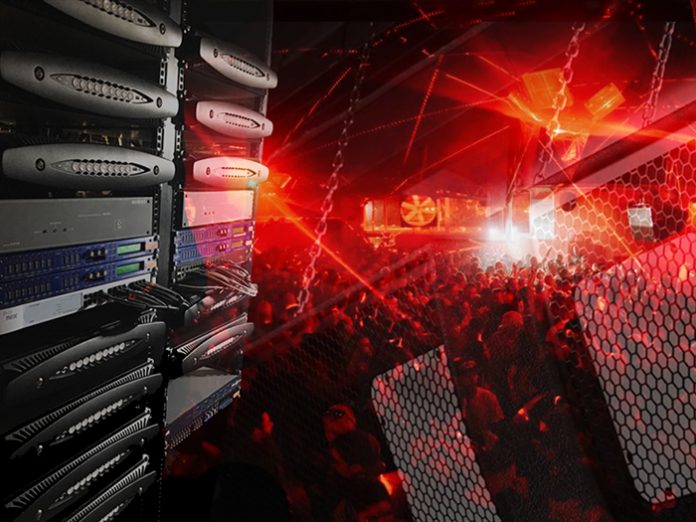 One of Ibiza’s clubs DC10, recently celebrated its 28th birthday, as well as marking two decades since the introduction of its keystone event, Circoloco. In order to properly acknowledge this momentous double anniversary, owners and co-founder of DC10 and Circoloco, Andrea Pelino and Antonio Carbonaro, gave the green light to a large-scale overhaul of the venue’s already impressive audio setup supported by Powersoft.

The new installation was set to encompass three main areas of the club – including their individual DJ booths – and required a major system architecture redesign. This vision became a reality thanks to a number of key relationships; and resulted in a comprehensive and professional audio system for the club – driven by a substantial backbone of Powersoft amplifiers.

Valerio Cherubini, owner and founder of project integrator, Loud Professional, explained: “For the last few years we have been extensively testing Powersoft gear, especially the X Series, and have had our best ever results. The optimisation of the system installed at DC10 became more precise thanks to the amplifiers’ fidelity and to the great potential of Armonía for truly detailed and smooth sound reproduction – we’ve never heard anything like it! This is why we decided to it was imperative to have Powersoft by our side.”

The massive amplifier inventory previously installed at DC10 (which has been in place for the past six years) was substituted for 20 of Powersoft’s powerful and energy-efficient X8 units. “It was an important investment for the future of this venue,” said Valerio. “The club owners trust our professionalism thanks to a long period of collaboration, so they gave us free rein to decide – and we only ever ask to have the best!”

“Powersoft and Armonía are often behind the best the Loud Professional performances, as they deliver something truly unique to the audience,” he continued. “Thanks to the amplifiers’ power and the fast transient response from the speakers, the audio at DC10 now packs an unrivalled punch. We also achieved a flat and smooth frequency response due to the precise Armonia presets, which made all the three installations extremely pleasant.”

Club owner Andrea agreed: “The systems have performed so well everywhere in the club. The amplifiers are really powerful and able to deliver a great amount of well-defined low frequencies, as well as the finest medium-high frequency response, to give a crystal-clear sound without ever causing listener fatigue. We strive to create comfortable rooms where you can listen to the music and I believe that’s what we have done with this upgrade.”

The ambitious project required an elite international team, which was comprised of George Stavro, director of Sonic Lab Audio USA / Integral Sound, Christophe Chappelle (also from Sonic Lab Audio) and Loud Professional Italy’s Cherubini, Fosco Cicola, Michele Azzimonti and David Mandaradoni. There was also a local in-house team that comprised of Pedro Comesaña and Adil Jaabak, who provided additional assistance and were responsible for the day-to-day operation of the sound systems throughout the season.

It was George who was originally approached by the club’s owners to design new sound systems for the all three rooms. He began: “On the first site visit, I was introduced to the team from Loud Professional Italy, who had an existing relationship with the venue. It was requested that I worked with them, but only if they were able to provide the speaker products that met my performance specifications. They did not have any speakers in their product line that did – so they offered to build some new ones.”

Loud worked closely with George on the new speakers, taking time to focus on presets that would help to achieve the desired results. “Once we were both happy with the acoustic and electrical performance of the speakers, we auditioned them for the club owners,” said George. “They were extremely happy with the results, so we designed systems that included these speakers for all three rooms.”

As Valerio alluded to previously, Loud’s relationship with Powersoft was also key to the install. George explained: “Power density and control was so important, as we required a lot of channels. Loud already had a great relationship with Powersoft and their X Series amplifiers were chosen as priority on the project. The company’s Armonia software was also a fundamental tool during the intensive research and development phase.”

George gave further detail: “The final layout shares some resemblance to the original design as far as some of the speaker locations were concerned, given that the architecture of the rooms remained the same. The relocation of the air conditioning ducting in the terrace allowed for better speaker placement, which aided the immersive coverage that we aimed to achieve. Sub arrays were also moved to distribute the low frequencies more evenly throughout the spaces. We made good use of Armonía to design all three of the systems, using the software mainly for the wiring system and configuring all of the DSP and racks in advance.”

Despite the crack team assembled and the quality of the new kit, the install was not without its hurdles. “The rooms provided more challenges than we would have liked,” explained George. “The roofs of both the rooms had reached their weight limits, so additional reinforcement had to be installed to handle the weight of the new sound systems. Elsewhere, the cavities for the sub bass speakers in the terrace were moved and enlarged to allow a better configuration. Speaker positions were also relocated in the main room to provide better and more even coverage.”

Further still, the team had to build an additional rigging structure in the patio area to handle the increased weight of the main arrays, as well as an additional delay sub position to reinforce sub bass towards the back of the space.

George added: “Most countries in Europe have introduced stricter voice level limits for entertainment venues and this venue was no exception. Our designs included more speakers distributed throughout the spaces to work with these requirements by having speaker sources closer to the patrons.”


With the installation complete, this tightly knit team was able to sit back and reflect on a successful collaboration. Stavro’s first impressions of Loud echoed this sentiment: “I found the team at Loud to be very knowledgeable, extremely flexible and very nimble when it came time to design new speakers that were never part of their product outline; delivering some great speakers that met our performance criteria. On top of their professional expertise, their entire operation was super friendly, warm and personable. This was the first collaboration between Sonic Lab Audio and Loud Professional and the start of what we hope to be a long relationship.”

DC10 owner Andrea Pelino added: “In my opinion, this is the best installation we have had at DC10. Everybody seems to agree, from DJs and producers, to promoters, booking agencies and visitors. We did it for all of them, ensuring that the sound quality is at its best and guaranteeing the maximum comfort.”

The last word though, must go to DJ / producer Seth Troxler – a regular at DC10 and one of the most authoritative voices when it comes to appraising the teamwork between these audio heavyweights. He said: “The collaboration has been definitive in changing the sound of the club. There is a precision and pressure now that allows me the definition I need to play my music to the best of my ability. Circoloco is a canvas for me and this sound has come to define how I able to paint.”