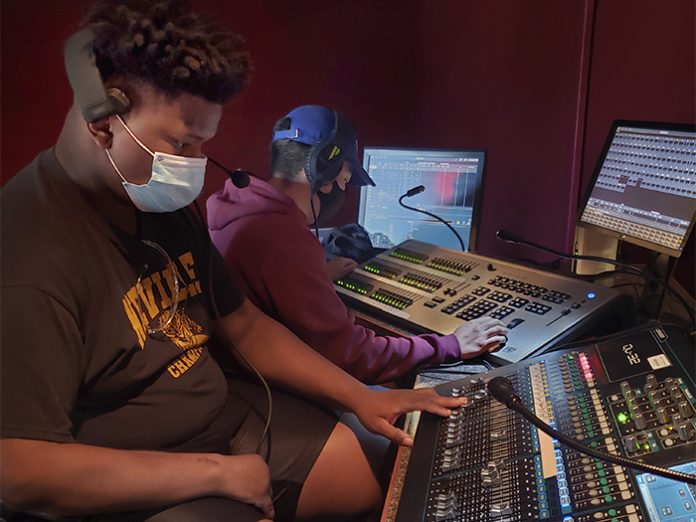 When the University of Louisiana Monroe (ULM) School of Visual and Performing Arts was looking to update its existing wireless intercom system, the task of finding the right equipment was left in the very capable hands of the program’s veteran Technical Director Steven Burnside. He found the solution he was looking for with Pliant Technologies’ CrewCom wireless intercom system.

Steven’s primary goal in upgrading the equipment at ULM School of Visual and Performing Arts was ensuring complete coverage throughout the entire building. “Our main auditorium was built in 1931 and made out of steel and concrete, so we really wanted to make sure we had a solid signal throughout,” said Steven. “We were able to secure a CrewCom demo and we were really impressed, right off the bat. With just one Radio Transceiver (RT), we pretty much covered the entire building. To take the system to its limits, we used four Radio Packs (RPs) and sent people to all four corners of the building, both upstairs and downstairs. We never lost the signal and that says a lot for a 700-seat venue. With the budget I was given and CrewCom’s outstanding performance, it was an easy decision to purchase the system.”

The University worked with Pliant manufacturer’s representative, Sigmet Corp., and authorized dealer BMI Supply out of New York to purchase all of the necessary equipment, including one CrewCom Control Unit (CCU) and one CrewCom Radio Transceiver, five CrewCom Radio packs as well as Pliant’s SmartBoom® PRO single-ear headsets.

“The CrewCom system with its expanded range allows us to connect two theaters with one system, which we were not able to achieve with our previous wireless intercom,” added Steven. “Prior to CrewCom, we were basically rewiring our system every time we swapped spaces, just so we could have the wireless intercom—so this upgrade has been wonderful. It is very intuitive as far as using the packs themselves and I really like that you can just connect the computer to the control unit and make any adjustments.”

With a complete CrewCom system and SmartBoom headsets, ULM School of Visual and Performing arts can deploy a dependable, high-performing communications solution with ease. “I was happy to use Pliant’s SmartBoom because I like a headset that I can turn on and just use the boom as the mic on/off switch,” said Steven. “As the technical director, I usually run our sound board as well and it’s nice to just flip it up to mute. With this headset, I don’t have to search for any buttons.”

While the pandemic has left theatre productions up in the air, Stevenand his crew are hoping to use the new equipment for the University’s upcoming spring musical presentation of, The Addams Family. The show is slated for simulcast.