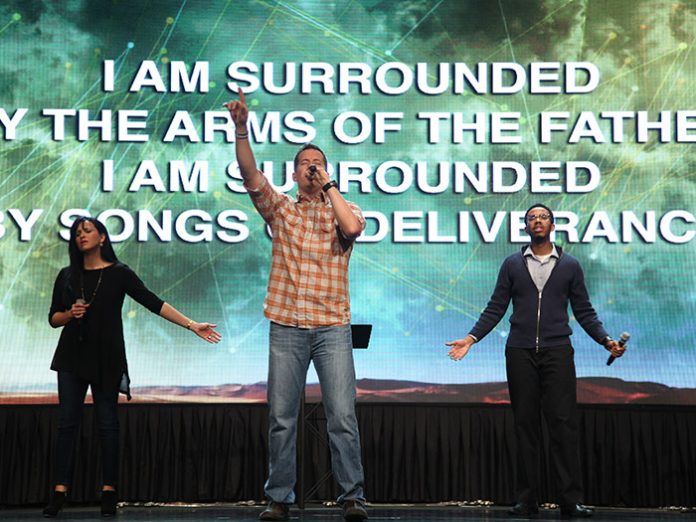 Originally founded in 1984, the Bethel World Outreach Church has seen its ministry grow to where they currently hold worship services in six locations nationwide. As part of this growth, the worship family located in Brentwood, TN, recently underwent a building campaign to expand their ministry even further and in doing so they wished to make LED video a part of their worship services. While attending the WFX tradeshow in Nashville, Senior Pastor James Lowe found his solution for the new facility which was FLEXLite 6.9mm LED video tiles from PixelFLEX.

“With our Bethel Build Campaign underway, we were also about to undertake a month-long sermon series where our pastor wanted to show HD video elements during the message,” began Technical Director Garrett Hestla. “This was something entirely new for us and since we wanted to bring LED video into the new facility as well, we started looking at all the LED video products that could really help deliver an impactful message. I’ve known about PixelFLEX for a while and so after our pastor also met them at WFX, we agreed the FLEXLite 6.9mm would be a great solution for our worship services.”

The FLEXLite from PixelFLEX is an economical solution to other traditional LED panels providing both indoor and outdoor options which can be installed and dismantled by one person, making them ideal for the house of worship market. With its bright, dense display and high refresh rate, incorporating FLEXLite it into any worship service takes no added effort, and its easy access back panels allow for simple on-site repairs without the hassle of removing the entire back of a tile.

“With the FLEXLite chosen we got to work loading-in so that we could be ready in time for the new sermon series,” explained Garrett. “We didn’t have a large crew so we had volunteers from the church assist with the load-in which started about 7:30 am. To build the wall, we stacked the FLEXLite tiles four-high and once it was installed you could easily see that we would definitely be able to create an amazing visual experience.”

Now ready for the services to begin, Garrett and the design team began working on the content needed to complete the LED video installation. As the content was easily uploaded, Garrett was able to see the full FLEXLite wall in action for the first time, and it certainly didn’t disappoint.

Garrett continued: “For the content, we like to use a system called ProPresenter and run a series of motion graphics behind lyrics, as well as show video announcements and use the screen for any multimedia needs of Special Guests speaking during a service. It’s honestly quite stunning to have the content going on behind you 16 feet tall because it really becomes part of the show and everything looks amazing.”

With the full installation now complete, the FLEXLite 6.9mm LED video wall was introduced to the congregation at Bethel World Outreach Church. Watching with joy from the front of the house, Garrett is not only grateful for how the LED wall has transformed their worship services, but also for the support they received from PixelFLEX along the way.

“I really can’t say enough about the support we received from the full team at PixelFLEX who has truly been there for us every step of the way,” concluded Garrett. “In our services, we really try to use the FLEXLite LED wall as an artistic expression. We want to give the worship services a tremendous visual impact, which in turn gives the congregation an immersive experience into the pastor’s message, and its performance has been outstanding.”