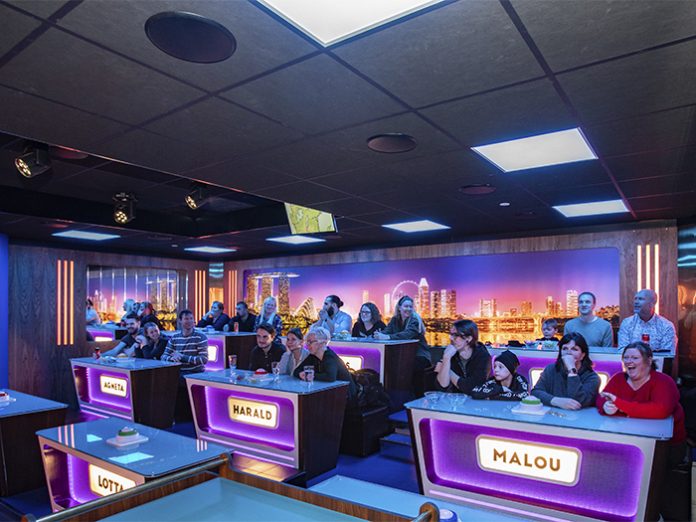 Game shows have been a staple of worldwide TV entertainment for decades. More than sixty years after the first game show appeared on American TV, audiences and contestants are still as enthusiastic as ever to participate in and consume every kind of format. Recognising the passion that the public has for this type of entertainment, On Air opened its first game show bar in Stockholm, replicating the TV experience for groups of friends and colleagues in a fun, relaxed atmosphere. The concept was quickly successful and after a second On Air opened in the capital, Pitcher’s, a multi-activity entertainments hub in the Swedish City of Örebo, opened the first On Air franchise.

Pitcher’s features a number of attractions including bowling, shuffleboard, arcades and a casino, and the opening of On Air has seen part of its extensive ground floor area carefully engineered to resemble a TV studio game show set. In the few months since its opening, On Air has become a massive hit with its customers, attracting huge numbers and out-performing all expectations. Fundamental to this success, according to Head of Sales, Patrick Haginge, was ensuring that every technical and aesthetic aspect of the ‘studio’ was of the highest standard:

“When we started On Air here, we said ‘if we’re going to do this, it must be perfect.’ To create a total experience we needed everything to be right – that’s why people keep coming back. It’s just so, so much fun because of the way that every element works together.”

High quality, discreetly sourced audio was absolutely essential for the gameshow environment and to meet the brief, Technical Manager Christopher Gothnier placed his trust in Pioneer Pro Audio’s brand new range of ceiling speakers. Having conducted comparative research into what the market had to offer, Gothnier spoke to Tony Boström, Pioneer Pro Audio’s Country Manager for Sweden and was impressed by what he saw and heard.

The 6.5” CM-C56T ceiling speaker and its 4” counterpart the CM-54T, constitute the most recent additions to the Pioneer Pro Audio range. With a discreet embedded design and rich in practical features, Gothnier was certain that they would perfectly meet the requirements of this unique setting. At On Air, to complement the meticulously designed studio, his team installed twelve CM-C56T units, driven by a single Powersoft 1204 DNT amplifier, in a mono 100V configuration. There are nine seating areas for contestants, each with a single speaker above and a further three at the front above the host. Everyone receives a uniform experience and Gothnier is clearly pleased with the results:

“First of all, the closed back of the 6.5” speakers gives a warmer sound than some of the 8” competitor brands that we have used in other parts of the complex and the mids and highs are excellent.”

From an installation point of view, he is in no doubt that the engineering behind the units has been closely considered from a practical as well as a sonic point of view:

“They are VERY easy to install. My guys came back to me and said that these are the best ones they have worked with. The way the speakers are made is clever and shows that a lot of thinking went into the design – the mounting tabs and locking mechanism keep things safe and simple to install and everything was very quick. We really like the way the system sounds, it’s very clear and given that we always work carefully to our budgets, it’s worth saying that the CM-C56T is competitively priced as well.”

On Air in Örebo demanded TV studio-grade perfection in every facet of its delivery, not least its audio system. Drawing on a rich heritage in sound, the design of Pioneer Pro Audio’s new ceiling speaker range met the challenge without compromise, to the great satisfaction of everyone involved. This was the first European installation of the CM-C56T and, perhaps unlike many of On Air’s contestants, has provided all the right answers in this incredibly popular venue.