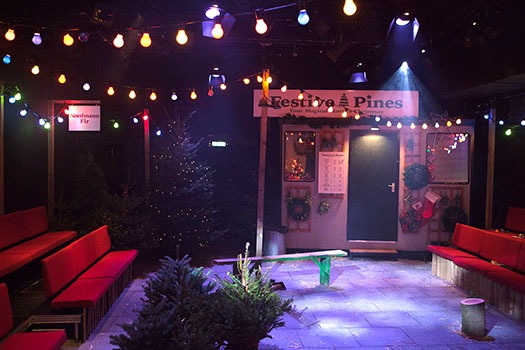 Leading UK theatre Lighting Designer, Johanna Town, made the most of Robe’s new DL4S Profile fixture when lighting ‘Pine’ at the Hampstead Theatre, in London.

The setting for Jacqui Honess-Martin’s new festive tragi-comedy is a Christmas tree retailer and the action spans a month over December from early morning to midnight. The witty and incisive narrative incites laughter and tears as a group of 20-somethings from mixed backgrounds and experiences sell Christmas trees from a street outlet along the way singing all those gloriously clichéd Christmas songs you love and hate.

Hampstead Theatre is a small but highly acclaimed studio venue with a limited budget, so Jo explored some options for additional lighting, and Robe was able to help out with the two DL4S Profiles.

She was initially slightly unsure of putting a fully spec’d moving light into a grid with only 3 metres of headroom, but was soon reassured by the compact size and neat appearance of the DL4S profiles. “Once rigged they blended in with the rest of the lighting rig unnoticed,” she observed, adding that the fixtures were also near-silent with no fan or movement noise making them even more unobtrusive.

The lighting also needed to recreate authentic natural light levels that transported everyone involved into cold outdoor environments where darkness falls by 3-4 p.m. ”It’s tricky to light faces and ensure the show was not constantly dark and deep blue.”

The second challenge was lighting the musical numbers with minimal resources- the theatre’s house fresnels, profiles and PARs were soon consumed in dealing with the general action, so the DL4S Profiles were extremely useful.

Johanna found they were great for defining certain acting areas during the natural scenes as well as helping to pop-out all the Christmas songs making them fun and removed from the rest of the story. “It would have been a very different show without the fixtures,” she said.

At three-metres they felt impressive and wide at 45°, while the prism helped expand the light into a larger soft wash commented Johanna, adding, “The gobo mix is theatrical and would suit any production. I liked the break ups along with the hard clouds cutting through the space”. She also created a highly effective soft moving snow effect all over the stage by combining the prism with the effects wheel.

Johanna also appreciated the colours. “They are extremely accurate and provided vibrancy for the musical numbers alongside subtle shades of cool greys and evening blues as the natural light shifted over the course of the play.

“In the past, picking a colour direct from the desk for an LED source would result in substantial light lost from the units, but not now with the revamped DL4S Profile – there was no light loss.”

She also made the most of the good range of colour temperature options in the unit which are essential for a quality and refined LED source like this, and for Pine, the tungsten flag was used very effectively throughout most of the show.