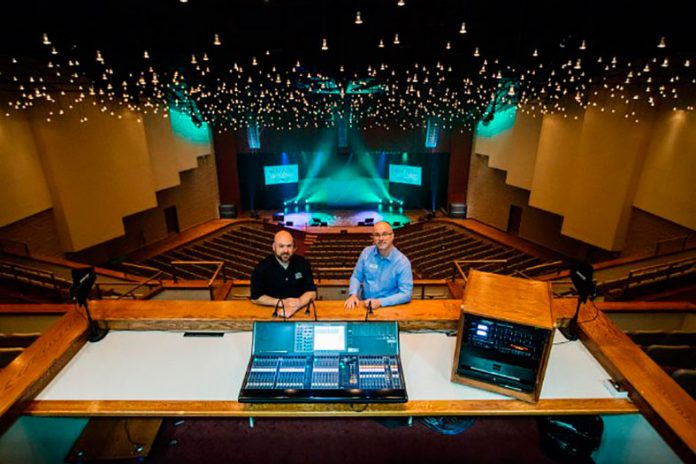 With its festive ceiling canopy of 1,300 “twinkle lamps”, Phillippe Auditorium, the centrepiece of Indiana Wesleyan University’s Phillippe Performing Arts Center, is a visually striking venue. But what audiences have been most dazzled with recently is the 1,150-seat proscenium theatre’s sound, thanks to SineWave Audio’s recent installation of an L-Acoustics Kara and Kiva loudspeaker system supplied by Certified Provider Mid-America Sound.

First dedicated in 1996, the $9 million PPAC is home to IWU’s music and theatre departments and serves as the cultural centre of the University, hosting concerts, recitals, theatre, lectures, youth conferences and more. And although the facility boasts one of Indiana’s most prestigious architectural design awards, it was widely felt that Phillippe Auditorium’s original sound system, designed as a distributed speech reinforcement system, lacked the SPL, stereo capabilities and fidelity necessary for modern touring productions.

With such a broad range of events held in the space, SineWave Audio designed a hybrid system comprising left and right stereo arrays of 11 L-Acoustics Kara enclosures flown below two SB18 subs, extending the range of the subs for music and playback, with a centre array of 15 compact Kiva enclosures primarily used for speech reinforcement. Three more Kiva are positioned on the stage lip for front fill, and four auxiliary-fed SB28 subs are available to maximise low-end impact when concerts are held in the room. Furthermore, six coaxial 12XT plus two self-powered 112P enclosures serve as stage monitors, and all loudspeakers (sans the 112P) are powered and processed by a combination of seven LA8 and two LA4X amplified controllers.

“Although Phillippe Auditorium is fairly ‘well-behaved’ in terms of acoustics, the drastic height of the balcony, both in terms of the farthest seating row and distance between the lower balcony and the floor listening areas, proved a bit challenging when initially thinking about a new system,” noted SineWave Audio President and Founder Micah Dean. “However, L-Acoustics’ Soundvision software enabled us to very accurately model the ideal number of Kara and Kiva necessary to perfectly cover all of the seating areas, yet keep that energy away from reflective surfaces like the face of the balcony. The final result very closely matched the prediction and we achieved a measured variance of no more than +/-2dB throughout every seat in the house, which is fantastic.”

“Although there are certainly many great systems on the market, I believe that the Kara and Kiva combination has been absolutely the best possible choice for the Phillippe,” said IWU Technical Coordinator of Sound, Lighting and Media Phil Huber, who also looks after systems at the campus’ 3,800-seat Chapel, Student Centre and other venues. “The rig has such warmth and clarity, which makes this intimate space feel even more intimate. Standing at front-of-house, which is the farthest listening position in the room, we can now hear the subtlest details—even at whisper low levels—that we never heard reproduced in the room before. The new PA brings every seat in the house very ‘close to the action’ and feels extremely consistent throughout the space.”

Phil added that everyone at the University has been very impressed with the L-Acoustics system. “The chair of our music department was amazed at how well the system fit the room acoustically and aesthetically, and we’ve had many other faculty and visiting engineers tell us how much they’ve appreciated the upgrade,” he said. “I’ve been just as awestruck. Not only does the new system sound amazing, it looks good doing it! And what continues to amaze me is how little EQing needs to be done. We no longer have to worry or make excuses for how things sound—the system does all the work, allowing us to focus on the music.”