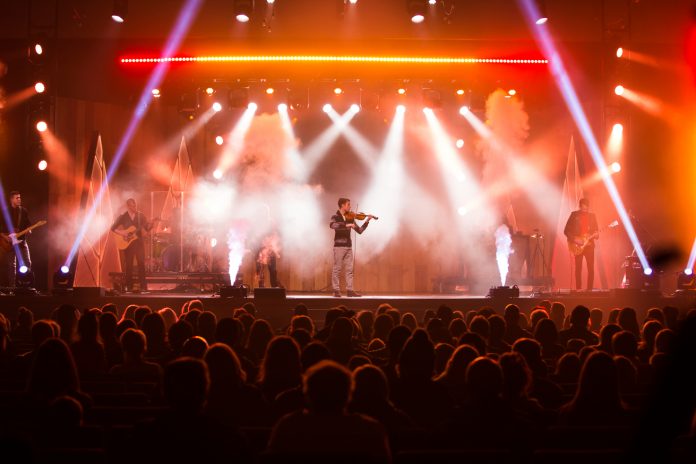 In 2002, Parkview Church moved into a new larger campus to accommodate its growing membership. At the time about 600 people attended Sunday services at the 54-year-old house of worship. Today well over 7,000 people come to the Orland Park church or one of its two satellite campuses to worship every weekend.  There are many reasons why Parkview Christian, which is ranked by Outreach magazine as one of the 100 fastest growing churches in the US, has attracted so many new members. High on that list is its commitment to connect to worshippers with services that are relevant to modern sensibilities.
This commitment was very evident in Parkview Christian’s well-attended Christmas service this year. Drawing over 20,000 people, the service touched hearts and souls with its warm, uplifting message, a communal candlelight observance, and contemporary praise music featuring Notre Dame University violinist Tim Michuda.  Adding to the atmosphere was full production lighting support by JR Lighting Design, Inc., who provided a large lighting rig consisting of 70+ fixtures that prominently featured 24 Rogue R2 Wash RGBW fixtures and 4 Vesuvio RGBA LED foggers from CHAUVET Professional.
The Rogue R2 Washes were dispersed symmetrically throughout the rig.  Eight were hung on an upstage truss as automated backlight, with the remaining 16 rigged on four vertical ladder structures (two downstage and two upstage) with four R2 Washes each.
“While I really don’t design and program much at all these days, as my role has changed significantly to business development and specifications.  However, Parkview is a longstanding customer of ours and requested that I take on the challenge this year.  The Rogue R2 Washes served many purposes in the design, from theatrical backlight to aerial effects and theatrical sidelight.  One of my pet peeves is a calibrated white point, and the Rogues generated a range of excellent white light and color mixes,” said Jason Reberski, owner of JR Lighting Design.  “The idea was to keep a very clean design and break the ‘horizontal linear aesthetic’ with the vertical ladders.
“In addition to the performance of our Rogue fixtures, we were helped by the work of our team,” continued Reberski. “JR Lighting Design, Inc.’s Director of Operations Kevin Rosenhagen managed the account and coordinated production logistics, and Systems Integration Manager Justin Litterio engineered the system and conducted all CAD work.”
Adding to the impact and drama of the services were the 4 Vesuvio RGBA foggers that were arranged across the downstage deck. Sending thick plumes of water-based fog 20’ in the air, the Vesuvios created a powerful impression at key moments during the Christmas music performances.
“The Vesuvios were used in the opening number to accentuate the chorus with both sharp blasts of quickly-dissipating fog that were reminiscent of pyrotechnics, as well as sustained streams of fog that created a ‘cryogenic burst’ effect.  Again, even the white light mix of the Vesuvios was calibrated to 5600K.
“Fortunately, with the very precise cueing that needed to be repeatable for the nine services I was able to timecode all of the musical portions of the show on a grandMA2 desk with full pre-viz prior to production. Our goal was to support the service and the music with lighting that engaged the audience and supported Parkview’s ministry.”