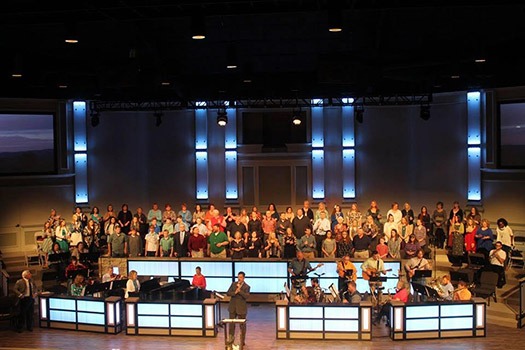 Often referred to as the City of Colleges, because it’s home to three large institutions of higher learning, this picturesque city in central Arkansas has a well-deserved reputation for being tech savvy. It’s been rated the sixth Geekiest City in America. Forbes tabbed it as one of the top 20 cities for young professionals. Hewlett-Packard recently opened a facility in town, attracted no doubt by its educated labor pool, which includes an impressively high share of college graduates.
A church that draws people from such a tech-driven population would be wise to offer a contemporary worship environment. Recognising this, Pastor Don Chandler of the Central Baptist Church contacted Paragon 360 to modernise his 900-seat house of worship’s sanctuary. The Springfield, MO company accomplished this feat in stunning fashion, thanks to some help from 90 LED fixtures from Chauvet Professional and its sister company ILUMINARC.
“The church’s building was barely over 10 years old when we were contacted, so it wasn’t terribly outdated,” said Donnie Brawner, President of Paragon 360. “However Pastor Chandler and the church’s leadership were seeking a more contemporary environment to better connect to their growing congregation. We wanted to give the sanctuary a more open, clean and modern look by adding new lighting positions and a control system, as well as new scenic and architectural elements.”
Anyone who visits Central Baptist’s renovated sanctuary is sure to agree that the Paragon 360 team succeeded in meeting this goal. The church’s worship area has a sleek look that projects a contemporary open feeling while being solemn and inspirational at the same time.
Gone are the Gothic columns on the back wall of the worship centre platform and the matching trim around the video screen, “The most dated scenic elements of the church,” according to Donnie. In their place are illuminated frosted acrylic glass elements and new paint schemes. Extending this contemporary look, Paragon added wood/acrylic railings on the side of the choir riser system, as well as modesty walls in wood and textured rock, graphics in powdered coated housing ,and the company’s signature DE-360 Drum Enclosures custom finished to match the new surroundings.
Paragon accented and dramatised the new scenic elements in the church by deploying the Chauvet LED fixtures, including 33 ILUMILINE LΩGIC 12 strip lights from the company’s ILUMINARC division, as well as 10 COLORdash Batten-Quad 6, 10 COLORdash Batten-Quad 12 linear washes and six Q-Wash 560Z-LED moving yoke washes. Also included in the new lighting system are 11 COLORdash Par-Quad 7s from CHAUVET Professional, plus 19Wedge Tri uplights from Chauvet DJ.
The ILUMILINE LΩGIC 12 strips are used to uplight the new illuminated frosted acrylic glass panels that replaced the gothic columns. By bouncing rich and saturated colored light off the reflective surfaces of these panels, the fixtures add an extra dimension to the overall look of the worship area.
Paragon uses the Batten-Quad fixtures to illuminate the choir riser modesty wall acrylic panels from the inside, giving them a lustrous contemporary look that draws the attention of worshippers to the stage. The batten fixtures are also positioned to illuminate the graphics in the stage modesty walls. The Q-Wash 560Z units in the rig are used for backlight on a new mid-stage truss position that Paragon added.
Rounding out the lighting rig, the COLORdash Par-Quad 7s are used to light the small columns at both ends of  choir and stage modesty walls, while the Wedge Tri units uplight sconces that were custom made by Paragon in the worship area.
“We used the lighting to illuminate and warm the stage, but beyond that we relied on it to accent the scenic and architectural elements we put in place and make them more impactful and dramatic at a reasonable cost,” said Donnie. “Chauvet fixtures are tools we use to accomplish our goal of creating a more engaging worship environment at a cost that is reasonable for churches that often have to work on tight budgets.”
Donnie’s enthusiasm is shared by the leadership and congregation at Central Baptist. “The transformation that has taken place in the worship center at Central is beyond our imagination,” said Darrel Spigner, Associate Pastor of Worship Ministries at the church. “Paragon gave us the most for the dollars we had to spend. They exceeded our expectations in every way possible.”
As Central Baptist’s experience demonstrates, creating a worship environment that engages an educated forward-looking congregation doesn’t have to involve a big investment. It just requires the intelligent use of resources. One would expect nothing less from a dynamic church in the “City of Colleges.”
www.chauvetlighting.com