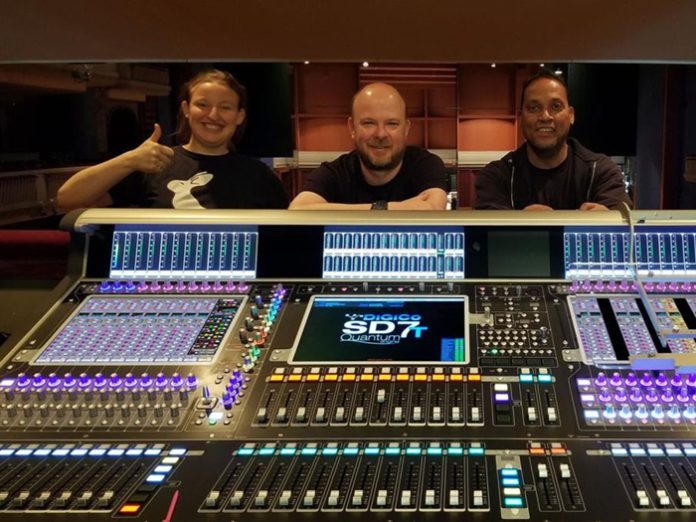 St. Paul, Minnesota’s renowned Ordway Centre for the Performing Arts has installed a new DiGiCo SD7T Quantum console in its main Ordway Music Theatre, continuing its strategic reliance on DiGiCo SD-Range technology that began when the centre opened in 2009 with a D5 Live desk in the same venue. During a substantial facility upgrade in 2015, three SD9 consoles were installed in the centre’s newly constructed Concert Hall—an SD9 at front-of-house, an SD9B at the monitor position, and another SD9B in the studio—with a fourth SD9 added in 2017 as the work surface for the Music Theatre’s recording studio.

Equipped with DiGiCo’s theatre-specific software package, Ordway’s new SD7T Quantum is paired with two new 56×40 SD-Racks fully loaded with 32-bit Ultimate Stadius Mic Pre-Amps and was installed in early July by Eden Prairie-based Audio Logic Systems, which has been the centre’s systems integration partner from the beginning. The installation was just in time for the opening of what is the most ambitious iteration yet of the Tony Award-winning musical 42nd Street, which ran at the Ordway’s Music Theatre venue July 23 through August 11.

“I lobbied for the SD7T,” said Andrew Luft, Vice President of Building Operations and Production at the Ordway Centre for the Performing Arts. “The D5 Live was a great console but it would not have been able to support this version of 42nd Street, which has 32 channels of RF vocal microphones and 28 channels of wireless tap-shoe mics. There was some serious tap choreography by Jared Grimes on this show, and the sound of the taps was deeply integrated into the arrangements with the nine-piece orchestra and two keyboards. We needed the SD7T.”

Andrew said the SD7T Quantum’s ability to manage what were over 60 wireless microphones on stage, with “sends literally going everywhere throughout the theatre” for the complex sound and production design by the successful Broadway team of David Patridge, John Shivers and Brian McDonald was essential to this production’s success, eliciting positive reviews that praise the production’s sound. “The SD7T’s ability to sum all of those channels really made managing this show so much easier,” he added.

In addition to the newly installed SD7T Quantum console, this latest upgrade to the Ordway Centre fully extended the Optocore fibre-optic network that had been installed earlier in the Concert Hall and Concert Hall recording studio. “We have now built out our fibre network to include the entire centre, along with a 128-channel Dante infrastructure to go with it,” said Andrew. “We have similarly configured the worksurfaces in all of the performance locations in the Ordway Centre, and they are all connected on the Optocore network. Before, we could send some stems from the Concert Hall to the Music Theatre; now, we can have complete productions move back and forth between them and the studio, as needed, and even out to the loading dock for recording trucks or streamed to the internet.”

The implementation of the new SD7T means that Ordway Centre now has a world-class workflow capability for theatrical performances, with features such as Cast Management Alias that controls channel settings, such as EQ, Aux sends or dynamics, on the desk from cue to cue and automatically updates throughout the show, and the Players tool, a function that accounts for character changes and changes of cast and allows operators to select which actor is playing a particular role. The entire production is then automatically updated with all the correct settings but without destroying the specific programming that’s been made from cue to cue.

“Broadway-level designers know how to use these tools, so having the theatre software package here is part of our long-term planning for keeping the Ordway at the cutting edge,” Andrew explained. “Users can walk in and set the entire console up so it’s completely comfortable for their way of working. And with Quantum, the summing power is incredible—the console can do the math and it’s not going to ever run out of processing power. The SD7T Quantum was certainly the key to future-proofing this venue for years to come.”