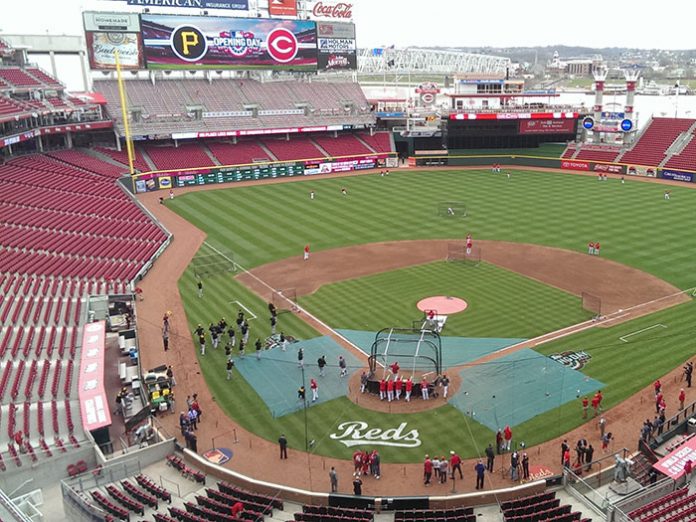 “The 112IM fit the specification for a medium format all-weather loudspeaker with superior vocal intelligibility,” explained Norm Stout, Industrial Communication & Sound. “We had not used One Systems loudspeakers before but working with their sales rep and the company, decided they would be a perfect fit.”

The One Systems 112IM is a high-performance 12-inch two-way loudspeaker system with a strong injection-molded enclosure, making it ideal for the Great American Ballpark application that required high vocal intelligibility and sonic accuracy.

“The project scope was to replace a number of existing loudspeakers, so the mounting locations were predetermined,” added Norm. “Based on the location we had to custom design a mounting bracket that would accommodate the speaker dispersion angles successfully to cover the intended audience area. We designed the bracket to give us a certain degree of rotational latitude to be fine-tuned after the loudspeaker was hung.”

“Each of these required special attention so that the loudspeaker face was not obstructed,” Norm continued. “There were required variations in loudspeaker elevation due to existing conditions such as video walls, building facades and more. Only one group of the One Systems 112IMs were installed with the standard factory U-bracket.”

Norm noted that Industrial Communication & Sound worked with a local fabricator to facilitate manufacturing, welding, hot dip galvanising and painting of the brackets.

Most of the 112IM loudspeakers were installed with some degree of protection from the elements, tucked under eaves or other structures when possible. Only a handful of loudspeakers in the right grandstand were mounted out in the open. But even with some protection, it was of extreme importance that the loudspeakers be capable of handling even the worst weather scenarios.

“When we were done we walked through all of the areas and it sounded terrific,” concluded Norm. “The ballpark is extremely happy with the end result and when the client is happy, we know we’ve done our job right.”