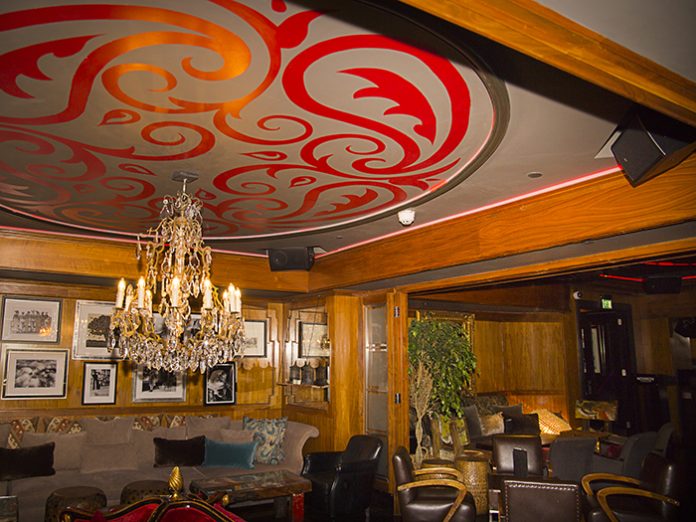 Located in the heart of Mayfair, Novikov Restaurant & Bar was the first restaurant to be opened outside his native Russia by award-winning multiple operator, Arkady Novikov. Extending over three floors with two distinctive restaurants and a highly exclusive basement lounge bar, Novikov has enjoyed huge success since its opening in 2011 and remains one of the favourite haunts of London’s glitterati. When the venue decided to upgrade the sound system in the Lounge, they turned to Toby Jones at Middlesex Sound & Light for advice. Jones had no hesitation in recommending a KV2 Audio system to deliver the nightclub feel that Novikov was looking for.

“When I visited Novikov at their request to see what could be done, I saw straight away that KV2 would be the ideal solution, but I didn’t want them to take my word for it,” said Toby. “I insisted on a demo in situ so that they could compare with their current system and judge for themselves. They instantly fell in love with the product so we were given the green light to proceed.”

For the main lounge and bar area, Toby specified eight ceiling-mounted KV2 ESD10 compact, two-way, high output loudspeakers with a 10-inch trans-coil woofer and a wide dispersion rotatable horn supplemented by two high power ESD1.18 and two slightly smaller ESD1.15 subwoofers. Two compact, low-profile ESD25s serve as powerful yet discreet infills for one of the lounge areas off the main room. A second chill-out zone known as the Union Jack room is served by four ESD6s and a single ESD1.15 sub. Finally, the DJ booth has been equipped with a pair of ESD6s and another ESD1.15 sub.

“Novikov was looking for a system that delivers clarity, even coverage throughout, and true depth of audio – in other words, sonic excellence,” stated Toby. “The Lounge is a destination venue in its own right with world-class DJs performing every week, so they needed a world-class solution, including the DJ monitor system. KV2 provides everything they required from a sonic point of view, and we were even able to utilise the existing infrastructure based on a BSS Soundweb London BLU-100 DSP backbone controlled via a BLU-10 touchscreen which is capable of managing the three zones. The results are superb.”
Grant Lee, operations manager at Novikov, agrees: “Toby and his team have done a great job in upgrading the sound experience in the Lounge to the level it deserves to be at, even whilst retaining key elements of the previous installation. The DJs love it – KV2 is pretty well known in the club scene anyway – and our guests love it. We can create a proper Ibiza-style vibe at night with decent levels that sounds amazing – clean, detailed and zero distortion – and a smooth, low-level chill-out atmosphere during the day. We’re all very pleased with the results.”