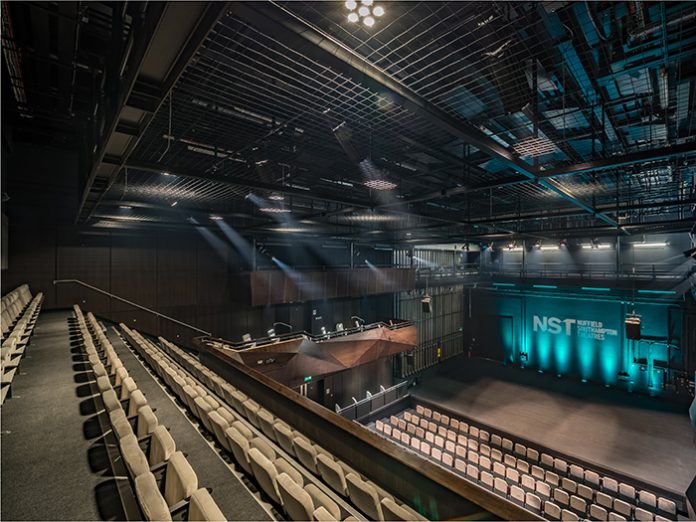 Nuffield Southampton Theatres (NST) City is a new arts complex in Southampton, UK. It needed highly flexible solutions for its production lighting, performance audio-visual systems, which have been installed by Northern Light.

Sited in the very heart of Southampton NST City, it houses a fully flexible 450-seat main house which doubles as a cinema, a 133-seat black-box studio, workshop, rehearsal space and screening facilities, as well as offices, bar, café and a restaurant.

Working to Arup’s specification, and directly for builder and main contractor Galliford Try, Northern Light provided a full technical package including lighting, sound and video, as well as a roof mounted satellite dish to receive broadcast from the National Theatre.

The AV infrastructure has been designed to support protocols, with integration being given at this time for Dante and MADI, as well as traditional analogue and AES connectivity, with a fibre backbone linking the rack rooms and running out into both auditoriums. Northern Light manufactured and installed 156 facility panels and five equipment racks for lighting, sound and comms as well as a bespoke stage management desk and its own paging stations from sister company, Stage Electrics. The Stage Electrics in-house cable workshop provided a range of over 260 custom-made, tour-grade cables, including EtherCON, DMX, mains and multi-cores.

“We installed, terminated and tested all the AV and lighting control cabling – over 20,000m in all – and supplied both the building-wide paging system and the house and work light control systems, which were programmed and commissioned by Northern Light’s Steve Chappell,” says Project Manager, Matthew Addison. “We included a dimming system which can work as dimmed, relay or constant power for a range of lighting sources. This has the advantage that it can be used for LED lighting in the future, making sure NST City’s environmental credentials are to the fore.”

The cinema system for the main auditorium also features a Barco 12K projector as well as a Sennheiser infrared assisted listening system. For added flexibility, portable PA and production lighting equipment was also provided, which can be used in any part of the complex.