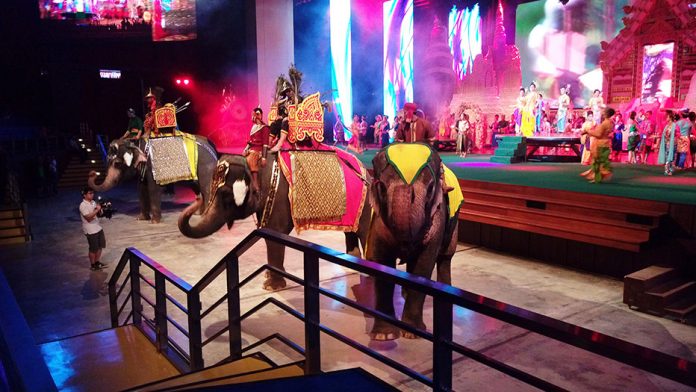 A new theatre has been constructed in the Nong Nooch Tropical Botanical Garden in Pattaya, one of Thailand’s most popular tourist attractions. The new build features a highly specified GEO S12 line array system and the first ID Series cabinets in Thailand.

Nong Nooch, a 500-acre botanical park, has been open to tourists from around the world for over three decades. Famous for its elephants and tigers as well as the rare plants in formal gardens, the park attracts over half a million visitors a year. Replacing the original 1980 theatre, the new venue is nearly 12,000 sq metres, and can accommodate audiences of 2,000 for theatre and concert performances. These cultural shows, which include elephant acts, required a fully-featured 5.1 surround sound system which was designed and installed by Fuzion Far East.

For the main PA, GEO S12 line array modules were chosen and installed in an L-C-R configuration, with the three clusters each containing seven x GEO S1210s plus a S1230. A total of six x RS18s provide sub-bass, flown in two groups of three above the stage between the GEO clusters. The PA cabinets are powered by NXAMP4x4, six units in total, all fitted with NXDT104 cards to run over a Dante network. At the front of stage, four x ID24 units provide frontfill. This is a Thai debut for these supercompact speakers, barely 300mm wide, which are used in tandem with another new NEXO product, the DTD-TD Controller, which deliver advanced speaker control processing in a compact rack-mounting unit that can connect to the Dante network.