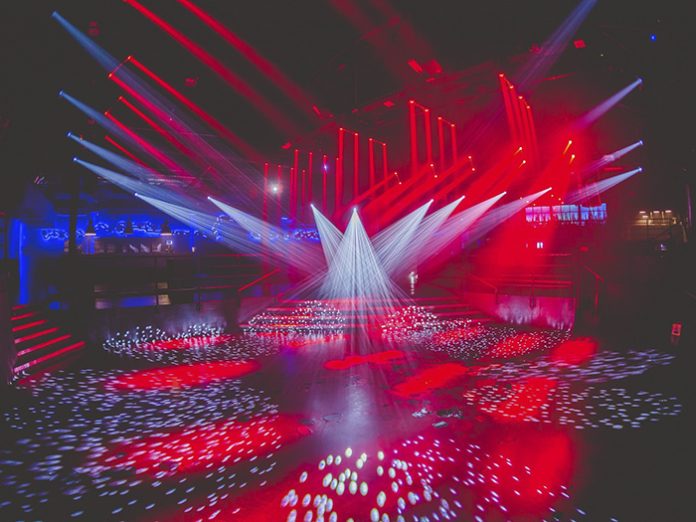 German production company LaserFrame recently installed Elation Professional Platinum HFX hybrid moving heads and ACL 360 Bar effect lights into one of the world’s top clubs, Bootshaus in Cologne. Used for a variety of stunning effects in the popular club’s main dance area, the new lighting is another important step in the club’s continued rise up lists of the best clubs in the world. Bootshaus ranks 17th on DJ Magazine’s list of the world’s best nightclubs and second in Germany.

Located at the Cologne shipyard, Bootshaus has been an integral part of the city’s club culture for more than a decade. Primarily a techno club, Bootshaus attracts a clientele of sophisticated clubbers who often dance to the beats of top DJs like David Guetta, Avicii, Hardwell, Afrojack and Tiesto. The club is all about quality and as a top club maintains high standards when it comes to its lighting and sound systems. Pyro, Co2, lasers and confetti are part of the standard repertoire as well.

Bootshaus houses three rooms – the Mainfloor, the BLCKBX and the Dreherei, an old workshop – plus a large outdoor area where open air parties can be celebrated. The Mainfloor is the largest space with a total capacity of 1,200 guests. It is here that 16 Elation Platinum HFX and 20 Elation ACL 360 Bars are used as part of an integrated lighting concept around the dancefloor.

The Platinum HFX is a multi-functional fixture that offers many options in one fixture from beam effects to big flower looks to colour washes. Packed with colour, graphics and effects options, the mid-sized light houses a 280W Philips MSD Platinum 14R lamp and can emit up to 12,000 lumens of power.  “We decided on the HFX due to its excellent price:performance ratio,” stated LaserFrame owner Guido Schütz.

He added: “From my perspective it was the best on the market. We tested it against hybrid lights from some of the top manufacturers and it came out on top. The most convincing fact about the HFX is that it´s a fantastic and bright spot-moving head that can also do a fantastic beam – that is the quite the opposite at all other manufacturers.” Located in the town of Kerpen, near Cologne, LaserFrame is a general contractor for Bootshaus and handles all things technical for the club from installation and programming to lighting operation at special events.

Guido added that the club was also looking for a unique effect light to add high energy looks to the dance floor, and as LaserFrame preferred to acquire lighting from only one manufacturer, decided on Elation’s ACL 360 Bar LED batten. The high-output color-changing LED batten with continuous rotation is incorporated as a key element of the design. Its dynamic movement effects and individual pixel control work with the other lights in the rig to give a number of one-of-a-kind design options.