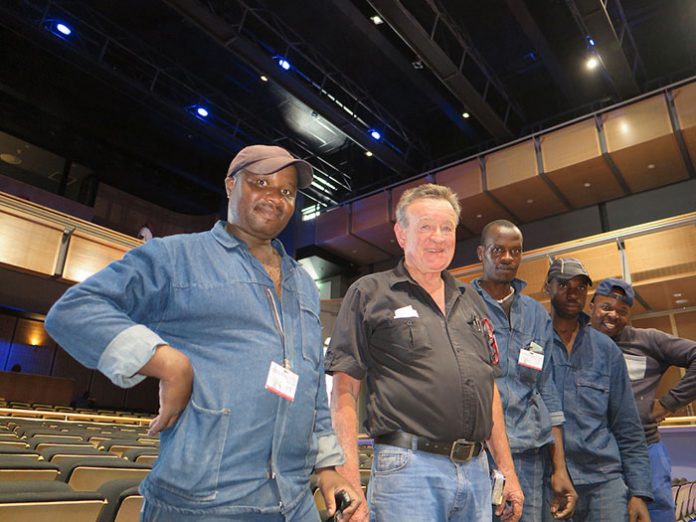 A new auditorium, which will serve as both a theatre and meeting point for assemblies and award evenings, has been built at The American International School of Johannesburg (AISJ). Theatre consultant Denis Hutchinson was on board both architecturally and for the technical specifications.

On the theatre lighting side, DWR Distribution was responsible for the supply of all the cabling and the data network for the equipment which includes an MA Lighting dot2 console, Philips Strand Lighting 6 Pack dimmer, 2 Strand Relay Racks and 10 Robe Robin DLX Spots. Furthermore DWR’s Rob Young and his team designed and installed a flying system, retractable seating for the Orchestra Pit and two hand operated curtain tracks.

Whilst in the United States on another project, Denis came across something that triggered the idea of making the theatre a completely LED lighting installation. Denis stated that there are many advantages to going the LED route including not having to change lamps, lower power requirements, no gels, all things schools often struggle with. He continued that until now, the quality of LED units has not really been good enough for facial light, but with the arrival of a new generation of units which have good colour rendering, decent fade curves and affordability, that situation has totally changed.

LED changes the cable infrastructure, which is one of the things Denis suddenly realised. Also, the need for a single 16Amp BS socket anywhere in the building was not required because of the way the better LED lamps are designed.

Denis went on to celebrate Powercon: “The great joy of putting everything onto Powercon, is that nobody can plug a vacuum cleaner in or use anything else. We’ve all had incidents in the past where our systems blew because of that! Also, there’s much less likelihood of nicking an extension cable that is Powercon to Powercon than there is of nicking an extension cable that is 16Amp to Janus as you can’t use it for anything else.”

In future installations, an option for Denis will be the recent arrival of combined power and DMX cables.

At the first sight and without practice, the control desks look complicated, so Denis organised a ‘control console shoot out’, very deliberately, not for his own benefit but for the teachers and pupils of the school, which turned out incredibly valuable. Denis explained the whole point was to find out which desk appealed to them.

A Philips Strand Lighting 6 Pack dimmer was added to the install, mainly because in the school’s other little theatre they have conventional generics and Denis wanted to give them the option of bringing gear across should they have a particularly large show or if somebody else came in with gear. It enables them to run enough power to put in an extra rack if need be, but so far the school team have worked entirely on the rig and the new technology provided to them, which for Denis is fantastic. On the manufacturing side, Rob Young from DWR came up with a few solutions.

The auditorium does not have a full fly tower, but they did want fly bars and Rob designed a system, which gives them 11 motorised bars. They are very simple stop and start bars, and they don’t have automated dead stops or variable speeds, but they are basically there to be able to drop a bar in, attach a piece of scenery and take it out again. The entire lighting rig, by the way, is accessible from purpose-designed walkways so that the venue is effectively a ladder free environment.

For the orchestra pit, Rob designed retractable seating. Denis explained further: “We didn’t have the money for an orchestra lift and as is typical with most schools, they wanted the maximum number of seats for assemblies and graduations and fewer for theatre productions. The school’s pit is deliberately quite shallow because while in a professional theatre you tend to hide the musicians. Also, when you’re talking within a school theatre, the parents need to be able to see their children so visibility becomes important. What we ended up with in the pit is two rows of seating, which are mounted on a motorised truck. Collapse the seats and the whole truck can then slide under the stage creating an orchestra pit; when no pit is needed, the extra seats are there. I have worked with Rob Young for years and get on like a house on fire. We have our moments because I always ask him to do things that are slightly impossible and I think he always rises to the challenge. Between us we seem to have managed to solve most of the problems and that’s great.”

The American School now has a totally up-to-date technical installation. For Denis the project has enabled him to think differently about future lighting installs and he is looking forward to the next one.