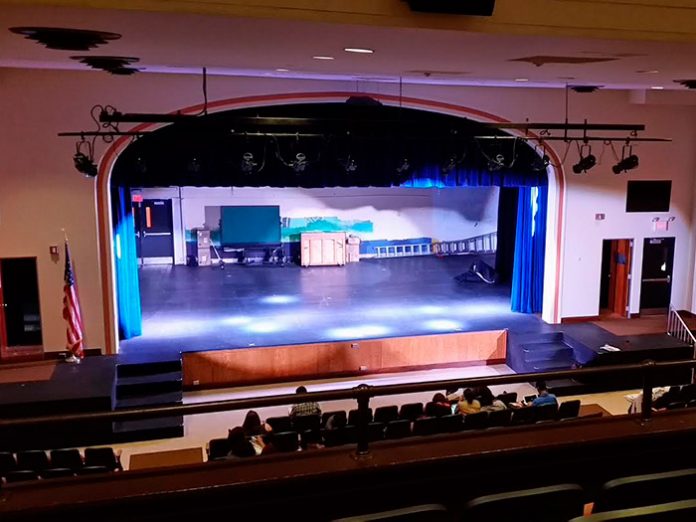 Linden High School has won New Jersey state championships in several sports in recent years and has even seen some of its alumni go on to achieve glory in the NFL and Major League Baseball. Still, at the auditorium, a common gathering spot for school-wide celebrations, the old incandescent lighting system was not making the grade.

Clearly, it was time for an upgrade, but like many schools across the country, Linden, which is located about 13 miles (21 kilometers) southwest of Manhattan, faced the challenge of upgrading to a new LED lighting system, while still staying within tight budget restrictions. Enter Nelson Enterprises. A theatrical systems integration services company, Nelson had recently helped a nearby high school make a successful – and affordable – transition to an LED system. Consulting with the school’s electrician (who would install the new lighting system), Nelson came up with a cost-effective solution, recommending a collection of Chauvet Professional fixtures and devising a clever repurposing of the school’s existing dimmer cabinet.

Nelson supplied the school with 56 Ovation E-910FC LED ellipsoidals, “not just because they were affordable, but because they also could serve a variety of purposes because of their color rendering capabilities,” said company president Bill Nelson. The school also installed 13 COLORado Batten 144 Tour units to replace the existing border lights, 18 COLORado 2 Quad Zoom units to replace the Fresnels, and four Ovation C-640FC cyc fixtures.

“The cyc fixtures were unlike anything the school had in the past,” said Nelson. “They were just one of the many things that elevated the school’s lighting capabilities. Aside from making the auditorium more energy efficient, the new system enhanced the overall repertory lighting plot that the school could run from the control booth. The fixtures themselves have proven to give the school a brighter stage than they ever had previously. They were positioned in ways to open more design options for the school. For example, there are eight of the Ovation color rendering ellipsoidals on stage at the end of the pipes for high dance light.”

Affordable fixtures were just one factor contributing to Linden High School’s ability to fit this significant lighting upgrade into its budget. The other was because the school could use the existing dimmer cabinet with the new system. “The system was designed based on reusing the existing dimmer cabinet with new relay modules,” he said. “We pointed out to the school’s electrician that the existing circuits could be relabeled and used as power sources for the new LED fixtures as manufactured by Chauvet. We stuck with the same fixture count the school had before and added new DMX data ports with distribution through Pathway Connectivity units.”

The net result is that the next time Linden High School students gather in the auditorium to celebrate a championship, attend a school dance, or any other function, the lighting system that supports the proceedings will be as sharp, bight and proficient as the school’s stellar athletic teams.