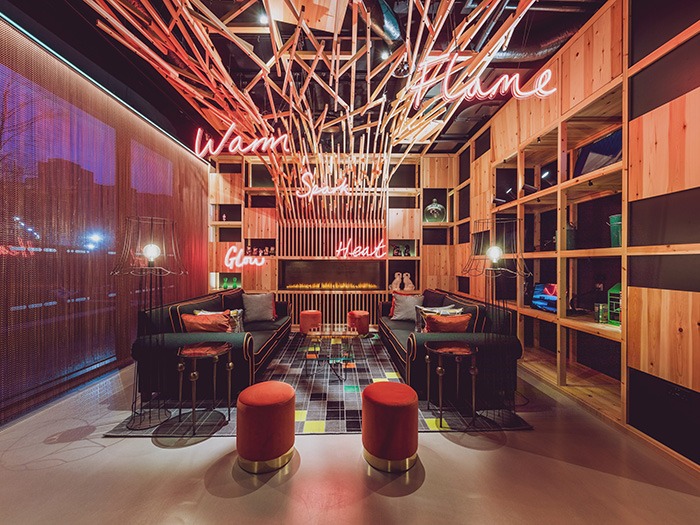 How did Elektra Lighting begin?

20 years ago, we were the architectural lighting division of White Light. At the time, there was a bit of a move in to make architectural lighting a lot more theatrical, a lot more interesting. The guy who owned White Light at the time, John, hired three people; me, another designer and a salesperson and made us the architectural lighting division of the company. We called ourselves Elektra, we had no clients and no portfolio to speak of, and it was really difficult. Just as we started to get some clients and some projects, John decided it wasn’t working and abandoned it. So, I bought it off him! I hired a small office and it was just me and a stack of businesses cards I’d accumulated. I managed to get the company off the ground and we’re now a team of 11 and the business is still entirely owned by me. We have a very good team and we mainly focus on hospitality projects, with a significant slice of retail.

What did you hope to bring to the world of lighting?

20 odd years ago, lighting design was very engineering based. It was focussed on getting uniform levels of light and looking up the kind of requisite area. If it’s a restaurant and the guide says 100 Lux, then you just put 100 Lux uniformly over the entire surface and with a grid of downlights, and that was it, really. That was completely not what we wanted to do. We wanted to drag lighting into the world of stage lighting, to create atmosphere and mood and the kind of candlelit restaurant feel with also little pools of light, as well as accenting and warmth for colour temperature. That’s really important to us.

Did you always know that you want to pursue a career as a lighting designer?

No, I fell into it totally randomly. I did a joint degree in theoretical physics and philosophy, which, firstly, allowed me to think really deeply about things, something that is definitely important when it comes to lighting design. Then, I did a master’s degree in ergonomic design, and got a job with a company that did all kinds of service engineering for architectural projects. I learnt a lot about air conditioning and water piping, but also a lot about lighting. After this, I went to work for a lighting consultancy for a couple of years and got some experience before going onto White Light. My degree allowed me to learn a lot of skills applicable to lighting design. I’m very numerous, which is what physics gives you as a degree, but, also, ergonomics teaches you to take into account a lot of other things and work practically.

What is your philosophy when it comes to lighting design? And how do you feel you stand out in the industry?

We are trying to create atmosphere with the lighting, and we’re trying to have a space that people want to be in rather than a space which is brightly lit. They’re not at all the same thing, we quite like a lot of darkness, I think it’s as much about the darkness as it is about the light. We’re also always very keen on having lots of little pools of light over the right colour temperature, which is really important because they go much, much warmer than people think they do. Less is definitely more, which is really cliche, but it’s really true.

How have you seen the industry change throughout the time you’ve been a part of it?

I think lighting design has become recognised as an actual thing. Whereas before, it was always a bit of an add on. More and more we’re doing whole chunks of whole buildings, whereas before we would only ever do the facade, or maybe the entrance because they wanted that to be impressive. That’s a really good thing, the awareness that we’re actually adding things and bringing extra value. And I think people were worried at the start about paying another consultant but I think we’ve shown them that you can pay someone to do the lighting design and it may as well be somebody who knows what they’re doing, rather than someone who kind of half knows or just wants to have a uniformity in a space.

What was the project that put Elektra Lighting on the map?

Probably one of our first in Saudi Arabia in Riyadh. It was the first Harvey Nichols store outside of the UK, and it was 10,000 sq metres. We lit the façade with this big colour changing light, which was the first kind of colour changing facade, I think, in the world. This was in 1998 way before LED, so the fixtures were tungsten with a little colour wheel. We had about 300 of these units with little motors on them and when you pressed the button, the whole facade would go blue or pink. It was revolutionary at the time!

What are your favourite kind of projects to work on?

Now, my favourite kind of projects are new ones. Because we’ve been going for so long, I think I’ve done around 175 hotels, which will have about 500/600 restaurants in them and then about 100 spas, so it’s great when you get given a unique project that you’ve never seen before! We’re working on a cruise ship at the moment, which is interesting because although a lot of the spaces are restaurants and bars, there are constraints as the requirements of a ship are quite different. First of all, you can’t have chandeliers because they swing around all over the place, so everything has to be generally nailed down and locked in place because the constant vibration of the ship just means that they move around all of the time. These projects throw us new challenges like this, too, so it keeps us constantly growing and adapting our design ideas.

Obviously, at the minute, it’s such a strange and uncertain time for the industry. Where do you see Elektra Lighting going at the end of all of this?

We’ve always gone where the work is. So, we’ve just got to be aware of trends and if there is work in retail, then we will make sure we are working on retail projects. The pandemic has thrown a lot of stuff in the air and we still don’t know where it’s going to fall yet. We’ve seen the high-street decreasing recently and we have had a few projects where we basically converted large chunks of shopping centres into restaurants, leisure centres, etc and I that think will continue and possibly expand.

How do you see lighting design changing in the next couple of years?

I think LED has more or less peaked now, there’s not going to be any significant major developments. I think controls will advance and affect a lot of stuff. We’ll start seeing domestic and residential markets. Decent control systems that you can put in your house will be available, even if you’re not particularly technically minded. There are currently 100 different control possibilities we have and 20 years ago, you could get a Lutron or Dynalite system and that was it. There are so many other ways of doing it now, and I think that’s where we will see the biggest changes.