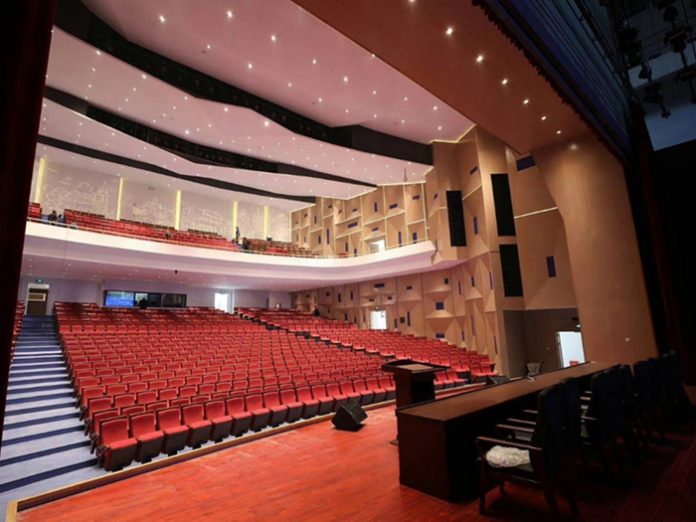 With over 100 years of history behind it, Nantong Middle School in China’s Jiangsu Province is now looking to the future, with a new auditorium installed with high-performance Martin Audio loudspeaker systems.

Founded in 1909 by famous Qing era industrialist and educator Zhang Jian, Jiangsu Nantong Middle School is well known across the province and the country. It is one of the first middle schools in the province set up in modern fashion and its alumni include many politicians, nationally renowned artists, award-winning scientists and even five Olympic gold medallists. The new multipurpose hall in the Chongya Building on the main campus was dedicated to celebrating the school’s 110th anniversary, and the school required a high-quality sound system to suit the building. Their choice was the Martin Audio MLA Mini, for its consistent sound field coverage and high resolution, as well as the level of control offered by the Display optimisation software.

The system itself comprises two sets of MLA Mini, supported by two CDD Live15s, two
CSX218 subs, and three CDD5s. For fill, a pair of portable Blackline F12+ was specified
—which can be relocated subject to requirement—along with two installed XD12s. The system is entirely driven by Martin Audio amplification, in the form of an MA5.2K, and a pair each of MA2.8Q, and MA3.0, optimised by four of Martin Audio’s DX0.5 dedicated processors. All Martin Audio components were supplied by Beijing Pacific Budee, whose Sales Manager JT Liu stated: “We are very proud to have provided this unique Martin Audio sound system that students and teachers at this school can enjoy for many years.”

Over 5,000 leaders, successful alumni, retired teachers, and other dignitaries attended the
school’s anniversary celebration and theatre dedication ceremony, and were able to hear the new sound system at first hand.

In summing up, Martin Audio’s Managing Director, Dom Harter said: “We are grateful to this prestigious School for their faith in Martin Audio and to Budee’s ongoing passion to deliver our signature sound, coverage, consistency and control in China.”