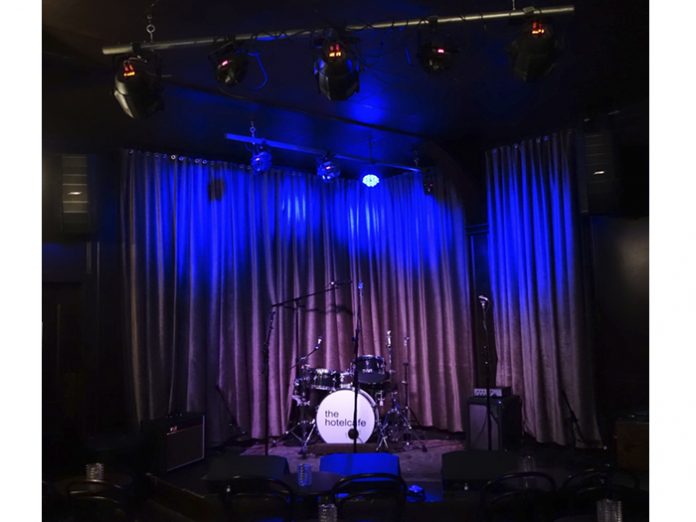 Hollywood venue The Hotel Café has become a go-to place for intimate sets by great singer-songwriters, both in its main room, opened in 2000, and the second room, opened in 2016. The venue, whose two intimate spaces accommodate between 50 and 180 people, respectively, has hosted performances by such artists as John Mayer, Katy Perry, Adele, Sara Bareilles, Hozier, Ed Sheeran and Lucinda Williams. These rooms are capable of some very big sound, with sonic quality commensurate with the talent in them, thanks to the installed P.A. systems from Bose Professional.
Hotel Café’s main room is equipped with a Bose Professional RoomMatch DeltaQ Array Loudspeaker system – one RoomMatch module on each side of the stage buttressed with a RoomMatch RMS218 dual-18 subwoofer (powered by one PowerMatch PM8500N networked amplifier for the RoomMatch speakers and an additional PM8500N for the subwoofer). The club’s second room has been Bose-equipped since its opening in 2016, with a pair of self-powered F1 Model 812 Flexible Array loudspeakers attached to the wall on either side of the stage, with two 1,000-watt F1 Subwoofers on the floor underneath the F1 arrays. The main room, an already-established venue with a reputation for great sound, was kicked up a notch with the upgrade to RoomMatch – thereby making it an even stronger draw for artists and the industry pros they work with.
“We’ve had the RoomMatch sound system in here for the last six years, and when the second room was opened three years ago, the F1 system was the choice to install. Both of them have substantially elevated the sound here,” said John Wells, the club’s senior front-of-house mixer. “In fact, the second room has never had any other sound than Bose. And the sound in both rooms gets stellar reviews, from patrons and artists. You’ll see artist managers and record producers here to see and hear artists perform, and they’re the most critical audience of all. But once the set settles in and the show goes on, they’ll walk by the FOH console and you’ll see them give you the thumbs up letting you know the sound was great. The biggest compliment we get — and we get it often — is that the live show sounds like a record.”
The artists who perform at the Hotel Café also agree. Troy Ramey, a singer-songwriter from Sea Cliff, New York, who has played the venue twice (once on each stage), said whether he played through the F1’s or the RoomMatch system, they were able to communicate his style of soulful, emotive music. “As a vocalist, I pay particular attention to how my voice sounds in a room,” he said. “I’m super happy when I see a Bose system, because it boosts my confidence a hundred percent ahead of a show. I know the audience is going to hear me the way I hear myself.” Troy knows Bose well: he owns and tours with his own Bose L1 Model II and L1 Compact portable line array systems. “No matter what kind of venue I’m playing, I know the sound will be what I want to hear and I never have to worry about feedback,” he said. “So when I saw that Hotel Café had Bose systems, my confidence skyrocketed.”
John said Troy’s experience is typical — artists love playing the rooms, and Bose sound helps create the kind of environment that makes them want to come back again. “We have such a wide array of musical styles in here, from folk to rock to jazz to electronica and hip-hop,” he said. “The Bose sound systems can handle it all.”
pro.bose.com