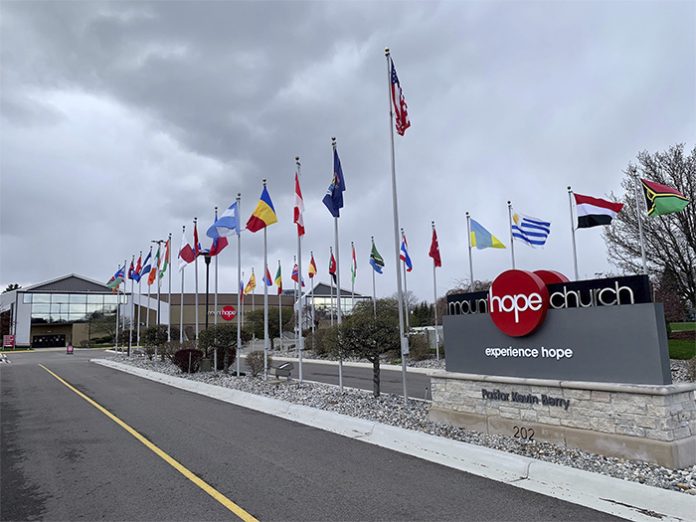 On choosing the eMotion LV1 Live Mixer, Dave commented: “We have two LV1 systems in use in our broadcast studio and the second in our road system. Our first LV1 rig started out for our livestream, then we pulled it to use for FOH during a long weekend statewide youth conference and then back to broadcast. Its timing back to broadcast was rather strange, since that was when the COVID-19 quarantine in Michigan began, and the LV1 has been an incredible solution during this crazy time.”

“We decided that we needed a long-term, cost-effective solution that had crazy flexibility and ease of use, but with amazing sound. In addition, sound quality out of the box has to be number-one, and flexibility has to be second. We only used out-of-the-box plugins and ran a full-band production with IEMs, and it sounded amazing. The best part was that I felt so confident that the techs could run, patch, and troubleshoot any issues that I didn’t feel the need to stick around. The point is that there is a younger generation that is more comfortable with two screens than they are with any large-size console. That is what the LV1 offers. Is that unique? In my opinion yes, and it’s very smart on the part of Waves.”

Dave added: “Another great thing about the LV1 is that for the most part it is plug-and-play. Obviously, it’s great for a large church, and I even see guys traveling the world and running large tours with this system. And, I would speak to the small churches and say if you’re looking for a tool that’s easy to set up, operate, and give you the ‘large console’ options – but with low cost – this is for you as well. This is also why we have chosen Waves for our ‘tech in a box’ setup for our future campuses. We need quick plug-and-play with amazing sound, but small in size.”

He added: “When it comes to networking and portability the LV1 is super simple. Get a supported switch, plug in, and go! We do run a full Dante® audio network, simply because this was in place prior to the LV1. We convert using a DiGiCo Orange Box to Waves SoundGrid® and have never once had an issue. I have seen systems with very expensive switches and some, like ours, with a $100 switch, and guess what? They sound the same. Our Waves SoundGrid Extreme Server and Orange Box are actually in our control room about 300 feet from where we mix broadcast, without issue. Another big point for networking is the ability to remote into the system and control or troubleshoot with a mobile system. This is a key part of our ‘tech in a box’ solution for mobile campuses, and the ability to help a volunteer remotely and train them is priceless.”

He remarked: “We packed our FOH in one modified Studio Flyer case. If you do your homework and really check out everything you can do with the LV1, and then you realize it all fits in one flight case, it’s almost unreal! I remember as a young kid dreaming of this stuff. And the footprint in some of our smaller venues is also key. We can experience the functionality of our large main sanctuary in smaller spaces such as our children’s ministry. It’s simply perfect.”

On his must-have Waves plugins, he noted: “The Dugan Automixer is huge. We run a post-service recap simply using three mics (nothing huge), but I can, within seconds, turn on the Dugan plugin with these mics, turn them up, and feel confident they are at one level for broadcast. The F6 Floating-Band Dynamic EQ is a dream plugin. We use this on most channels to both expand and reduce where needed. We also use the F6 on our band group, side-chained to our vocal group, to ever-so-slightly notch out a path for vocals.

We run the Abbey Road TG Mastering Chain on the master buss. By itself, it adds clarity, and we also use it to spread out and glue our final mix. The L2 Utramaximizer gives you the volume that you need and consistency in your mix. The CLA-76 Compressor / Limiter (Bluey) on vocals has become my favorite. I can’t always describe what it does to vocals, other than the obvious compression, but it just adds so much clarity and control. Lastly, the Waves Vitamin Sonic Enhancer has to make the list. We use this on keys to add a stereo spread on certain frequencies.”

He continued: “I also have to give a shout-out to the Waves Tech Support network of people that are all invested in the LV1. Waves live phone support is first-class! I made an error installing updates the day before a service, and they had me up and running in no time. Also, the Waves Facebook groups have a wide range of people, from touring professionals to people like me, and they are always there to help and answer questions. In addition, Waves offers many online courses and other options such as meet-and-greets with tours; also worth mentioning is that MxU has a crazy number of videos that have a great way of breaking down audio (and lighting). So, the overall support is first-class.”

Dave summed it up: “Our plan is to roll out the eMotion LV1 into every one of our venues (Sanctuary, Youth, Children’s, Chapel and Symposium) within our facility. We also have a goal to launch 100 campuses in the next five years, where most of them will require sound-support, and the eMotion LV1 will be part of a standard solution. My take on the LV1 is that you are only limited on sound quality based on your ability. Considering that most major touring acts and recording artists use Waves plugins on their records, it’s amazing to realize that you start with a raw system that allows you to build your sound using those very same tools. It’s like having an open toolbox with unlimited tools right in front of you. The Waves eMotion LV1 really is only limited to the operator’s ability. Out of the box, it’s next-level.”