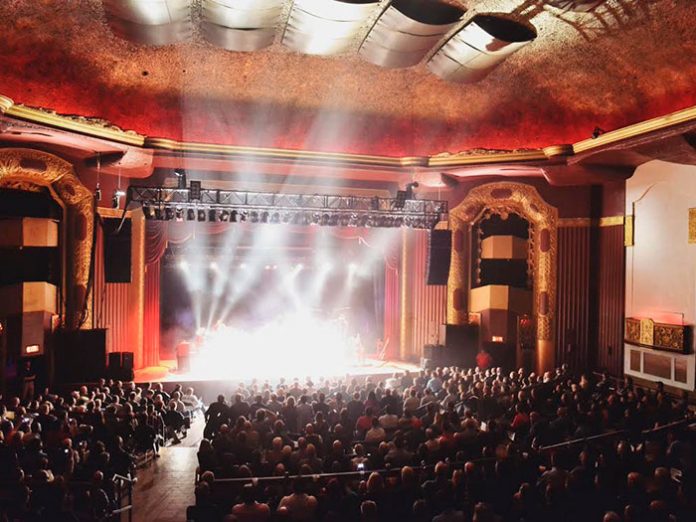 Royal Oak Music Theatre in Royal Oak, Michigan, is a historic cinema turned performance venue that has stood as a testament to the diversity of entertainment, as well as the resilience of the area, since 1928. After partnering with promotional entertainment company AEG Live in 2007, Royal Oak Music Theatre (ROMT) has become one of the Detroit area’s preeminent venues, hosting a steady stream of live performances from Alabama Shakes to Skrillex, the band Perry to Social Distortion, as well as a wide variety of other events.

ROMT recently sought to upgrade its lighting system in order to make it more attractive to a variety of clients and chose to go with Elation LED fixtures for the progressive benefits they provide like greater reliability, less maintenance and increased energy efficiency, all of which translates into a lower cost of ownership.

Brad Raymond, Production Manager at AEG Live, who spends much of his time at Royal Oak Music Theatre, among other venues, explained how the decision to go with Elation lighting came about. “We’ve hosted Elation road shows and trainings at ROMT, the most recent in September, and have had a long relationship with Rob Ludwig at Elation rep firm Five Lakes Marketing. One of the reasons we started our relationship with Elation was to make the Royal Oak Music Theatre a much greener space compared to an older venue with a 120K house rig. That meant upgrading to LED.”

Rob Ludwig has been visiting Royal Oak Music Theatre much of his life and has worked closely with AEG and ROMT on the transition to the LED system. “I’ve been going to the Royal Oak Music Theatre since I was a kid so it’s a special place to me,” he stated. “I’ve also known Brad for many years. He is very approachable and holds people accountable, which are qualities you need in a good Production Manager. He came up with a great plan and showed accounting why it was important to update their rig to LED. AEG gave him the green light to do something special by going as green as possible. They were thinking long term and not just about the bottom line today. Don’t get me wrong, they had a budget; they just wanted to spend wisely. I commend businesses that have that kind of foresight so I was certainly excited to work on the project with Brad.”

Brad and Rob sat down together and talked about how to bring the Royal Music Theatre’s lighting rig into the 21st century. “We shared a lot of ideas and although we both agreed that white light is needed for many applications, we also agreed that we had a chance to design a system based on colour,” Rob stated. “So going green, as Brad wanted to do, wasn’t much of a stretch.” After meeting with a local dealer to look at Elation’s range of LED fixtures, Brad and Rob came up with a solid plan for replacing ROMT’s gear over time. Rob commented: “Between Elation’s LED fixtures and their Platinum Series — an extremely short arc and efficient lamp – we were able to re-design their system to achieve his ultimate goal.”

Lavishly decorated, the multi-use art-deco theatre is an exceptional surrounding for any event. Accommodating up to 2,000 guests, it is ideal for events large or small. Besides the steady stream of live shows, it hosts a variety of corporate events, weddings, bar / bat mitzvahs and more.

The lighting upgrade consists of a range of Elation LED moving heads, PAR lights, battens and matrix panels, and while flexible enough to handle the wide variety of events, its low maintenance benefits are also being felt. “With the change to LED we don’t have to worry about changing bulbs, which is great,” Brad said. “Climbing to change them was a nightmare. They were also very expensive. With our new LED house lights for example there is little maintenance as they’re self-enclosed units and there have been no issues. It is our intention to be all LED within one year.”

Because many artists that play ROMT bring their own ground-supported rig on truss sticks, the lighting upgrade gives ROMT the possibility to supplement those rigs with lighting from the air. Brad completed the lighting design himself, spreading previously installed Elation Platinum Beam 5R Extreme and Design Wash LED Zoom moving heads, installed in the venue two years ago, and the new LED fixtures across an upstage, midstage and downstage truss.