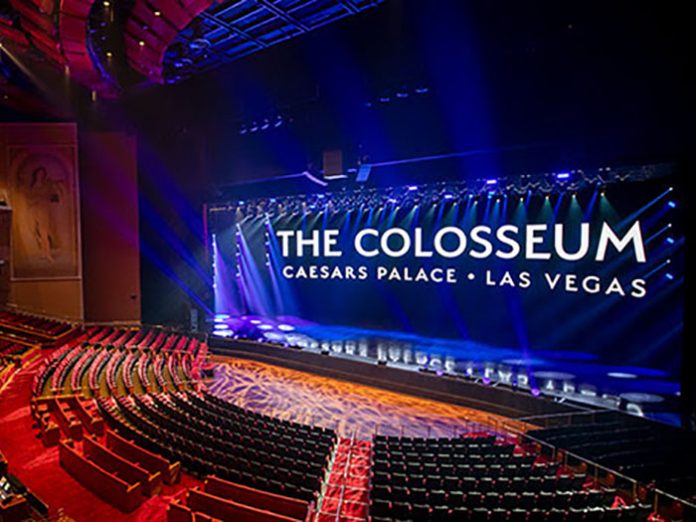 Following a summer hiatus for significant technical and design upgrades, The Colosseum at Caesars Palace relaunched in September to herald a new era at Las Vegas’ premier music showcase. Originally completed in 2003 to house Celine Dion’s record-shattering residency ‘A New Day,’ since first opening, The Colosseum has relied on Meyer Sound reinforcement systems supplied and installed by Solotech, a global leader in audiovisual solutions and services.

The tradition continues with the latest generation of audio technology as a new, Solotech-supplied LEO Family system anchored by LYON line arrays has been installed to support the award-winning venue and ensure that guests have an unmatched live entertainment experience with some of the world’s most celebrated superstar talent.

Keith Wright of Production Specialists of Las Vegas (PSLV), who represented Caesars Entertainment as a consultant on the project, was fully aware of the storied success of The Colosseum. “Meyer and Solotech had proved themselves with 16 fantastic years in that venue,” Keith recalled. “They knew this room better than anybody else, and through all that time their support was unmatched.”

Overall scenic and audiovisual design were again entrusted to world-renowned Montreal theatre designers Sceno Plus, but with Wright supervising the specifics of AV design and integration. Solotech was again selected to supply the Meyer Sound system, and this time also handling the video and lighting as well. Playing an early but pivotal role in securing Solotech’s participation was Francois ‘Frankie’ Desjardins, currently the company’s vice president of R&D, who was a principal designer of the widely heralded original Meyer Sound system at The Colosseum.

“Although I was not involved in the system design this time, I felt it was important for Solotech to provide this new system,” he said. “The Colosseum is an iconic theatre and certainly one of the most celebrated entertainment venues anywhere in the world. We wanted to continue as part of that tremendous success story.”

Frankie expressed confidence in the decision to select a Meyer Sound solution for The Colosseum. “The first system had served the room for more than 15 years, so reliability and longevity were important factors in the selection of the brand-new audio system. Once given the design, we worked to ensure the installed system would achieve all goals with hopes of exceeding expectations for guests of the all-new Colosseum. We always strive to achieve the best of the best. People remember your most recent project, not the one from 15 years ago.”

“All the video, audio and lighting systems here can work in unison or separately, depending on how the acts want to use them,” said Solotech Project Manager David Cerullo. “We have fibre optic connections for both audio and video so if we need to send audio cues to video or lighting, that can happen. It’s powerful and incredibly flexible, and from my perspective, it’s an extremely impressive improvement. The Colosseum is probably the best sounding and best visual theatre on The Strip right now, and we are so proud of the work we’ve contributed to this beautiful venue.”

Cerullo also commended project partners PSLV, IATSE Local 720, and Meyer Sound for smooth teamwork that enabled completion of the complex project within a compressed seven-week window. “The people from Meyer Sound were here from the day we walked in until the day we finished. They showed tremendous support not just for us at Solotech, but also as a vendor to Caesars Entertainment by working so closely with PSLV. All in all, it was an amazing collaborative effort.”

One of the first resident acts to test the new Colosseum was legendary American rock band Journey, which dominated the schedule through most of October. Journey returns for four more shows at the end of December, including New Year’s Eve.

“The guys on stage love the feel of this room and the way it enhances their performances,” said the band’s FOH Engineer Keith “Meaux” Windhorst. “They’ve said many times how great it sounds on stage and that’s a reflection of what’s happening out here as well.”

The response of the system is familiar to Windhorst as Journey has been touring with a similar LEO Family rig in recent years. “There was a comfort factor, right out of the gate,” he related. “You run up that first fader and it’s immediately right in the ballpark. It sounds fantastic, it sounds familiar, and that’s what I’m looking for.”

Windhorst’s sentiments were echoed by the band’s co-founder and lead guitarist Neal Schon. “From the moment I walked on stage I felt this was an amazing place to play,” he said. “We love the way that it has an intimate feel for a big venue. You can see people quite far back into the room. I can tell the sound is good because I can see that they are getting it, that we are connecting with them through this great sound system.”

Since opening in 2003, The Colosseum has welcomed nearly 10 million fans and changed the live music experience on the Las Vegas Strip by pioneering the modern artist residency model and successfully welcoming entertainment’s biggest superstars to the city. Although it boasts a capacity of 4,300, no seat in The Colosseum is more than 145 feet from the stage. The current line-up of resident artists includes Jerry Seinfeld, Keith Urban, Mariah Carey, Reba, Brooks & Dunn, Rod Stewart and Sting with more exciting announcements to follow.