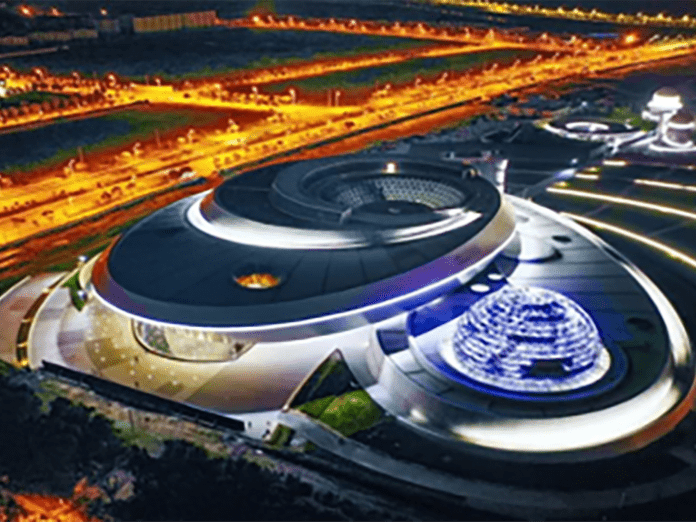 On July 18, 2021, the Shanghai Planetarium opened in a blaze of bright lights nearby the Dishui Lake in Pudong New Area, Shanghai. It covers an area of 58,603 sq metres and a building area of 37,741 sq metres, making it the largest planetarium in the world. With the vision of “shaping a complete view of the universe”, Shanghai Planetarium strives to stimulate people’s curiosity, encourage them to appreciate the starry sky, understand the universe and think about the future. The main exhibition area includes three parts: “Homeland”, “Universe” and “Journey”, which show a panoramic view of the vast universe, create a multi-sensory exploration journey to help the audience shape a complete view of the universe. The “Homeland” exhibition area starts from the starry sky that we have been missing for a long time. It encourages you to stop and look up at the dazzling array of stars with the most advanced optical planetarium in the world, and then step into space to marvel at the huge earth, moon and sun, and lead the audience to walk the solar system and appreciate the meteorites, and then face the magnificence of the Milky Way to understand our position in space. The “Universe” exhibition area presents the wonderful phenomena of the universe in a panoramic view from the five dimensions of time and space, light, gravity, elements and life and the many interactive exhibits take you to explore the laws of the evolution and operation of celestial bodies. The “Journey” exhibition area features a river of brilliant scientific stars, showing the great journey of human exploration of the universe, as well as the beautiful vision of the future development of astronomy and space exploration.

The “What If” theatre is located in the Universe exhibition area and uses a highly immersive 360º circular screen with 7.1.4 3D immersive sound to create an enveloping universe for the audience. Shanghai Magic Digital Creative Technology Co., Ltd. (“Magic Digital”) undertook the important task of audio and video design and production for the immersive experience of the “What If” theatre.

The 7.1.4 loudspeaker layout of the theatre is tailor-made for the architectural structure and sound field of the theatre and does not meet any existing audio production standards (such as Dolby Atmos or Auro 3D). It is a typical “user-defined” environment. This layout posed a problem for Magic Digital. At the beginning of demo production, whenever sound effects producers took audio files mixed in a standard surround sound recording studio and played them in situ, they were always “very different” from what they heard during production due to the different placement of the speakers.  In ordinary surround sound recording studios the lack of sky channels severely compromises the live effect of immersive sound. The project site only had a replay environment with no production equipment. The sound effects production staff of Magic Digital went back and forth between the urban recording studio and the planetarium, but they were still unable to produce satisfactory immersive sound effects. After studying on-site sound reinforcement and immersive sound production systems, the sound designer Chen Baizhou decided to move the Merging audio production system to the site and turn the theater into a mixing studio to achieve “what you hear is what you get”.

The sound reinforcement system of the “What If” theatre is an audio network based on the Dante protocol. Magic Digital uses the Pyramix MassCore audio workstation system based on the RAVENNA protocol as the core of audio production with a MERGINHG+HAPI handling the outputs. Through the AES67 protocol, the two are successfully connected on-site in Dante Controller. In this way, the theatre loudspeakers become monitor speakers for the sound effects production. The sound effect producer uses the “user-defined” bus function in Pyramix to input the position coordinates of the live speakers into the software one by one, so that in the Pyramix audio workstation, they have a 3D immersion that is exactly the same as the live speaker layout and position. Now the “What If” theatre has become a production environment for the mixers. Through the processing of more than 100 audio tracks and dozens of effect plug-ins, the sound effect production masters of Magic Digital, a 12-channel 7.1.4 3D immersive sound file of the “What If” theatre version of the Shanghai Planetarium was finally completed. The finished immersive sound file perfectly fits the live acoustic conditions and speaker layout to achieve a satisfactory 3D experience.

Mr. Zhu Jie, technical director of Beijing Dream Formula Digital Technology Co., Ltd., the support centre of Merging Asia Pacific, was honoured to lead his team in participating in the project implementation. Merging Technologies’ equipment will accompany the public on their journey to find the truth of the universe.