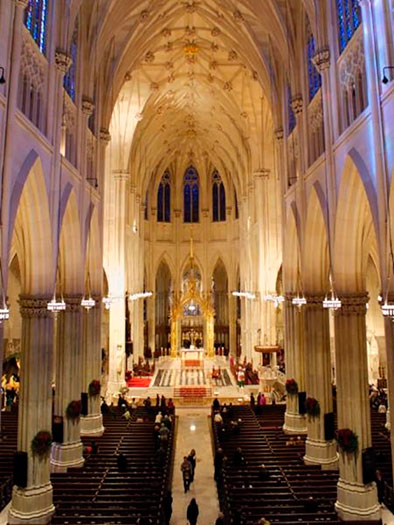 When New York City’s historic St. Patrick’s Cathedral required a major upgrade to its audio visual system, Masque Sound a leading theatrical sound reinforcement, installation and design company, answered the call, providing a complete custom audio equipment and installation package for one of the country’s most recognisable and visited houses of worship.

The Cathedral of St. Patrick is a decorated Neo-Gothic-style Roman Catholic Church, and a prominent New York City landmark. The seat of the archbishop of the Roman Catholic Archdiocese of New York, and a parish church, it is located in Midtown Manhattan. On St. Patrick’s Day 2012, the archdiocese announced that the 135-year-old cathedral would undergo a massive five-year, three-phase, 175-million-dollar renovation due to crumbling bricks, faulty heating, and acid rain and pollution damage, which has eaten away at the building’s Tuckahoe marble. Structuretone served as the general contractor and Jaffe Holden was the audio visual consultant.

Part of this undertaking was a new audio visual system. “The system, provided by Masque Sound, and installed by B & G Electrical, allows the church to utilise the most current audio and video technology,” said Matthew Peskie, install Department Manager, Masque Sound. “Also, with the installation of a fiber infrastructure, the facility is able to look forward to any future technological advancements. The audio visual system was designed for people of varying skill sets to use it, allowing both experienced and novice operators to deploy it adequately, depending on the service.”

The construction team faced several challenges with this project. Chief among these was maintaining the historic structure while routing the cable for the infrastructure. B & G installed a complete wire-tray system along the triforium level of the church, which fed down an old chimney to gain access to the basement, and then up to the mix position of the audio visual equipment. Most of the main fiber runs were in the range of 800 to 1500ft. Keeping the clean look of the columns was also a concern, and this was addressed by using Wiremold for dressing wire down the columns to both speakers and audio visual panel locations.

The cathedral needed to maintain a fully functional audio visual system at all times for the seven daily worship services it conducted, and for special events, during the construction. Masque Sound achieved this by bringing in a temporary 28-loudspeaker system and mix-position equipment. The team mounted these speakers to the scaffold, routing them to temporary amplifiers located at the triforium level.

For the upgrade, the crew members installed new audio visual racks at six locations throughout the cathedral’s grounds. They interconnected each rack location to the mix position with a fiber infrastructure. There are multiple strands of both single-mode (OS2) and multi-mode (OM4) fiber that land on fiber patch bays at each rack.

The elaborate PA system features 30 K-Array KA10 amplifiers located primarily at the triforium rack locations, with 58 KK102 speakers mounted to columns throughout the nave and altar. The spot or flood pattern on the KK102 speaker allows for greater control of the coverage at each location. The size and shape of the speaker also enables the speaker to be slightly concealed within the flutes of the column. Unlike the previous system, where all speaker wire came up from the floor and was routed along the column, now all speaker wires come from above and are then, in turn, routed along the column. This allows for a clean look at the base of the column.

The choir array is comprised of two 12-box Alcons LR7/90 line arrays. The team mounted the arrays on custom cantilever steel tube stock poles to allow positioning along the north and south ends of the choir loft. The small size of the boxes gives the arrays the ability to blend into the surroundings. The arrays are driven by three Alcons Sentinel amplifiers located in the music room rack.

The team at Masque Sound also employed a Shure Axient system for added flexibility with wireless microphone use and coordination. The eight channels of wireless have frequencies controlled by the Shure AXT600 Spectrum Manager. The AXT600 is constantly scanning the RF environment and updating the list of useable and non-usable frequencies. It then communicates these frequencies to the AXT400 Dual Channel Receivers, as well as the AXT100 Bodypack Transmitters and AXT200 Handheld Frequency Diversity Transmitters. Wireless workbench software controls all the receivers over IP, while AXT610 ShowLinkdevices, located at the mix position and at the choir loft, handle transmitter communication. RF Venue RF Optix devices were also utilised in order to transmit the RF signal over fiber from the remote antenna locations.

“Whenever you get a chance to work on a project that involves such a historic and recognisable building as St. Patrick’s Cathedral, it is an honour and a privilege,” added Matthew. “We couldn’t be more pleased with the end result of the new system.”