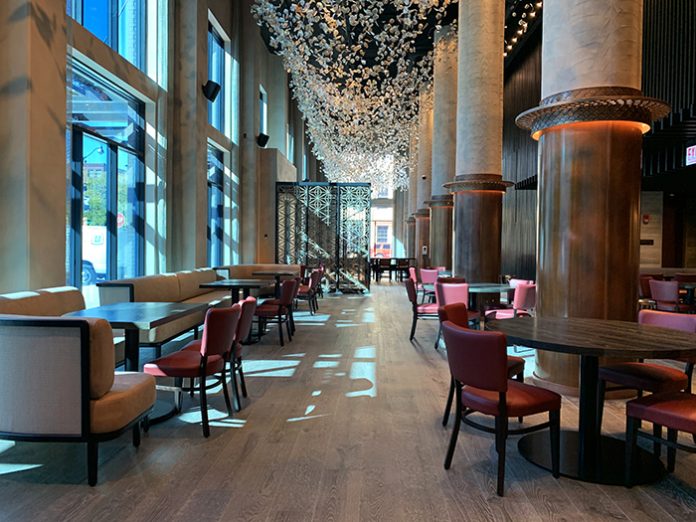 Nobu Hotels blend modern, cool luxury and minimal Japanese tradition into the concept of a lifestyle hotel — which is exactly what Robert De Niro, Chef Nobu Matsuhisa, and Meir Teper wanted when they decided to open a property in Chicago.

No detail would be overlooked. The development team sourced the industry’s leading architects, designers, GCs, suppliers, and hospitality experts for the stunning 115-room hotel, restaurant and rooftop scene, complete with an indoor lounge and outdoor terrace.

Technology had to contribute to the guest experience, and sound was no exception. Nobu wanted a team of experts to come in and run with audiovisual and structured cabling and to own the entire project. Encompass AV not only came highly recommended, it gave the team an opportunity to flex their design, acoustics, infrastructure, and overall hospitality strengths.

Encompass AV plugged in with the developers early, rethinking the entire buildscape for more efficient structured cabling that ensured greater network infrastructure. They also wired the entire building with performance for Nobu’s high-end system requirements, as well as low-voltage and electrical systems, all while integrating seamlessly with other vendors on the site.

System design was focused entirely on the guest experience from display screens that come down on mechanical lifts with the touch of an iPad, to audio systems that deliver extremely high-quality sound across Nobu’s many settings.

One of the key elements in this was Martin Audio’s differential dispersion technology to provide even coverage throughout the hotel. “Nobu had never used Martin Audio before, so they were a little hesitant, but I pushed it through as I knew it would deliver what they wanted,” recalls Timothy Pickett, President, Encompass AV. “They had heard some of our other projects in Chicago and I explained that if they wanted us to deliver the same quality, then Martin Audio was the way to go.”

Pickett and the Encompass AV team decided on a similar system design for each of the public spaces but tailored to the specific needs of each area. The CDD series forms the backbone of the solution in each area to ensure that even coverage and high audio quality is maintained throughout the hotel. With the pool, spa, fitness areas, restrooms, lobby, conferencing space, rooftop bar and, of course, the centrepiece restaurant to cover, dozens of CDD6 ultra-compact two-way passive loudspeakers have been deployed from the entrance all the way up to the rooftop.

“With Nobu, this is not a nightclub, so we’re not looking for SPL, we’re looking for even coverage with a really tight, nice low end throughout the entire space,” explains Pickett. “We wanted people to be able to walk through every area and not hear any dropouts or comb filtering, and we were able to accomplish that with the CDD series.”

The award-winning CDD6 delivers the hotel’s smooth, even coverage thanks to its Coaxial Differential Dispersion technology which achieves ‘point source’ summation of the LF and HF sections — eliminating off-axis variations in frequency response associated with non-coaxial designs. It also improves on conventional coaxial designs thanks to the static waveguide that merges with the unique cone shape to maintain the dispersion pattern all the way out into very high frequencies.

Coverage was only one aspect that led to the selection of the CDD speakers, with the aesthetics playing just as important a role. The compact footprint of the CDD6 and its close mounting capabilities for walls and ceilings ensured the loudspeakers could be easily hidden in every space. “In areas like the rooftop bar we were able to hide all the CDD6 speakers above the ceiling, so you really don’t see them,” recalls Pickett. “It made a lot more sense to us to use more of the smaller cabinets which could be installed out of sight more easily, than fewer of the larger CDD family members that could have been more of a challenge to hide.”

With a world-renowned chef behind the concept for the hotel, its signature restaurant is the obvious centrepiece. As such, this needed to be the focus for Encompass AV. “The real prize in the building is the restaurant,” says Pickett. “High-quality sound and even coverage were definitely requirements. They needed that feeling where you walk into a high-end restaurant and it sounds the part, that it has that feel to it and carries that energy with it. The CDD6 was able to deliver this perfectly. The sound is phenomenal, and everyone has been very happy with it.”

Of all the Nobu properties around the world, the Chicago experience comes with the best sound, by far.