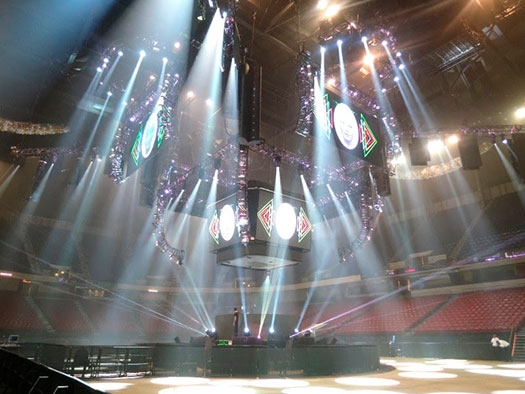 Last November saw the opening of Los Angeles’ latest contribution to elegant, contemporary cuisine: Otium. The new restaurant, located in the heart of Los Angeles’ cultural corridor directly beside The Broad museum, has drawn the extraordinary talent of Chef Timothy Hollingsworth and offers rustic cooking in a relaxed, open kitchen environment. The restaurant features a myriad of elegant dining environments, including a patio with a gas fire pit, a semi-private dining room with sweeping views, and a large oak dining table situated directly aside the open kitchen. An equally elegant audio solution provides cohesion among all these environments, made possible by Powersoft Ottocanali amplifiers.

Adrian and Gabriel De Pamphilis, from Los Angeles-based Fyxx Entertainment, which handles integrations for dozens of restaurants and other facilities in and around the metro area, specified the audio, telephony, surveillance and IT systems for the restaurant. “Lately, we’ve been using Powersoft with speakers from Martin Audio – this combination works the best,” said Adrian De Pamphilis of Fyxx Entertainment. “The reason we pick Powersoft amps is because we don’t have to deal with them. We install them, they sound great and we know they are going to do what they are supposed to do.”

The rack, which is located in the restaurant office, includes three Powersoft Ottocanali 4K4s driving the audio for the entire facility. Each channel on the Ottocanali is capable of delivering 250W over eight Ohms, and the systems design of the restaurant is set up into 16 zones – all controlled by the central rack unit: “With the three Powersoft amplifiers, we have complete control of the audio for each area: the bar, dining rooms, kitchens, patio, entrance, hallways and the rest of the restaurant. The result is a cohesive system where patrons don’t perceive any dips or valleys in the audio coverage or sound pressure level. Early on, when the decision to have a stereo set up in the main areas of the restaurant was made, we knew that the eight channels capabilities of the Ottocanali was the right and the only way to go” said Gabriel.

The installation of a high end audio system was very important for the owners of the facility: “Otium is a very fun place with an open kitchen floor plan – there is a lot of energy coming from the kitchen and they wanted to continue this energy throughout the whole environment,” observed Adrian. “They didn’t want to see any speakers, but wanted the perfect sound system.”

To pair with the Powersoft Ottocanalis, the Fyxx team integrated (24) Martin Audio CDD5 surface-mounted speakers and (36) Martin C6.8T ceiling mounted speakers, coupled with four Martin Audio CXL112 B subwoofers for the interior areas. The speakers were placed in a symmetrical pattern. “It was a highly reflective acoustic environment, with square lines,” said Gabriel. “We chose the CDD5 because of their wide dispersion pattern, and essentially put them all over the place.” The subwoofers – along with the surface mounted speakers – were neatly concealed in the ceiling and custom made furniture so they would not be visible to patrons. In addition to the Martin Audio speakers, QSC AD-S32T waterproof speakers were installed for the exterior patio area, along with three EAW SB 120zp waterproofed subwoofers.

Just before opening, the Fyxx Entertainment team came in to test the audio. “When we put it all together and fired up the audio, it sounded great with relatively flat EQ settings – that is the mark of a great audio system,” said Adrian. “If you use the best ingredients to create a meal, you won’t need a lot of salt or pepper – it is just going to taste good. I am always explaining to our customers that every element of an audio system has to be of the highest caliber to achieve a great result. And put simply, Powersoft makes the best amplifiers.”

Perhaps the most important reason Powersoft was specified for the job was because of performance reliability: “This restaurant is operational around the clock, so the amplifiers have to work all the time,” Gabriel noted. “We know that Powersoft amps won’t fail, and that we will never have to send techs out to fix anything. To be frank, if we chose another brand of amplifier, there is a much higher chance we’d get service calls, and we don’t want that.”