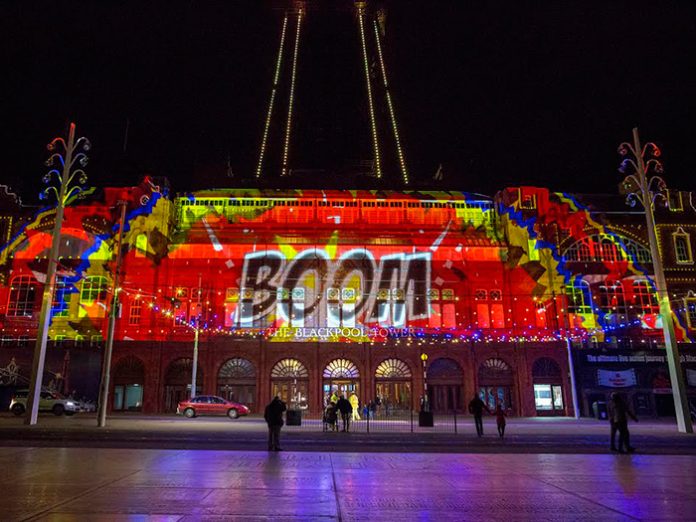 Projection mapping’ has become an industry buzz word in the last couple of years and the iconic ‘Blackpool illuminations’ – among the world’s most historic festivals of light is home to the first permanent projection mapped show in the UK, scheduled to run for the full two months / 66 day ‘Illuminations’ period each year from now on.

LightPool is a collaboration between London-based Ross Ashton and The Projection Studio who storyboarded and created the content, and Edinburgh based War Productions who’s Alistair Young produced the technical design and supplied the hardware and control.
The two companies have worked together on previous projects, and Alistair suggested that he and Ross join forces to pool their extensive knowledge and experience of projection mapping monuments to answer a tender put out by Blackpool Council.

Their proposals were selected from some stiff competition. Their ideas were chosen for the originality, strength and integrity of the creative concepts as well as the super-bright fully optimised projection design.

LightPool has been developed in conjunction with Blackpool Illuminations, the Arts Department of Blackpool Council and arts organisation Left Coast, and projects onto the base of Blackpool’s famous 158 metre high tower.

Ross and Sound Artist Karen Monid were given a set of parameters to start developing the stories and content which included Blackpool’s history. They were able to interpret these as they wanted to produce the two 10 minute shows. The first, “Entertaining the Nation”, tells the story of how Blackpool has been at the forefront of public lighting for over a century – ever since their first “Artificial Sunshine” installation in 1897 which featured eight arc-lights set up on the promenade to the full-on colourful and technically ambitious extravaganza it is today.

It also explores the history of Blackpool as an entertainment destination, including the life and works of some of the greatest artists to act, sing and dance there. It is firmly centred around the historic venues which have enriched and enthralled the cultural heritage of the city.

The second show, “The Most Amazing Show on Earth”, features Blackpool as a world centre of excellence for dance and features Laurence Llewelyn-Bowen as the Master of Ceremonies. Choreography is by Mimi Ramsey and features performances by local legends, The Funny Girls along with the Urban Dance Project and Phil Winston’s Theatre Works.
Karen Monid produced the soundtracks for these pieces, researching music and sound that reflects Blackpool’s history. “I found many lesser known Blackpool based music works which we adapted for these pieces.” she said. “It was especially exciting to find ‘The Tower Waltz’, which we had Phil Kelsall play on the Tower Wurlitzer. It is possibly the first time that this piece has been played at the Tower since its opening in 1894.” Other specially composed music for the project was written by Howie Saunders.

The projection system creates a high-impact image measuring 83 metres wide by 17 metres high, fed by 14 x Panasonic PT-DW17K2 projectors – the latest Mark 2 units delivered by Panasonic in time for the installation although it was initially specified using the Mark 1 versions.
These are set up in a 7:1 double stacked portrait array, which, after detailed laser scanning and modelling of the space, was the most efficient was to cover the building with pixels and consistently maintain the required 150 lux brightness so vital to the success of the project. Watchout was specified for control as a stable, reliable and flexible system, they are using the latest Version 6.

In physical terms, getting the awesome results everyone wanted on the building presented multiple challenges. The first was that it is a dark red brick surface with lots of glass windows, so not an ideal! The second is the high levels of surrounding ambient light emanating from the Esplanade, the tower and from the windows of the building itself, which have now been fitted with blinds. The third is the myriad of lamp-posts, signs and assorted other street furniture in the way of the projection path!

To eliminate shadows from the street furniture, they have had to apply a serious amount of masking when programming the Watchout, and also ensure that each section of the building is hit by two sets of projectors – lined up at different physical angles – effectively allowing projection to come from ‘behind’ the lamp-posts.

All the warping, blending and stacking has been done manually, and the blend overlaps are extremely tight, with just 20 pixels, but this enables between 20 and 30% more light to hit the building.

The projectors are mounted on the side of a specially modified artic trailer which can be driven in to place, secured for the evening and then removed later when the shows end.

The technical team from Blackpool Illuminations was headed by Richard Ryan with Richard Williams overseeing the installation. Greg McLenahan of World Wide Lighting who works closely with Blackpool Council and the Illuminations teams, was instrumental in integrating the permanent Tower and semi-permanent Esplanade Illuminations lighting – including around 200 million pixels of LED – in with the LightPool projection show when it is running. This works particularly effectively during the ‘strength test’ section of the visuals show.

Ross concluded: “It’s been fantastic working with an iconic building like the Blackpool Tower. Both Alastair and I were well aware of the importance of this project as a first in the UK. We are delighted with the public reaction and hope that this will be a game changer in the UK outdoor projection market.”